You are here: Home / Books / Why is Gothic Literature Still Popular in the 21st Century?

Why is Gothic Literature Still Popular in the 21st Century?

Since the French Revolution, the Gothic’s popularity has reserved a special place in literature; we in 21st 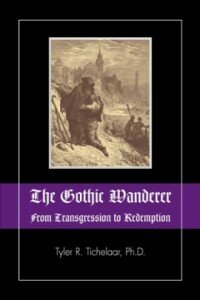 century being no less fascinated by it than the 19th-centry Romantic.

In this Preface to his book, The Gothic Wanderer: From Transgression to Redemption; Gothic Literature from 1794 – present (Modern History Press, 2012), author Tyler R. Tichelaar introduces his readers to a brief history of the rise of Gothic literature. To learn more about the book, visit http://www.gothicwanderer.com/.

The Gothic’s popularity arose at the time of the French Revolution as people questioned the legitimacy of their government—the monarchy—as well as the governments that replaced it, and the entire social order and its institutions, especially organized religion. Paranoia and conspiracy theories were common—our political concerns have not changed much today and continue to be reflected in our fiction. Just as the early Gothic novels theorized that certain secret societies were manipulating the French Revolution, today, we are no less fascinated by conspiracy theories—whether it be Dan Brown’s The Da Vinci Code with its alleged revelation of the Catholic Church’s cover-up of the lost bloodline of Christ’s children via Mary Magdalene (the Gothic has always loved to pick on the Catholic Church), or beliefs that the government is withholding information from us about everything from terrorists to UFOs. In the twenty-first century, the U.S. Government has even been accused by some of staging the 9/11 terrorist attacks as an excuse to invade Iraq.

Concerns about the patriarchal system, legitimate children, and the sanctity of the family were common in early Gothic novels—how much more today when divorce is prevalent and children are frequently born outside of marriage, mothers take men to court and have DNA paternity tests given to verify who a child’s father may be, while in politics we hear about the need to return to “family values.”

The Wandering Jew is one of the key figures in the Gothic, and although we may not be cursed to wander like him, our jobs and the economy often force us to move to unfamiliar places, to find employment in sectors we feel uncomfortable with, to experience displacement. At the same time, the Wandering Jew is a metaphor for the plight of the Jewish people. The effects of the Holocaust—a horror the nineteenth century Gothic novelists never could have imagined—still haunt us, and the Jewish people still struggle with prejudice and violence directed against them, even after having a homeland established in Israel.

The Rosicrucian Gothic wanderer is obsessed with finding the secret to eternal life. Are we any less obsessed with it today when we value youthfulness, and when studies predict that half of Americans born in the late twentieth century will live to see age one hundred? The Gothic fascination with life-extension continues for us today.

The Gothic concern with gambling is no less relevant today. Gambling in Gothic literature is viewed as a transgression, a way to achieve wealth to advance oneself in society, and consequently, it usually results in destruction for the gambler and his family. Today, gambling is an even bigger problem than it was two centuries ago. We constantly hear tales of lottery winners who waste their millions, only to become bankrupts. We know of people who invest in the stock market, or worse, get taken advantage of in Ponzi schemes, only to lose everything. We continually worry about the economy, and most of us continue to have financial difficulties or an unhealthy relationship with money, while longing for wealth that we falsely believe will solve all our problems.

Working conditions became a Gothic concern with the rise of the Industrial Revolution. In Dickens’ day, horrendous working conditions were being fought against. In the early twentieth century, the rise of unions helped to solve many of those problems, establishing an eight-hour work day and the weekend. But how many of us today find ourselves working long hours? What industry did to the Victorians, modern technology has done to us, making us connected 24/7 and perhaps improving communi­cation but also resulting in expectations to work constantly.

Perhaps no novelist in all of literature has been more visionary or speaks more to our time than the Gothic novelist Mary Shelley. The issues in Frankenstein are the very issues of stem cell research, cloning, and the other quandaries of science we continue to argue over today. The need for responsible science is now more important than ever. In The Last Man, Shelley introduced the fear of a worldwide plague which today remains a terrifying possibility. Shelley’s vision of the future is frighteningly accurate in many ways. In recent decades, the scare of AIDS and the bird and swine flu have made people fear worldwide human extinction as a possibility. The possibility of nuclear war and biological warfare has made it possible that man could someday be responsible for his own extinction, unintentionally, or intentionally. The recent film Contagion (2011) is just one of many works that speak to these fears.

In the Victorian period, a religious crisis arose with the introduction of theories of evolution. Organized religion began slowly to lose its hold over people. Those shifts have only continued to the present day. The understanding that we are spiritual beings having a human experience has become a mantra in recent decades. More and more people have quit subscribing to organized religion but come to describe themselves as spiritual, and this desire to connect with our spiritual (super­natural) selves has led many down less traditional Western paths, including to eastern religions, beliefs in reincarnation, listening to entities who channel their messages through humans, an emphasis upon “the Goddess,” and the creation of new religions such as Scientology. In many cases, a general move away from institutional Christianity has not led to atheism but what might be termed a spiritual reawakening that allows humanity, if not the autonomy from God that Milton’s Satan sought, then at least the “faith, hope, and self-esteem” that Percy Shelley dreamt of for humanity.

The vampire is the nineteenth century Gothic wanderer figure who has remained most popular in the twenty-first century and continues to be reinvented. Despite his “evil” nature, he has become glamorous and attractive; the lines between good and evil have been blurred; we now have dark heroes and sympathetic villains. The continuing popularity of the vampire two centuries after he was first introduced to English readers speaks to how much the Gothic still influences our lives today.

While the bulk of this study will cover nineteenth century British Gothic fiction, I will offer in the epilogue some insight into how the themes of that period’s Gothic literature have continued and been transformed in twentieth and twenty-first century literature, some still noticeably Gothic, such as Stephenie Meyer’s Twilight series and Anne Rice’s vampire novels, while other influences are hard-pressed to be termed “Gothic” but still have Gothic elements or owe a debt to the Gothic, including such popular figures as Tarzan and Batman.

The Gothic wanderer is still with us today; he has lost a lot of his angst over the centuries, but the figure still fascinates us. This study will hopefully help to explain a little of why we love the Gothic—because we discover in the Gothic wanderer our very selves.

Visit http://modernhistorypress.com/ to learn more about the Modern History Press and browse its titles.

Superior. Renowned. Legendary. Each of these words defines Abu Garcia. From its inception on the banks of the Mörrum River in Svängsta, Sweden, Abu Garcia, then AB Urfabriken, has … END_OF_DOCUMENT_TOKEN_TO_BE_REPLACED