Over the past five weeks, people gave their hearts to a horse with white socks named, California Chrome. This horse, winning both Derby and Preakness, increased excitement. But, with Belmont, it almost felt like the royals had come in and trounced the commoners, then turned up their noses to remind us and the ‘peoples’ horse of our place in the social stratosphere.
California Chrome is one of those hero’s that represent the ‘normal’ hardworking person; he makes people want to wave a flag in the air and scream “God Bless America” even if they know nothing or care nothing about horse racing to begin with. This is a horse that won the first two ‘biggies’ before Belmont escaped him. Unfortunately, this is NOT the first time this has happened.

In fact, not since 1978 has a horse won the Triple Crown. One of the reasons for that, many say, is the fact that a horse can be placed in the Belmont without ever competing in the Derby and in the Preakness. Which means, the horse is fresh and already has a huge edge over the other horses to win the long race.

But…is that fair? For some, California Chrome’s loss of the Triple Crown represents a huge flaw in the system of horse racing. Think about it. Take the NFL, for instance, if you are unsure about horse racing. The AFC and NFC Champions have been crowned. But before they can play each other in the Super Bowl, a ‘loser’ is picked from a hat in each Division and are given a shot to dethrone the champions before actually playing a Super Bowl. A) Second chances are American Idol’s rules and should not be used in football. B) Can you imagine how angry a Seahawks fan would have been if that was the rule and, say, the Saints came in, had a god day and headed to the Super Bowl all because they were given another chance?  If so, then you might understand how angry Steve Coburn is right now. He believes that this ridiculous rule in horse racing, allowing a horse to be entered even if they have not run the first two of the big three, is wrong.

The atmosphere of Seabiscuit came out with California Chrome; he had all the makings of a legend: A horse created with absolutely no money
paid for Ma and Pa to have him; a horse with an owner who worked (although Coburn is definitely not worried about where his next meal is coming from now); and a jockey that was a true worker – one of the people. This was a recipe for an American success story!

The debate raging is that Coburn was being a real jerk after the race was won and Chrome did not earn the Triple Crown…but, his reasoning is actually agreed upon by millions across the country. Tonalist won Belmont. However, this is a horse that did not compete in the Derby OR the Preakness. The second place winner was ALSO a newbie, with Belmont being his debut.

When Coburn spoke after the race, it was his final statement that will be replayed over and over again forever: “This is the coward’s way out.” Poor sportsmanship is being attached to Coburn for ‘spoiling’ California Chrome’s sterling image and fantastic ride. Many say the horse deserved better; so does Coburn, however, he thinks Chrome deserved better by being up against other horses that had proved themselves worthy to be at Belmont in the first place.

In sports, bad rules and regulations represent part of the agony of defeat. And as far as the race being fair is concerned, simply put: Yes, it was. Tonalist was the clear winner. And even if he and Commissioner had not been on that track, Chrome was still in a dead-heat tie for fourth place, not third.

Best thing to remember is that California Chrome will go down in history as a bright light in the world of horse racing. Seabiscuit gave heart and soul for the sport, and Chrome is one that should be given accolades for doing the same. He got fans out of their chairs and routing for the guy who no one thought had a chance to win even one of the big three, let alone two. 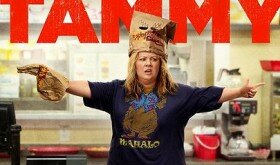 Tammy Film Review by Kam Williams   McCarthy & Sarandon Crisscross the Country in Raunchy Road Comedy   Melissa McCarthy was apparently able to write her own ticket after winning an Emmy for her TV sitcom Mike & Molly in 2011 and landing an Oscar nomination for Bridesmaids in 2012. So, she used that leverage to greenlight a star vehicle where she would not only portray the title character, Tammy, but get to make her screenplay … END_OF_DOCUMENT_TOKEN_TO_BE_REPLACED

The Man from Essence by Edward Lewis with Audrey Edwards Foreword by Camille O. Cosby Atria Books Hardcover, $25.00 374 pages, Illustrated ISBN: 978-1-4767-0348-0 Book Review by Kam Williams “I know what they say about me—that I am too quiet and low-key, unassuming, even clueless. Not the one you’d expect to be the last man standing after the smoke has cleared and the body count taken. Yet here I am, in the position to tell a remarkable … END_OF_DOCUMENT_TOKEN_TO_BE_REPLACED

For our March Walk on White, we will be feauring works by Elizabeth Devries, Coco Eriksen, Helen Harrison, Vera Vasek, and more of your favorite Harrison Gallery artists. Like us on … END_OF_DOCUMENT_TOKEN_TO_BE_REPLACED

West Virginia’s Retreat on White Mountain Rock   Set high in the Allegheny Mountains, West Virginia’s premier Land Report Certified Community overlooks the world famous Greenbrier Resort. Ask any single owner why The Retreat on White Rock Mountain is now their home away from home, and the answers are guaranteed to run the gamut: the quick convenient drive from Washington, Baltimore, and other major city centers, the long … END_OF_DOCUMENT_TOKEN_TO_BE_REPLACED

Hip Blog, Refinery 29, Recommends NeriumAD!   The word it out!  Bring on the BUZZ.  When a product gives you REAL RESULTS, friends tell friends.  And that is exactly how Nerium has spread across the country and now into Canada!   Check out what Refinery 29 has to say!  http://www.refinery29.com/anti-aging-cream#slide-5   With a track record of over $400 million in sales in just 30 months mostly with one product … END_OF_DOCUMENT_TOKEN_TO_BE_REPLACED

Respect the Elements! Sailors Foul-Weather Gear Evolves for North America's Sport Fishing and Powerboat Enthusiasts   Staying dry and comfortable with Gill NA  is a necessity! The one thing that benefits anyone going on the water is quality gear, boats, rods, reels, lines, lures and technical marine grade clothing. Whether to protect you from poor weather, rain, wind, blasting along at 70MPH or as importantly, protection … END_OF_DOCUMENT_TOKEN_TO_BE_REPLACED

The Fall of the Wimbledon Women ~ Amy Lignor When it comes to tennis, certain ‘scenes’ come to mind; from the sweat, tears, and overworked muscles to the finale where the crowned champion falls on their knees and then holds the trophy above their heads, feeling like the King or Queen of the World while the flashbulbs go crazy. And although there have been ups and downs thus far, especially on the ‘female’ side of the court, Maria Sharapova gets … END_OF_DOCUMENT_TOKEN_TO_BE_REPLACED

Could It Be This Easy to Look Younger? Just apply the Nerium AD night cream at night and rinse in the morning.  Nerium AD is for aging skin and results on the faces of both men and women prove it works.  And the clinical trials prove it is 10 times better than anything else out there.   Check out these results. http://www.neriumsupport.com/downloads/real_results_ppt.pdf   And we have a 30 day money back guarantee!  Want to know how … END_OF_DOCUMENT_TOKEN_TO_BE_REPLACED

Ah…Circus Animals! The mighty lion is King; roaring loudly at the small dude, he wants nothing more than to grab that whip and chair and show the guy exactly who’s boss! The elephants are the lumbering giants who bring awe and cheers from the crowd. But, the giraffe is…under-appreciated. Not only must he ride across the country in that big circus train with his head through the roof, getting all kinds of mosquitoes stuck in his teeth, … END_OF_DOCUMENT_TOKEN_TO_BE_REPLACED

The Animals Are a Huge Part of Saving the Planet  ~ Samantha Lewis If your neighborhood is like others out there, you are in the suburbs where the sprinkler systems are going on and off, and the park is down the street for both kids and families to enjoy in the summertime. Here, you have most definitely noticed stray pets wandering around every so often. If you are in the big city, perhaps not as many strays appear, but no matter where you may … END_OF_DOCUMENT_TOKEN_TO_BE_REPLACED