There are moments in history that made various locations memorable, for one reason or another. And in a small town, in the blistering heat of New Mexico, one incident – THE incident, if you will – occurred in 1947 and changed that small town into a

strange little mecca. This incident still brings thousands of visitors every year to “see” if friends of the ones who crashed there in 1947, will somehow pick the July 4th weekend to come back and claim their missing…relatives?

Yes, it was night. Out in the desert, it’s more than dark. Yet one evening in July, 1947, a part of the sky lit up like a heavenly beam was cast upon the Earth for a split second. Then…the mystery began. An object no one could ever quite put their finger on crash landed on a ranch located thirty miles north of tiny Roswell, New Mexico.

The Roswell Army Air Field (RAAF) issued a statement (without thinking…or had they planned it all along?) claiming to have recovered a “flying disk.” An article ran on the front page of the Roswell Daily Record, and the very next day, RAAF reversed its statement. They said no “flying disk” had crashed, it was nothing more than a weather balloon, they said. Therefore…move along, folks. Nothin to see here.

Well, as we all know, that revised statement made another bright light appear in a great many peoples’ imaginations. There was somethin to see there, they thought, believing that a cover-up of presidential proportions was being made in regards to Roswell, New Mexico. And this incident, this one moment in time, has continued to be a topic of heated controversy and debate more than 60 years later.

Now…each year there are more and more speakers who come to the UFO Festival in Roswell (June 30th – July 3rd), and with each year, these speakers bring new facts to light regarding the “truth.” There was a UFO crash, they say, and there were small ‘creatures’ that needed to be covered-up and transported out of Roswell as fast as possible.

This weekend the UFO Festival is busy. Thousands have come to town in order to get in on an alien costume festival, an alien chase that brings in thousands of attendees, as well as a full schedule of speakers offering ‘new data’ being released about an incident that is not leaving imaginations anytime soon.

All year in the town of Roswell hotels have been built for the many that have been booking since last year to make sure they do not miss any “new” news. New restaurants, new vendors, a slew of entertainment acts – people have flocked this weekend to Roswell, enthusiasts as well as skeptics, in order to join in on the celebration of one of the most well-known incidents in the history of the world.

Among the authors and speakers are Don Burleson, who will be discussing “Alien DNA: Some Reasonable Conjectures;” Yvonne Smith, speaking about UFO Abduction Experiences; as well as an entire panel who will each address their own personal abduction experiences and the information/data they have attained over time.

Larry Holcombe will talk about, “The Presidents and UFOs,” offering up new evidence that supports Roswell as being an Extraterrestrial Event that the inner core of Washington, D.C. knew about back in the 1940’s. Ken Johnston will speak about the Moon Apollo Archives, and Stanton Friedman will “Debunk the UFO Debunkers.”

Every detail of the Roswell cover-up will be discussed, and the list of fun activities for children and adults is never-ending. Foods, crafts, collectibles, UFO books and items – the list goes on forever as to what very cool gifts and information can be attained in Roswell, NM over the weekend. So while you’re considering where the best place would be to watch an amazing fireworks show, take into consideration the “one” place on the planet where you can see the lights while chasing those hard-to-get aliens from outer space.

From #Black Lives Matter to Black Liberation by Keeanga-Yamahtta Taylor Haymarket Books Paperback, $17.95 286 pages ISBN: 978-1-60846-562-0 Book Review by Kam Williams “The eruption of mass protests in the wake of the police murders of Michael Brown in Ferguson, Missouri, and Eric Garner in New York City have challenged the impunity with which officers of the law carry out violence against Black people and punctured the illusion of … END_OF_DOCUMENT_TOKEN_TO_BE_REPLACED

ACRONYM TO FOLLOW by Peter Brav   Finally Our Day has come There’s a Day for everything For doughnuts, siblings, eight track tapes Grilled cheese, daughters and sons to work Encouragement, Alzheimer’s Coffee, math, chewing gum Blasphemy, yo-yos And now finally One for us Truly a Day to celebrate National Don’t Shoot An Unarmed Brother Doctor King Not Seeing Progress George Orwell Laughing It Is So About the … END_OF_DOCUMENT_TOKEN_TO_BE_REPLACED

New Home Sales Jump in April By Burt Carey Sales of new homes hit their highest rate since 2008 in April, according to the Commerce Department’s U.S. Census Bureau. April sales increased 16.6 percent over March figures, which correlates to a seasonally adjusted rate of 619,000 home sales projected for the year. The median price of those new homes was $321,000, the highest median price ever recorded. That’s up 9.7 percent … END_OF_DOCUMENT_TOKEN_TO_BE_REPLACED

FEMA Says: Open Your Eyes or…No Cash by Amy Lignor The horrible news coming out of South Florida is endless, as sea water enters and overpowers the Biscayne Aquifer. Salt water has already been recorded as being located six miles inland in Broward County, but is not likely to stop there. It’s not only the fact that this is a highly populated area, it is also a fact that ninety percent of all South Florida receives its drinking water … END_OF_DOCUMENT_TOKEN_TO_BE_REPLACED 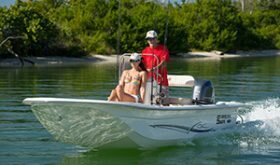 Solve the ‘Dog Days’ Dilemma With These Inshore Tricks

Solve the ‘Dog Days’ Dilemma With These Inshore Tricks By Capt. Gus Cane   Summer time is prime time for saltwater anglers, especially those who love to sight-fish trophy game in skinny water. The bait is plentiful, the fish are aggressive and the action can be fast and furious. Until it gets too hot, that is. When the shallow water temperatures rise into the sauna-sphere, the fish don’t stop feeding, but it is necessary … END_OF_DOCUMENT_TOKEN_TO_BE_REPLACED

Tiger Woods Opts Out of U.S. Open, Quicken Loans By Burt Carey Tiger Woods isn’t ready to stage a comeback just yet. The 14-time major champion sent messages via Twitter and his website Tuesday that he would not be competing at either the U.S. Open at Oakmont next week or the PGA Tour’s Quicken Loans tournament the following week. "While I continue to work hard on getting healthy, I am not physically ready to play in this year's … END_OF_DOCUMENT_TOKEN_TO_BE_REPLACED

Feds Eyeing a Crackdown on Predatory Payday Lenders By Burt Carey The federal Consumer Financial Protection Bureau is proposing new regulations designed to place limits on excessively high-interest loans issued by short-term lenders. The CFPB proposal would require so-called payday lenders to prove borrowers have an ability to repay a loan by the time it comes due – usually by the borrower’s next pay period – without having to … END_OF_DOCUMENT_TOKEN_TO_BE_REPLACED

While Chasing the Red, White & Blue You Can Chase Aliens Too! by Amy Lignor   There are moments in history that made various locations memorable, for one reason or another. And in a small town, in the blistering heat of New Mexico, one incident – THE incident, if you will – occurred in 1947 and changed that small town into a strange little mecca. This incident still brings thousands of visitors every year to “see” if … END_OF_DOCUMENT_TOKEN_TO_BE_REPLACED

Turning the “Ugly” Into a Stunning Emerald “Green”

Turning the “Ugly” Into a Stunning Emerald “Green” by Amy Lignor   We speak about “going green” and revitalizing this country: from little things, like making your own garden healthy, to projects that involve massive amounts of money as huge buildings are constructed from the ground up to be environmentally friendly. It’s hard to put a finger on what constitutes an “amazing” project; a project where the beginning was bleak, … END_OF_DOCUMENT_TOKEN_TO_BE_REPLACED