WEEZER TO PERFROM AT THE ST. AUGUSTINE AMPHITHEATRE

Rock band Weezer is set to perform at the St. Augustine Amphitheatre on Friday, June 6, 2014. Tickets will go on sale this Friday, February 21 at 10am.

Their debut album Weezer (aka “The Blue Album”), producer by Ric Ocasek, has been certified triple platinum in the United States, and remains the band’s all-time best seller. Upon completing the record, Weezer went on hiatus

temporarily as Cuomo studied at Harvard. With help from the Spike Jonze-directed video, the single “Undone (The Sweater Song)” became a hit in the fall of 1994. But by the time the album’s final single, “Say It Ain’t So,” was released in the summer of 1995, the group had gone on hiatus once again, with Cuomo returning to Harvard.

1996 saw Weezer’s much-awaited second LP, entitled Pinkerton, released. It was quite different from ‘Weezer’; the guitars were more gruff, the lyrics were deeper and much more exposed, and the band’s talent and style had matured considerably.  Weezer released three singles from Pinkerton: “El Scorcho”, “The Good Life”, and “Pink Triangle”.  Pinkerton eventually went gold in record sales and has been a steady seller since.

Weezer returned to the studio again to work with Rick Rubin on their fifth full-length album. Make Believe appeared in May 2005 and eventually went platinum in multiple countries. The album gave Weezer their biggest charting album peak yet, hitting #1 in Canada and #2 in the U.S. Make Believe featured the band’s first two songs to top the Billboard Modern Rock Tracks chart, “Perfect Situation” and Top 10 single “Beverly Hills,” which earned the band their first Grammy nomination for Best Rock Song.

2008’s Weezer, (aka “The Red Album”) followed which featured a more collaborative approach toward songwriting and shared lead vocals on tracks. Lead single “Pork and Beans” topped the Billboard Modern Rock Tracks charts for 11 weeks, and its music video won a Grammy for Best Short Form Music Video. The Red Album debuted at #4 on the Billboard 200 upon its release.

Weezer jumped from Geffen to independent label Epitaph in 2010, debuting Hurley at #6 on the Billboard 200 to make it the band’s sixth top 10 album, as well as their sixth top 10 album in a row. The new album was quickly followed by two additional releases: an expanded deluxe edition of Pinkerton and Death to False Metal. The band then took to the road to play Pinkerton & their eponymous debut “Blue Album” in their entirety, in full a tour titled “The Memories Tour,” dubbed “Blinkerton” by fans.

Tickets will go on sale this Friday, February 21 at 10am at the St. Augustine Amphitheatre and Ponte Vedra Concert Hall box offices. Enjoy complimentary coffee and snacks and Weezer tunes from Tonevendor at the Amphitheatre on Friday morning. Save on fees by purchasing tickets here at our box office, walk around the venue and scout your potential seat, and have first pick when the tickets go on sale at 10am. Tickets also will be available at findmytix.com, all Ticketmaster outlets, or by phone at 800-745-3000. 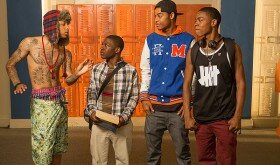 School Dance Film Review by Kam Williams   Nick Cannon Makes Directorial Debut with Help of Star-Studded Cast   Nick Cannon is a versatile entertainer known as an actor, comedian, rapper, radio DJ, TV host and as the husband of pop dive Mariah Carey. With School Dance, Nick steps behind the camera to add filmmaker to his extensive resume.   His jaw-dropping directorial debut is a raunchy romantic comedy that might be … END_OF_DOCUMENT_TOKEN_TO_BE_REPLACED

The Man from Essence by Edward Lewis with Audrey Edwards Foreword by Camille O. Cosby Atria Books Hardcover, $25.00 374 pages, Illustrated ISBN: 978-1-4767-0348-0 Book Review by Kam Williams “I know what they say about me—that I am too quiet and low-key, unassuming, even clueless. Not the one you’d expect to be the last man standing after the smoke has cleared and the body count taken. Yet here I am, in the position to tell a remarkable … END_OF_DOCUMENT_TOKEN_TO_BE_REPLACED

For our March Walk on White, we will be feauring works by Elizabeth Devries, Coco Eriksen, Helen Harrison, Vera Vasek, and more of your favorite Harrison Gallery artists. Like us on … END_OF_DOCUMENT_TOKEN_TO_BE_REPLACED

West Virginia’s Retreat on White Mountain Rock   Set high in the Allegheny Mountains, West Virginia’s premier Land Report Certified Community overlooks the world famous Greenbrier Resort. Ask any single owner why The Retreat on White Rock Mountain is now their home away from home, and the answers are guaranteed to run the gamut: the quick convenient drive from Washington, Baltimore, and other major city centers, the long … END_OF_DOCUMENT_TOKEN_TO_BE_REPLACED

Hip Blog, Refinery 29, Recommends NeriumAD!   The word it out!  Bring on the BUZZ.  When a product gives you REAL RESULTS, friends tell friends.  And that is exactly how Nerium has spread across the country and now into Canada!   Check out what Refinery 29 has to say!  http://www.refinery29.com/anti-aging-cream#slide-5   With a track record of over $400 million in sales in just 30 months mostly with one product … END_OF_DOCUMENT_TOKEN_TO_BE_REPLACED

Respect the Elements! Sailors Foul-Weather Gear Evolves for North America's Sport Fishing and Powerboat Enthusiasts   Staying dry and comfortable with Gill NA  is a necessity! The one thing that benefits anyone going on the water is quality gear, boats, rods, reels, lines, lures and technical marine grade clothing. Whether to protect you from poor weather, rain, wind, blasting along at 70MPH or as importantly, protection … END_OF_DOCUMENT_TOKEN_TO_BE_REPLACED

Tiger Still Has Teeth  ~ Amy Lignor You would think, considering the amount of press Tiger Woods gets whether he wins or loses in the sport of golf, that he was literally the only one who has ever picked up a club or stepped on to a ‘green.’ But this time around, perhaps because victory was not even seen let alone ‘just missed’ by the golf great, the headlines have gone bazaka…with some saying that Tiger did a great job taking his first step at … END_OF_DOCUMENT_TOKEN_TO_BE_REPLACED

Could It Be This Easy to Look Younger? Just apply the Nerium AD night cream at night and rinse in the morning.  Nerium AD is for aging skin and results on the faces of both men and women prove it works.  And the clinical trials prove it is 10 times better than anything else out there.   Check out these results. http://www.neriumsupport.com/downloads/real_results_ppt.pdf   And we have a 30 day money back guarantee!  Want to know how … END_OF_DOCUMENT_TOKEN_TO_BE_REPLACED

Ah…Circus Animals! The mighty lion is King; roaring loudly at the small dude, he wants nothing more than to grab that whip and chair and show the guy exactly who’s boss! The elephants are the lumbering giants who bring awe and cheers from the crowd. But, the giraffe is…under-appreciated. Not only must he ride across the country in that big circus train with his head through the roof, getting all kinds of mosquitoes stuck in his teeth, … END_OF_DOCUMENT_TOKEN_TO_BE_REPLACED

How the Rockets Can be Green This July 4th!   When summer comes along only good and happy thoughts appear. The kids are out of school – free to ride those bikes and head outside for a little freedom after being holed up in the classroom all winter long. Parents are ecstatic because the polar vortex is gone and brilliant sunshine awaits. Weekends can be spent with friends and family, and every aspect of Mother Nature can truly be … END_OF_DOCUMENT_TOKEN_TO_BE_REPLACED