by Jame Moore   Real estate dealings are complex no matter what the size of the property may be. However, when it comes to the large deal there is no company better suited for the job than Bates Land Consortium.   The ultimate closing on the ultimate property; when this is the plan, Patrick […]

July 2013 Here’s what is happening this month with the redrock: 1.  The Utah state legislature’s anti-federal government campaign hits a brick wall called the U.S. Constitution. 2.  Take action for wild Utah this summer! 3.  SUWA’s annual Backyard Bash celebrates our community of citizen activists. 4.  The BLM has a lot of bad ideas for Utah public […] 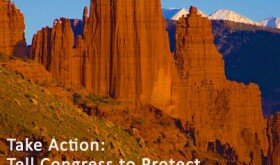 We’re fighting back!   Utah’s politicians, led by Governor Herbert, have launched the greatest attack against wilderness in our nation’s history.  They are trying to seize control of federal lands that belong to all of us – places such as Greater Canyonlands, the Grand Staircase-Escalante National Monument and the San Rafael Swell. We […]

We sound like a broken record lately, but we’re just the messenger.  The Bureau of Land Management’s (BLM) Monticello field office has announced a proposal to add more off-road vehicle (ORV) routes to the 3,000-plus miles of routes in San Juan County that have already been designated. The new ORV route is proposed for this area […]

Utah Doubles Down on Land Grab

As the 2013 Utah legislative session winds down to a close, one thing is abundantly clear — Utah Governor Gary Herbert and his allies in the state capitol are digging in for a protracted fight to gain state control of public lands in Utah. Help SUWA stop Governor Herbert’s land grab. Last year, Governor […]