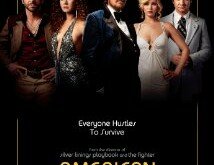 American Hustle Film Review by Kam Williams   In the late Seventies, a half-dozen Congressmen along with a United States Senator were caught on camera taking bribes from FBI agents posing as wealthy Arab sheiks. The elaborate sting in which the disgraced politicians became ensnared was code named Abscam, a contraction of Arab Scam. […]