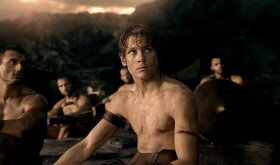 300: Rise of an Empire DVD Review by Kam Williams Sequel Features Greeks vs. Persians in High Attrition-Rate Splatterfest   The bloody epic 300 (2007) chronicled the Battle of Thermopylae in 480 B.C. when a badly outnumbered band of 300 soldiers were sent on a suicide mission to defend Sparta against a horde of over […]

Filed Under: Entertainment Tagged With: 300: Rise of an Empire, DVD Review by Kam Williams