“It was Thursday, June 16, 1966… Less than a year before, President Lyndon Johnson had signed the Voting Rights Act… Stokely Carmichael was now in Mississippi to ensure that the federal laws… would apply to black sharecroppers living in plantation communities…

[Just] released from his latest stay in jail… Stokely’s voice broke through the humid Mississippi night…’This is the 27th time that I’ve been arrested,’ he shouted, ‘and I ain’t going to jail no more… We want black power!’

Carmichael made a case for political revolution. ‘We have begged the president. We’ve begged the federal government… Every courthouse in Mississippi ought to be burned down tomorrow!’

His life changed that night, and so did America’s civil rights movement. Black Power provoked a national reckoning on questions of civil rights, race and democracy.”

– Excerpted from the Prologue (pages 1-2)

Stokely Carmichael (1941-1998) was born in Trinidad but moved to Harlem at 11 where he joined his parents who had already emigrated to the U.S. An outstanding student, he attended NYC’s prestigious Bronx High School of Science and Howard University before turning down a full-scholarship from Harvard Graduate School in order to do pursue his passion, namely, civil rights work in the South.

Stokely rose to the rank of Chairman in the Student Non-Violent Coordinating Committee, in which capacity he would forge a close relationship with one of his idols, Dr. Martin Luther King, Jr. However, he tired of the passive resistance approach after being repeatedly arrested, attacked, intimidated and terrorized by white supremacists for organizing poor black folks who just wanted to exercise their right to vote and to sit at a lunch counter.

Another one of Stokely’s heroes was Malcolm X, a militant firebrand who was no fan of turning the other cheek. And when Malcolm was assassinated in 1965, a huge leadership void was created in terms of African-Americans advocating an “eye for an eye, and a tooth for a tooth” political ideology.

The very next year, Stokely, a charismatic speaker whose magnetism was matched only by his ambition, emerged as Malcolm’s heir apparent upon delivering his historic Mississippi speech during which he coined the term “Black Power.” He rapidly skyrocketed to icon status as he crisscrossed the country on the college and inner-city circuits. In 1966, he also founded the Black Panther Party which eventually blossomed into the preeminent, national, radical organization.

Given Stokely’s notoriety and resume, one would think that a biography of him would’ve been published before now. After all, both Malcolm and Dr. King have been the subject of beaucoup bios.

Perhaps Stokely’s been bypassed because he wasn’t a martyr, or because he left the U.S. for good after marrying singer Miriam Makeba in 1968. Regardless, thanks to Tufts University Professor Peniel Joseph, the fiery iconoclast is belatedly getting his due.

Meticulously-researched and painstakingly-detailed, Stokely: A Life is a fast-flowing, informative read which intimately follows its subject from the cradle to the grave in absorbing fashion. In the process, this powerful portrait effectively repositions him as an uncompromising prophet who played a pivotal role in the struggle for black equality.

A visionary of far more substance than the rallying cry he’d been reduced to by history.

A Haunted House 2 DVD Review by Kam Williams   Marlon Wayans Shock Horror Spoof Arrives on DVD               A Haunted House, an irreverent spoof of Paranormal Activity, co-starred Marlon Wayans and Essence Atkins as Malcolm and Kisha, a couple whose home was invaded by demonic forces. Along the way, she became possessed by the devil and turned on her man, despite the best efforts of an exasperated exorcist (Cedric the … END_OF_DOCUMENT_TOKEN_TO_BE_REPLACED 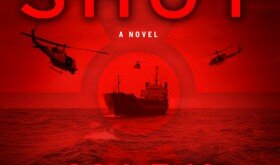 Cold Shot: A Clever Suspense by Mark Henshaw   The number one factor that makes a thriller memorable is whether or not the story is clever. Henshaw brought it in his first novel, Red Cell, and has most definitely delivered once again by creating one of the most clever thrillers in quite a while   CIA Red Cell analysts, Kyra Stryker and Jonathan Burke, are on the case - hunting for an Iranian nuclear scientist who is bound and … END_OF_DOCUMENT_TOKEN_TO_BE_REPLACED

For our March Walk on White, we will be feauring works by Elizabeth Devries, Coco Eriksen, Helen Harrison, Vera Vasek, and more of your favorite Harrison Gallery artists. Like us on … END_OF_DOCUMENT_TOKEN_TO_BE_REPLACED

Republic Ranches: A Brokerage Firm Dedicated to the Land & Devoted to the Client   Large tracts of land perfect for the outdoor pursuits whether rattling deer in the brush country, calling ducks on the prairie, casting top waters for bass on an East Texas lake or working cattle in the big country - ranches, farms, and rural settings that are found across all the eco-regions of  the Lone Star State and Oklahoma. These … END_OF_DOCUMENT_TOKEN_TO_BE_REPLACED

Laugh Until You Cry ~ Amy Lignor I was a kid. I had the best family imaginable, yet I felt out of place. The only thing I could really do well was make up jokes when others weren’t feeling all that good. Even today, as my Mom struggles with retirement and getting older, she’ll cry at times because she feels like a burden (which, by the way, she is not). But even at those times, I can tell a joke, or change my voice in such a way that makes the … END_OF_DOCUMENT_TOKEN_TO_BE_REPLACED

Tidewater Boats Leads Way in Value Segment Center Consoles by Capt. Ted Lund   Whether it’s the diminutive 1784 Skiff or the flagship 2800CC, Tidewater Boats is leading the way for boaters in the market for a center console. Few —if any manufacturers —offer the combination boat lengths, horsepower, performance and materials and craftsmanship in this market segment, according to Tidewater’s Marketing director, Jai … END_OF_DOCUMENT_TOKEN_TO_BE_REPLACED

A Summer of Prodigal Sons

A Summer of Prodigal Sons ~ Amy Lignor There hasn’t been this much ‘buzz’ about prodigal sons returning home since…well, the actual prodigal son returned home. But within the ridiculous web of intrigue that LeBron James has brought to the sports arena – a man who is now heading back to a new ‘welcoming’ fan base who once thought that LeBron’s face on urinal mats was a home décor item that could not be lived without – comes a prodigal son of the … END_OF_DOCUMENT_TOKEN_TO_BE_REPLACED

How Can YOU be Part of the GROUND FLOOR Mega Hit, Nerium, in Canada?  ~ Betsy R. Smith Sales hit $1 million in just 2 weeks as Nerium International hit the ground running in Canada!  And that was just in 2 provinces.  Now open throughout Canada, momentum is building and the operation is running smoothly.   Ever want to be in the right place at the right time?  This is it.  Check out some of the news from the Nerium Blog about Canada … END_OF_DOCUMENT_TOKEN_TO_BE_REPLACED

FIRST PEOPLES BUFFALO JUMP, Southwest of Great Falls, MT   The Interpretive Center wasn't open @ 8 a.m., I just drove on and found signs for the higher access to the Buffalo Jump off the rocks, over the ledge ~THE Buffalo ran and their legs, necks, backs were broken in many places and the People finished them off! I took many pictures and the first animal besides a small flock of Raven was a big fat Rock Chuck who posed for me, … END_OF_DOCUMENT_TOKEN_TO_BE_REPLACED

A Glass Stadium for the NFL Causes Environmental Issues  ~ Samantha Lewis The NFL is all about hitting, ensnaring the QB and building up the number of sacks on your resume. Football is a contact sport, and most certainly would be boring if Manning, and others, simply wore a flag at their waists and nobody ever went down on the turf. However, there are environmental issues to consider when it comes to the NFL. No, we are not talking about … END_OF_DOCUMENT_TOKEN_TO_BE_REPLACED