You are here: Home / Sports / Sports: What Solves Everything?

Sports: What Solves Everything?

Sports: What Solves Everything?

Ask anyone and they will have a different answer. What solves everything? Some will say Santa Claus does (although this will mostly be the ‘under five’ crowd.) The next age group – the ‘tween’ market – will say either cell phones or one hot vampire who has made their lives pure heaven for the last few years. More adult responders will say money (well, most will say money in this day and age). Some will speak of the humble, kind things, such as family, love, friendship, etc., (which are the things that should be looked at as having the ability to solve everything bad in life.) However, just this past week, there is one man who came out to the world and let them know that, in his world, “Winning solves everything.”

Have a guess as to who that was? For golf fans, they already know the answer. Yes, he made it; he not only made it back to the higher echelon of sports, but he has taken the number one spot yet again. It is Tiger Woods and he – after more than a few agonizing years professionally and personally – has reclaimed that No. 1 spot in the world of golf.

The final round at Bay Hill, Orlando – The Arnold Palmer Invitational – brought Tiger back. He won the tournament by two shots, taking the win from the grasp of Justin Rose. Rickie Fowler also made an attempt to knock the Tiger off his perch with a 40-foot birdie putt on the 12th hole to pull within two shots, but Tiger walked through the ‘woods,’ hit a 25-foot birdie putt, 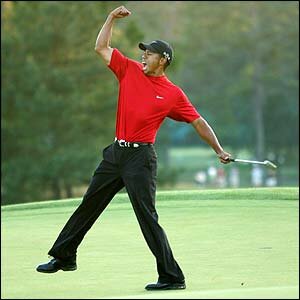 marched after the ball in order to hit it just one more time but – NOT! – there was no ‘one more time’ needed  to get the ball into the cup, it simply dropped in all by itself for a birdie.

There were smiles, there were cheers, shrugging of the shoulders, even some snide grins as if to say, “Yeah, well, you might be back, but you won’t be back for long.”

October 2010 was the last time Tiger could claim being the ‘best of the best’ and, oddly enough, some say he looks far better now than he did back then. Perhaps destruction is good for the putt? Who knew? Woods answer to it all, however, was: “It’s a byproduct of hard work, patience and getting back to winning golf tournaments.” (Yes, it was said with the same sweet smile and humility in the voice.)

It wasn’t exactly Tiger who said ‘winning solves everything’ – it was the promoters of Nike who made sure that everyone knew in their campaign that standing by Tiger when every other sponsor ran away was a good thing. They were right and everyone else was wrong. So there!

This is Tiger’s eighth title gained at Bay Hill that he can boast about, and mirrors his two wins this year, where no one got closer than two shots in the final round. His swagger was back, his smile was firmly planted on his face, and Woods strolled away from the 18th hole with his putter over his head, waving to the fans as he celebrated his eighth win in the Arnold Palmer Invitational – tying a PGA Tour record that no one has come close to in almost fifty years.

Woods spoke about his health to the press, letting them know that once he got healthy he knew that he could turn his game and his luck around. In other words, regaining his health was the first step of the long process to becoming number one yet again. Apparently…his health is back ten-fold.

Now, on to the Masters where Tiger wants to prove that he still is the ‘Master of the Game. “I’m really excited about the rest of this year,” Woods said. The Masters is the win he really wants. He craves another one of those hideous jackets because it will not only prove to the fans and his friends, the media, that he is the best still, but it will also prove to the naysayer’s and haters out there that Tiger – when you knock him down – can get back up and throw it in your face.

When he was number 58, Tiger was most likely the most depressed he’d ever been. This ranking came hand-in-hand with his marriage destruction, his absolute embarrassment on the world stage, and injuries to his leg. Let’s not forget all those sponsors who ran away from Tiger like chickens with their heads cut off so they didn’t have to be a part of a ‘Bieber-like’ collapse with a man of Tiger’s age. Many people believe that this new spurt of energy and good health comes along with the fact that he announced to the world he’s in a loving relationship – dating Olympic ski champion Lindsey Vonn. (Maybe an Olympic champion can return the ‘killer putt’ you need in order to get your own form of a ‘medal.’”)

Can Tiger win the Masters? Absolutely. He has a tremendous chance of winning his fifteenth major championship, (just four behind Jack Nicklaus.) Will he win? Well…that’s up in the air, of course. Anything can happen on those greens – and has. But for right now the Tiger can growl and Nike can sell, the sponsors can drift back his way and the world can cheer, once again standing behind the pride of the golf pack.

Perhaps it is Vonn’s presence; perhaps it was the President’s agreement to play eighteen holes with Tiger in February – whatever occurred in Tiger’s life his wounded ego seems to be healed, for now.

Get Featured, Get Noticed


The Optimal Salesperson® is a professional who consistently achieves ever increasing sales goals with ever decreasing effort. OptimalSalesperson