You are here: Home / Opinion / So Long JoePa!

No, I am not going to debate whether this man ‘did enough.’  I wasn’t there; I have no idea if he should’ve done more so that conversation is out the window for this article.  This is simply a ‘goodbye’ to a man who changed college football from a sport into an art form. 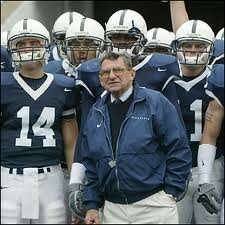 Joe Paterno, whose tenure as the most successful coach in major college football history ended with a screeching halt in November amid allegations that he failed to respond forcefully enough to a sex abuse scandal involving a former assistant, died Sunday.  At 9:25 a.m., surrounded by his family, he passed on at State College’s Mount Nittany Medical Center at the age of eighty-five.

The longtime Penn State head coach was diagnosed with a treatable form of lung cancer shortly after the university’s Board of Trustees voted to fire him.

In December, Joe Paterno had been hospitalized after breaking his pelvis in a fall at his home, and then again in January for minor complications that stemmed from his cancer treatments.

The family statement that was released said that, “It is with great sadness that we announce that Joe Paterno passed away earlier today.  His loss leaves a void in our lives that will never be filled.”

Paterno, who was affectionately known as “JoePa” by generations of his players and football fans alike, was widely admired in football circles for what he called his “Grand Experiment.”  His expectation was that big-time college football players could succeed on the field while still upholding high academic and moral standards.  And it worked.

Joe Paterno was the head coach of the Penn State Nittany Lions for forty-six years; now, that is a record beyond breaking.  JoePa holds the record for the most victories by an NCAA Division I Football Bowl Subdivision coach with 409, and is the only coach in history to reach an incredible 400 victories.  On his long list of achievements, he coached five  teams that won major bowl games and, in 2007, was inducted into the College Football Hall of Fame.

JoePa was a Brooklynite who played both quarterback and cornerback positions when he attended Brown University.  Beginning as an assistant coach for Penn State, it was in 1965 that Paterno was named as the head of the whole darn thing.  And before long he had proved himself by coaching the team to two undefeated regular seasons two years in a row – 1968 and 1969.  National championships would follow in the 1980’s, and he would end up with a record of bringing the Nittany Lions to thirty-seven bowl appearances in all, coming home with twenty-four wins in his pocket.

With this type of record why wouldn’t the NFL want him?  Oh, they did.  JoePa turned down a great many offers over time.  The Pittsburgh Steelers offered him  their head coach position in 1969 – which was an offer that JoePa seriously considered.  But the Steelers eventually had to hire Chuck Noll – who ended up winning four Super Bowls in his first eleven years, and coached for an additional twelve seasons after that.  The New York Gants also reportedly offered Paterno their head coaching spot on many, many occasions during the team’s struggling years during the 1970s and early 1980s.

In addition, Don Canham who was Michigan’s  Athletic Director contacted Paterno in 1969 to see if he would accept the vacant Michigan job.  Paterno turned down this offer as well, and Michigan went on to hire Bo Schembechler.  Another offer came from Super Bowl greats, the New England Patriots (who are now America’s team and has booted the Cowboys from that ultimate position of worship.)  This offer came about in 1972 and, oddly enough, was the only NFL offer that Paterno accepted, yet three weeks later – out of the blue – he decided to back out.  The Patriots ended up hiring Chuck Fairbanks of Oklahoma after that incident.

Yes, Paterno’s long, highly awarded career came to an end in a bad way, considering the man was an icon, when he was fired from his position over the child-abuse scandal that covered the headlines.  However, it speaks volumes for Paterno that his team – his students – fought for the man and protested the fact that JoePa was in trouble, seeing as that he was not the perpetrator of any crime.  Over his sixty-one years at Penn State, Paterno became a beloved figure in that college and according to his players, and everyone else in the football world, the emphasis that he placed on ethics and moral conduct as well as his philosophy on football – to meld athletics and academics together – was THE signature of his coaching style.

On May 16, 2006, Paterno was elected to the Football Hall of Fame after the National Football Foundation decided to change its rules and allow any coach over the age of seventy-five to be eligible instead of having to wait until retirement.  However, on November 4, 2006 JoePa was injured in a sideline collision during a game and, as a result of his injuries, he was unable to travel to the induction ceremonies in New York City.  The NFL Foundation announced that JoePa would instead be inducted as a part of the Hall of Fame class of 2007.

There were so many medals and awards in JoePa’s career.  Unfortunately, some were renamed or discontinued after the Sandusky child abuse scandal came to pass.  But in the end it was his team that stood by him, stood up for him, and spoke volumes about a man who taught them everything from being a good person to a good football player.

Although JoePa is now gone, he’ll never be forgotten, and his legacy will remain as one of the greatest in all of sports.  Most all fans – students, especially – will remember JoePa as a revered figure in the world of football, and that crown will never be tarnished.

Superior. Renowned. Legendary. Each of these words defines Abu Garcia. From its inception on the banks of the Mörrum River in Svängsta, Sweden, Abu Garcia, then AB Urfabriken, has … END_OF_DOCUMENT_TOKEN_TO_BE_REPLACED