You are here: Home / Business / Should a QB be Judged on Height?

Should a QB be Judged on Height?

Should a QB be Judged on Height?

Recently a story appeared in the media reminding everyone of a still undrafted QB who has proven his skill and talent beyond belief, by the name of Kellen Moore. 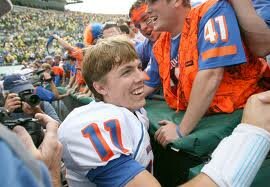 It’s not news that Moore already knows he’s the underdog when it comes to the NFL Draft in the QB position. Let’s face it, we all feel as if we should cheer on the underdog no matter what. It’s these stories and lives that bring on the hope, tears, and the Hollywood movies and huge memoirs that will be bought, written, and seen by a nation of goobers. These men are part of a ‘Cinderella’ story that never seems to go out of style.

The fact will always remain that the NFL is a ‘big man’s game.’ Size dominates, whether it be standing over Center or standing in that Defensive line just staring down the enemy and offering them a glare that would have them running in the opposite direction.

Today, however, I would like to remind the NFL that the short and/or scrappy men were actually the ones most interesting to watch on the field. You know, the ones that many will never forget. Even though they either measured less than six feet or weren‘t the ‘A-Frame’ necessary for a QB – they measured so high and so big in talent and skill that they literally knocked others on their pads as they raced by!

I bring this up because Mr. Moore is a truly skilled and talented young quarterback who owns statistics that boggle the mind of players and analysts. Right from High School, the stats he has attached to his jersey are great in number, yet he is entering the second leg of his career that’s defined by the one stat he can’t change – he stands six-feet tall…and no more.

Moore has been asked about how his height hinders him, or how he thinks it will in the future by reporters. And every time questioned, Moore simply calls forth the industry standard and says, “It is what it is.”

He’s already got enough trouble to deal with. He’s a rookie, trying to make his way in the NFL where his other contenders and men in that ‘superstar’ QB position are, in the end, far taller than he. But Moore doesn’t seem to sweat it, saying that this type of situation is not exactly shocking or new in his life.

Here’s the frightening part: Moore, perhaps, will be overlooked completely. This is a young man who established a new NCAA record with 50 career victories, where he threw for 14,677 yards and 142 touchdowns, coming away with wins in all but three of the games he started in four years. With all that, he received only one call from colleges. Reportedly, he was offered a tryout at Oregon State, and after driving almost three hundred miles was told that the team was only interested in quarterbacks that stood 6-foot-2 or taller.
Another tryout came his way finally from Boise State, where they found him to be “cerebral.” The very smart coaching staff at Boise was beyond impressed that Moore was intelligent and they loved his preparation time, skills and how well he could get hit and jump right back up. (Brett Favre, anyone?)

It didn’t take long for Moore to become the ‘whisper’ around the sports arenas that, although he may be small, he was the toughest QB playing on any field. You would think after working so hard and proving himself for so long that the NFL would’ve heard all the whispers and not turned around and overlooked this stellar athlete yet again. But this is exactly what happened in last month’s NFL Draft – they looked at the 6-foot stature, and he ended up right back where he’d been before. A 50-3 record, 24 straight wins, a contender for the Heisman Trophy for four straight years; even with everything listed, it was unexpected that Moore would even arrive as a draft pick until very late in the proceedings – if at all.

Above all, and certainly unlike any sportsman I’ve ever seen before, Moore kept positive through the whole thing. In fact, he was amazed just watching it play out. By the end of the sixth round, he was conversing with teams that wanted to bring him into an NFL rookie camp as an undrafted free agent. Because of this particular title, Moore has gone into these things with pure fire – the most motivated quarterback on the field.

Is Detroit the place? Well, the Lions already have a franchise QB – Matthew Stafford – as well as a veteran backup QB, Shaun Hill. Apparently, however, there was something that the executives saw when they evaluated Moore, and even the GM  Martin Mayhew, talked about his being cerebral and how well he anticipates things. And, again, this young man stayed truly positive and was actually excited about the whole experience. He raved about working with Stafford and Hill.

Being a man of average proportions is difficult when racing for the job of NFL QB. Most everyone – scouts and coaches – will simply read off what they want like a robot that they wish to be built:

But as we’ve seen over the years there are really only two types for this position. One is the rock-and-roll star who truly wants to run, jump, slam into the defense, get their helmet knocked off – everything. Yes, they will throw over heads if need be, but mostly they think about getting down and dirty when they hit that field. Along with this complete lack of fear, these are also the QB’s who can see the entire field. They know what’s coming, what’s behind, above, in front, on the side – and they are the cerebral ones who have the ability when it all comes crashing down to take the ball and get their own touchdown if need be. (Young, Favre…you get the picture, here).

On the other sideline exists the more elegant throwers. Yes, they can ‘hurry-up offense’ with the best of them, as long as it’s all planned out ahead of time. They don’t think well on their feet. They simply rely on their arm and the skill of their receivers to get open and get the score. They are amazing to watch – usually tall and tower above the rest on the field (Manning, Montana), but they are truly the ones without the ‘scrappy’ attitude that is sorely needed in this game.

Frankly, Moore will find himself a home because more and more coaches will begin to come around to the fact that they NEED the one that can play dirty and will do anything they have to in order to get that ball into the End Zone. When this occurs (and it already is) more and more positions will open for Moore. And, by the way? These are the QB’s that make the game of football seriously fun to watch.

This Moment in sports is brought to you by: www.befirstinc.com

Superior. Renowned. Legendary. Each of these words defines Abu Garcia. From its inception on the banks of the Mörrum River in Svängsta, Sweden, Abu Garcia, then AB Urfabriken, has … END_OF_DOCUMENT_TOKEN_TO_BE_REPLACED