You are here: Home / Cooking / Saturday Morning Chili And Poached Egg While You Wait

Saturday Morning Chili And Poached Egg While You Wait

Saturday Morning Chili And Poached Egg While You Wait

I’ve been making chili quite a few ways for years, but one strategy which is quite simple and valuable for a Saturday morning, when you get up late and your feeling a little lazy, is one I’ll describe here. First, get a decent size sauce pan and put in on the burner. Add a pound of good grade hamburger. Ground chuck may be best. Ground round is good too, but doesn’t have as much fat. If the hamburger is frozen, your still fine. Remove the meat covering and put the meat in the saucepan under very low heat. Keep the pot covered. While the hamburger begins to thaw and then slowly browns, make yourself a poached egg. That’s to get you started because you won’t have chili to eat for an hour or more.

On another burner on high heat put enough water into a small saucepan to cover an egg. Boil the water. Set the timer on the microwave for 3 min. Get out a slice of whole grain bread. Turn the boiling water down to low. Crack and add one egg to the water, then start the toast and the timer at the same time. The toast will come up before the egg is done. Take the toast out of the toaster and cover it with a little soft butter. Go easy on the butter. When the timer goes off remove the egg with a slotted spoon, let the excess water slip back into the pan and slide the egg onto the toast. Check your slow cooking hamburger, maybe stir it a little and then go back to your egg. Add a dash of salt and grind on a little black pepper onto the egg. Sprinkle on a little dried basil and dill. Wait 25-30 seconds and smell the egg–up close. The smell of herbs is unmistakable–you’re ready to eat. Should be great and just what your brain needs to get it ready for completing the chili.

Now you are back with the chili. The hamburger is beginning to brown. You can add a few cloves of garlic (peeled and cut directly into the pan containing the hamburger). You can also add half or more of a finely diced onion. The garlic and the diced onion are optional.

Stir the Red Chile Spice Blend and Ancho chile powder with the meat.Then add a 4 ounce can of chopped green chiles. Stir the chiles into the meat. Wait 2-3 minutes while 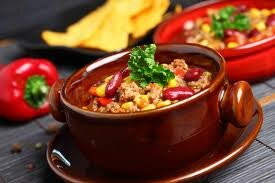 continuing to cook over low heat. Then add a 15 oz can of tomato sauce (I prefer Hunts). Stir the tomato sauce in and then add a 15 oz can of Cannillini beans (white kidney beans). Do not drain the kidney beans first–just add directly to the chili. Increase the heat while continuing to stir occasionally. Bring chili to a boil, then reduce the heat to as low a level as possible, cover the pot and cook for 30 min–then turn off the burner. Keep the lid on except for removing it briefly to add 1/2 cup of dried parsley. Give the parsley a brief stir and recover. The burner is off. Wait 20 min.

While your waiting, go wake up your wife or your friend or whoever has stayed the night. He or she has a treat coming up in a bit. If this is a slow process offer to make her or him a poached egg while he or she takes a shower (optional). Follow the above poaching routine–you can use the same water.

At some point open up the chili and give it a taste. You should not need to add more salt. The Red Spice blend contains a little salt and so does the tomato sauce.  The taste may take a few minutes to evaluate. The spice blend has a delightful but mild after-burn and you may want another taste a minute or so after the first, which will have started to grow on you.

Your guest will have finished the poached egg by now and may want to be involved in taste testing–let her or him give it a try. By now you may need to reheat the chili a bit. Turn the burner on very low while you get everything else ready. You can fill two small serving bowls with a little combined Mexican shredded cheeses as well as finely diced freshly cut white onion. These can be added sparingly to the top of the chili. Some may also like to add a dash of yellow mustard as well. You can skip these additions initially and go with them later in a second helping.

If you have more people to feed, you can double or triple or even quadruple the size of the basic chili recipe by starting with 2, 3 or 4 pounds of hamburger and then increasing every other ingredient  accordingly. After that you’ll probably need to go out and by another larger pot if you need to go up in size further.

Superior. Renowned. Legendary. Each of these words defines Abu Garcia. From its inception on the banks of the Mörrum River in Svängsta, Sweden, Abu Garcia, then AB Urfabriken, has … END_OF_DOCUMENT_TOKEN_TO_BE_REPLACED