With over 40 years of success as a solo singer/songwriter, former Led Zeppelin vocalist Robert Plant continues to be a force in modern music. On his most recent album, lullaby and… The Ceaseless Roar, Plant—whom Rolling Stone readers had already voted as the top rock vocalist of all time in a 2011 poll—essays what are among the finest vocal performances of his solo career, balancing power and pathos—intimate and emotional at times (the keyboard-and-voice ballad “A Stolen Kiss,” recorded starkly in a chapel), atmospheric and incantatory at others (the dramatically unfolding “Embrace Another Fall,” a trip across the Welsh border). 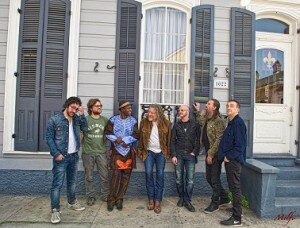 As he contemplated the writing process, Plant had been instinctively drawn back to the impressively eclectic group of musicians he had previously toured and recorded with as Strange Sensation, early in the last decade. With a few members of that combo, he’d cut 2002’s Dreamland, an album of covers dating mostly from the late ’60s psychedelic folk and rock era, and, with more of these live band members, 2005’s acclaimed Mighty Rearranger. Plant explains, “As I was turning towards the east and back across the Atlantic, I was starting to make moves to reunite with my friends from Strange Sensation and see what we could do. We played together for about 15 months and those were such exciting concerts. We changed the name to The Sensational Space Shifters and brought in the amazing Juldeh Camara from West Africa, from the Gambia, who plays the ritti a one-string fiddle, and the kologo, which is the African origin of the guitar. And Dave Smith joined us on drums. So this amazing hybrid developed. This is where it all began.”

The Sensational Space Shifters created a serious buzz on the concert and festival circuit (and, thanks to a legion of fans, all over YouTube). They built a rapport and a sound on stage that allowed them to freely experiment together when they finally reconvened in the studio. Working at Helium Studio in Wiltshire and Peter Gabriel’s Real World complex in Bath with Plant himself as producer, they quickly and intuitively found a fierce groove. Recalls Plant, “There were moments when the songs quite openly and inevitably told us what they would be. They were not only recorded but written on the spot.”

His band’s name couldn’t be more apt, given their ability to move rock and folk melodies into exotic new places with a seeming improvisatory ease. A glimpse at their individual resumes underscores Plant’s own adventurousness in his choice of collaborators. Guitarist Justin Adams had been instrumental in the world music crossover discs of such groundbreaking artists as Jah Wobble and Natasha Atlas, and he produced the world-renowned Tuareg group Tinariwen. Both keyboardistprogrammer John Baggot and bassist Billy Fuller had been key players in fashioning the deep, dub-influenced Bristol Sound alongside Massive Attack and Portishead (and Fuller has been collaborating with Portishead’s Geoff Barrow in a trio called Beak). Young Gambian multi-instrumentalist Camara, who learned his craft from his venerable griot father, regularly collaborates with Adams in a hybrid project called Juju. Drummer Dave Smith is part of the London-based Loop Collective and specializes in jazz and electronic music. Finally, guitarist Liam “Skin” Tyson hails from the chart-topping Brit-pop band Cast.

“It’s so joyous,” Plant told London’s the Guardian of his work with this line-up, “and the great thing is that it’s not a precious metal at all. People come together to do what they want to do, and what they can. The sound Justin and Juldeh make melds into one beautiful thing. The space-shifting is a natural movement.”

So, too, is lullaby and… The Ceaseless Roar: a natural movement, another fascinating progression, for Plant himself. More than any artist of his generation, Plant, an indisputable rock legend, continues to surprise and challenge his audience—and himself—with music that is smart, exciting, and completely of the moment. His decades of experience, his incredible legacy as the front man of Led Zeppelin and as a solo artist, only serve to keep pushing him forward. He’s steeped in history but his ears are attuned to the entire world around him, listening for the future.

Originally from Tacoma, Washington, The Sonics are claimed worldwide to be the first punk band, or garage, or hard rock, or alternative, setting the stage for all that would follow. Their first full-length, Here Are the Sonics, was recorded in Seattle, Washington late 1964 and released early 1965 to widespread raves. A second album, Boom, followed in February 1966. During the recording, the Sonics ripped the soundproofing off the walls at the country and western-oriented Wiley/Griffith studio in Tacoma to “get a live-er sound.” Though the band fell apart between 1966 and 1968, their aggressive, hard-edged sound lived on to become a major influence on punk, garage, and hard rock music worldwide. Notably, they’ve been named as inspirations to Nirvana, Bruce Springsteen, the Fall, as well as scores of other major artists. Since reuniting in 2007, the band has been sporadically active—eventually leading to the 2015 release of their first new album in 40 years, This is the Sonics.

Tickets for Robert Plant and the Sensational Space Shifters with special guests The Sonics will go on sale this Friday, January 15 at 10 a.m. at the St. Augustine Amphitheatre and Ponte Vedra Concert Hall Box Offices. Save on fees by purchasing tickets at the Box Office, walk around the venue to scout your potential seat and have first pick when tickets go on sale at 10 a.m. Tickets will also be available at ticketmaster.com, all authorized TicketMaster outlets or by phone at 800-745-3000.

Money Monster Film Review by Kam Williams Bilked Investor Blames Bombastic TV Host in High-Octane Hostage Thriller    Kyle Budwell  (Jack O'Connell) was a working-class guy from Queens who never had enough cash in the bank to play the market until his mother died and left him $60,000. Against his better judgment, the rough-edged truck driver put every penny of that inheritance into Ibis Clear Capital, a security being promoted by TV … END_OF_DOCUMENT_TOKEN_TO_BE_REPLACED

From #Black Lives Matter to Black Liberation by Keeanga-Yamahtta Taylor Haymarket Books Paperback, $17.95 286 pages ISBN: 978-1-60846-562-0 Book Review by Kam Williams “The eruption of mass protests in the wake of the police murders of Michael Brown in Ferguson, Missouri, and Eric Garner in New York City have challenged the impunity with which officers of the law carry out violence against Black people and punctured the illusion of … END_OF_DOCUMENT_TOKEN_TO_BE_REPLACED

ACRONYM TO FOLLOW by Peter Brav   Finally Our Day has come There’s a Day for everything For doughnuts, siblings, eight track tapes Grilled cheese, daughters and sons to work Encouragement, Alzheimer’s Coffee, math, chewing gum Blasphemy, yo-yos And now finally One for us Truly a Day to celebrate National Don’t Shoot An Unarmed Brother Doctor King Not Seeing Progress George Orwell Laughing It Is So About the … END_OF_DOCUMENT_TOKEN_TO_BE_REPLACED

Is Buying a Hobby Farm in Your Future?

Is Buying a Hobby Farm in Your Future? By Burt Carey More and more Americans are escaping big city or suburb life for one in the country on their own 40 acres, trading traffic and honking horns for the quieter, simpler life of a farmer. They’ve traded business apparel for denim, floppy hats and boots. Buying a hobby farm can be exhilarating and frustrating all at the same time, even for the most prepared among us. Here are some … END_OF_DOCUMENT_TOKEN_TO_BE_REPLACED

Could Environmental Issues & a Lazy Government Destroy Another Artifact?

Could Environmental Issues & a Lazy Government Destroy Another Artifact? by Amy Lignor   We watch this happen every single day: a river dries up, a land mass is destroyed, animals are found dead because of habitats lost, food sources gone – and all of these things are being caused by environmental destruction that can be stopped, if only a lazy government would listen. This time around the subject becomes even greater, … END_OF_DOCUMENT_TOKEN_TO_BE_REPLACED

Tidewater 196DC Paves the Way for Family Fun By Ted Lund   It's tough to find a nearly-perfect compromise boat for the family, but regardless of whether new or experienced boaters are looking for a platform for long fishing weekends, cruising the coast or pulling water toys, Tidewater’s 196DC is about as good as it gets. The 196DC is based on Tidewater's fuel-efficient, wide-beam hull design. By the numbers, the 196DC … END_OF_DOCUMENT_TOKEN_TO_BE_REPLACED

Steph Curry Becomes First NBA Player Ever to Win MVP Award Unanimously By Burt Carey Kareem Abdul-Jabbar won the NBA’s Most Valuable Player award a record six times. Michael Jordan and Bill Russell accomplished the feat five times, and Wilt Chamberlain and LeBron James have four MVP awards in their trophy cases. And yet none of them nor any other MVP accomplished what Golden State Warriors guard Stephen Curry has done in … END_OF_DOCUMENT_TOKEN_TO_BE_REPLACED

Wyoming Landowner Wins Battle With EPA Over Stock Pond By Burt Carey All Andy Johnson wanted was a small pond to provide water for his cattle. What he got was a $16 million fine from the Environmental Protection Agency. Johnson, a professional welder who owns a 9-acre cattle farm in Fort Bridger, Wyo., received permits from the state to build a 40x300-foot pond on an existing stream in 2012. When he built the pond the following … END_OF_DOCUMENT_TOKEN_TO_BE_REPLACED

Finding the Best Summer Travel Deals By Burt Carey Experts say there are three important elements to finding excellent summer travel destinations that help you avoid the crowds at mega-resorts without getting ripped off. They are: Watch out for hidden charges; look for off-season deals on cruises; and pick tourist destinations other vacationers avoid during summer. Sounds easy, right? Here are some great tips to go with … END_OF_DOCUMENT_TOKEN_TO_BE_REPLACED

Jane Goodall Backs the Bears by Amy Lignor   At the age of 82, Jane Goodall is still standing up for the animals that need to be saved. This widely known, popular woman has a full resume when it comes to the intelligence she owns. British primatologist, ethologist, anthropologist, and UN Messenger of Peace, Goodall is mostly connected with her amazing work when it comes to chimpanzees. Work represented in the movies, TV, … END_OF_DOCUMENT_TOKEN_TO_BE_REPLACED