You are here: Home / Books / Not Since The Ripper Has a Serial Killer Been This Engrossing!

Not Since The Ripper Has a Serial Killer Been This Engrossing!

Not Since The Ripper Has a Serial Killer Been This Engrossing!

Murder may be a fine art, but this author has also proven that writing is the finest art of all – and he is the master of it.

No matter how suspense unfolds in the future, the time of ‘Jack the Ripper’ – mid-Victorian England – will always be a true favorite of 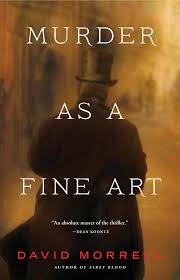 readers everywhere. And in this new novel that same blend of deep, haunting emotions combined with odd police work and a level of the supernatural comes to life and literally jumps off the page.

One of the most notorious mass killings was the Radcliffe Highway Murders of 1811. Much like “The Ripper” when he came along, these murders had Londoners frightened so badly they didn’t even want to step out their doorways into the bustling streets.

One man, Thomas De Quincy, returns to London forty-three years after the murders take place. Thomas is famous for many things, including the fact that he’d once published an essay about the vicious attacks that basically spoke of murder being a ‘Fine Art.’

Almost the day he returns to London, a family is found murdered in a literal bath of blood – mirroring the killings that occurred in 1811. Apparently a crazed killer is utilizing the essay Thomas wrote a long time ago in order to make sure these new murders are state-of-the-art; treating them as Rembrandt would treat a paintbrush.

Thomas, however, is appalled that he is considered the one and only suspect in this new murder (although, with his background, it’s not really a shock). Utilizing his daughter, Thomas takes to the streets and investigates the past and present in order to clear himself, and finds that there are two of Scotland Yard’s finest who are willing to help him accomplish his goal. Or, perhaps, they are simply waiting for him to unveil the fact that he is nothing more than a murderer who (once again) wants to scare Londoners to death.

This novel is not a ‘tale of murder;’ in fact, using that phrase would diminish what this author has created. The scenes that are written literally pull the reader back in time – where they are not only walking the wet, dark streets of London beside a lunatic, but also find themselves witnessing murder with actual awe. Morrell is to be highly commended, because this is one thriller that is beyond thrilling.

Superior. Renowned. Legendary. Each of these words defines Abu Garcia. From its inception on the banks of the Mörrum River in Svängsta, Sweden, Abu Garcia, then AB Urfabriken, has … END_OF_DOCUMENT_TOKEN_TO_BE_REPLACED