You are here: Home / Books / Nobody Walks: Bringing My Brother’s Killers to Justice

Nobody Walks: Bringing My Brother’s Killers to Justice 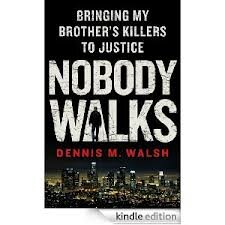 Every once in a great while a true crime is written that pulls at the heartstrings, while it also provides a tale of suspense that will be remembered for a good long time. This is that story.

The complete and utter anguish of a family that loses a son and brother is the subject that this author takes on. Being a criminal defense attorney, Mr. Walsh valiantly tells the story in true ‘Technicolor,’ of his youngest brother’s death and how the family came together, stayed within the law and were able to bring the killers to justice.

It was 2003, when Christopher Walsh was found in a storage locker stuffed into a trash can. As most often happens, the murder investigation slowed down and almost came to a standstill. It took seven long months for the authorities to file charges, and many years to get the case to trial.

When the body was first found, Dennis Walsh announced to one and all that he would keep his brother’s murder alive and not let it become a cold case. And truer words had never been spoken. As the story unfolds, readers see that the Walsh family was close, but unfortunately the father – once a policeman – left the force and got involved with the underworld along with the rest of his sons, except for Dennis. It seems that Dennis was the only son who did not turn to an unsavory path that would make him a criminal. Perhaps that was fate working, considering Dennis took the job of solving his brother’s murder upon his shoulders, and went from suspect to suspect asking questions, becoming one with the jail birds and the people who put them there, without breaking the law.

This is a very heart-wrenching story of a family that made sure justice was served, and readers will find themselves rooting for Dennis from the very beginning.

Filed Under: Books Tagged With: Nobody Walks: Bringing My Brother’s Killers to Justice