Are you ready for some expensive football?

Make that billions. The National Football League on Tuesday awarded Super Bowls to three cities that have invested – or will invest – billions of dollars upgrading or building new stadiums in the

Atlanta’s new $1.4 billion stadium will open in 2017, just two years before the city hosts its third Super Bowl. Miami is spending $500 million to renovate its stadium and will play host in 2020 to its record 11th Super Bowl. And Los Angeles, which just four months ago was granted approval to bring the Rams back to Southern California, will soon begin building a state-of-the-art, $2.6 billion stadium in Inglewood that will be ready for the 2019 season and the 2021 Super Bowl.

The three cities join a growing list of major metropolitan areas that invested big on new stadiums in recent years and were also awarded Super Bowls. Super Bowl 50 was held earlier this year in Santa Clara, California, in the 49ers new stadium, and Minneapolis is set to host the 2018 Super Bowl in a new stadium that will open this year.

New Orleans and Tampa Bay were passed up by NFL owners, who decide where the NFL’s marquee game is played each year.

Atlanta’s Mercedes-Benz Stadium is under construction next door to the Falcons current home, the Georgia Dome. It will feature a retractable roof. Atlanta’s Super Bowl bid of $46 million will be funded with a mix of private and public funds, including $10 million in sales tax relief that was passed by the Georgia Legislature earlier this year, $16 million from the city’s hotel-motel tax, and $20 million from corporate donations.

Atlanta last hosted the Super Bowl in 2000, when a major ice storm impacted the week’s activities. The new stadium will also host the January 2018 national college football championship game and the NCAA Final Four in April 2020.

Miami was awarded Super Bowl 54, which will be played at the conclusion of the NFL’s 100th anniversary season. Fellow NFL owners gave Dolphins owner Stephen Ross the nod based on his pledge to spend a half-billion dollars, and after hearing a pitch from Hall of Fame running back Larry Csonka.

“I want a Super Bowl winner,” Ross told the Miami Herald. “That’s my legacy. That’s what I would love. This is great for the community. I didn’t win anything. The community won. I think that’s what’s important, to bring everybody together. That’s why you own a football team, to bring South Florida together and make them proud. It makes South Florida proud.”

For Los Angeles, Super Bowl 55 will be the first NFL title game held there since 1993, when the Rose Bowl in Pasadena hosted it. Out of football’s biggest event for the past two-and-a-half decades, the LA contingent put together a strong bid for its 8th Super Bowl.

“The Los Angeles region is built to host the Super Bowl,” L.A. Mayor Eric Garcetti and Inglewood Mayor James T. Butts said in a combined statement. “We helped forge this great American tradition at the Coliseum when it began in 1967; and we’re thrilled to bring it back where it belongs for Super Bowl LV.”

Keanu DVD Review by Kam Williams Key & Peele Co-Star as Slumming Geeks in Fish-Out-of-Water Comedy Rell (Jordan Peele) was so inconsolable after being dumped by his girlfriend that getting high didn't help ease the pain. But then, while crying on the shoulder of his cousin Clarence (Keegan-Michael Key), a cute, little kitten appeared on his doorstep. Seeing this as a sign of divine intervention, Rell adopted the adorable stray, … END_OF_DOCUMENT_TOKEN_TO_BE_REPLACED

From #Black Lives Matter to Black Liberation by Keeanga-Yamahtta Taylor Haymarket Books Paperback, $17.95 286 pages ISBN: 978-1-60846-562-0 Book Review by Kam Williams “The eruption of mass protests in the wake of the police murders of Michael Brown in Ferguson, Missouri, and Eric Garner in New York City have challenged the impunity with which officers of the law carry out violence against Black people and punctured the illusion of … END_OF_DOCUMENT_TOKEN_TO_BE_REPLACED

ACRONYM TO FOLLOW by Peter Brav   Finally Our Day has come There’s a Day for everything For doughnuts, siblings, eight track tapes Grilled cheese, daughters and sons to work Encouragement, Alzheimer’s Coffee, math, chewing gum Blasphemy, yo-yos And now finally One for us Truly a Day to celebrate National Don’t Shoot An Unarmed Brother Doctor King Not Seeing Progress George Orwell Laughing It Is So About the … END_OF_DOCUMENT_TOKEN_TO_BE_REPLACED

New Home Sales Jump in April By Burt Carey Sales of new homes hit their highest rate since 2008 in April, according to the Commerce Department’s U.S. Census Bureau. April sales increased 16.6 percent over March figures, which correlates to a seasonally adjusted rate of 619,000 home sales projected for the year. The median price of those new homes was $321,000, the highest median price ever recorded. That’s up 9.7 percent … END_OF_DOCUMENT_TOKEN_TO_BE_REPLACED

Legendary Civil Rights Icon Reflects upon the Past as Prologue

Joan Trumpauer Mulholland The “She Stood for Freedom” Interview with Kam Williams Legendary Civil Rights Icon Reflects upon the Past as Prologue Joan Trumpauer Mulholland was a little girl in the 1950s. When she saw that black people were being treated differently from white people, she promised herself that she would do something to change that. As a teenager, she joined the Civil Rights Movement and protested the injustice she saw … END_OF_DOCUMENT_TOKEN_TO_BE_REPLACED 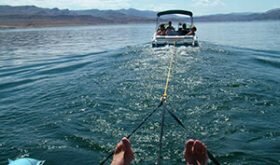 Tow-manship and safety for skiers, wakeboarders

Tow-manship and safety for skiers, wakeboarders by: Craig Lamb You are enjoying a laid-back day of boating away from the stress, drama and trauma of the rat race back on the streets of the big city. Ahead is a boat adrift. Hands wave, and it's obvious the other boat needs help. You can look the other way or go help.   What to do? The right thing to do is be a Good Samaritan. Be a smart boater first. You’ll end the day on a … END_OF_DOCUMENT_TOKEN_TO_BE_REPLACED

Tiger Woods Opts Out of U.S. Open, Quicken Loans By Burt Carey Tiger Woods isn’t ready to stage a comeback just yet. The 14-time major champion sent messages via Twitter and his website Tuesday that he would not be competing at either the U.S. Open at Oakmont next week or the PGA Tour’s Quicken Loans tournament the following week. "While I continue to work hard on getting healthy, I am not physically ready to play in this year's … END_OF_DOCUMENT_TOKEN_TO_BE_REPLACED

Calling All Entrepreneurs: Creating “Buzz” For Your Brands

Calling All Entrepreneurs: Creating “Buzz” For Your Brands by Amy Lignor   This is 2016. This is an election year. “Shark Tank” is a top show on television. And more than ever people want to be entrepreneurs; be in business for themselves and make some money. But even after all this time in the computer-age, entrepreneurs are finding it difficult to see the ‘niches’ they can get into to build their brand so that all consumers know … END_OF_DOCUMENT_TOKEN_TO_BE_REPLACED

Inexpensive Dream Vacations to be Found in “America the Beautiful”

Inexpensive Dream Vacations to be Found in “America the Beautiful” by Amy Lignor Say “dream vacation” and 80% of American’s minds journey to those ritzy areas, like Paris or Athens…they dream of touring the castles of London or dive into the magical history and culture of Ireland. But very few ever get the fact or remember, perhaps, that America the Beautiful is called that for a reason. There are a slew of perfect vacation spots in the … END_OF_DOCUMENT_TOKEN_TO_BE_REPLACED

Transporting Elephants: Will It Be Worth It?

Transporting Elephants: Will It Be Worth It? by Amy Lignor   There are things that conservationists and lovers of animals do in order to protect creatures that most definitely need protection. From the struggle of the wolves in Yellowstone to the White Rhino in Africa, there are humans out there in the world who wish to annihilate a breed without giving a second thought to what that actually means.   Well, now…we have a new … END_OF_DOCUMENT_TOKEN_TO_BE_REPLACED