Models were mistaken as manniquins

It may have gone unnoticed that one of the 25 artists at Artopia in Denver, Colorado this weekend was a bodypainter. I mean there were several artists who were painting mannequins also. So when one of the 3 white mannequins turned out to be a real person a few people were surprised, or freaked out a little that “it moved” or “blinked.”

The actual difference was that a bodypainter was considered a real artist. Often we are seen as shady, or reserved for painting shot girls in night clubs. Most people’s experience is limited to face painting at fairs or children’s parties. In the past few years bodypainting has really gained momentum nationally. First was the X-Men and the blue bodypainted Mystique. Then came Face Off, the first reality competition special effects show which showcased bodypainting as one of the challenges. HBO saw how well people responded and created Naked Vegas two years ago, the first full bodypainting show that several of my friends were on. Then last year I was on Skin Wars, by GSN, the first reality competition bodypainting show, which will be running a second season this year.

Bodypainting is often used in shows locally as entertainment, like adult face and bodypainting, something fun for the kids, but not necessarily seen as “art.” Those of us in the profession have been fighting to change this, by painting our hearts and souls onto the models who love what we do. In the past three years the number of artists has easily tripled. I don’t personally know what it is but most face painters have no problem saying that they are $100 or more an hour for a child’s party. It has been my experience that we bodypainters have had to struggle with asking what we are worth. Fortunately we help elevate and support each other when events try to get us “for free.” The world hasn’t quite figured out what we are to them, and sometimes when we struggle to define ourselves, it really doesn’t help the situation.

There seems to be at least two separate social worlds. One is the bodypainting world, where there are classes and competitions. In this world we know who are big powerhouse names, those who have been on tv, and we watch for teachers on FABAtv.(Face & Body Art) Then there is this other world who has never really seen much bodypainting at all other than in the movies, and face painting at the neighbor’s child birthday party. So when a credible and established Art extravaganza like Westword’s Artopia, bridges those worlds, and calls a bodypainter an “Artist” and not just a bodypainter, it validates not just me but every fellow artist in my profession.

We are artists to begin with! When we become bodypainters, there is a tendency to stop saying we are artists. Most artists say they are artists and then people inquire what kind, sculptor, illustrator, mixed media, AND bodypainter… There is also the follow up question, “so do you also do any real art? I mean like on canvas?” a Human canvas is a real canvas, the photos can be printed like any other art on a giclee print. They can be hung in galleries and look as amazing as any of the subjects that win awards with photography. Only with a normal piece of art you can only get one print, but a living canvas you can not only get hundreds of photos, but video, performance… it’s expressive diversity is endless. Then it is washed off. The digital captures make it timeless.

Bodypainting is an Art. Bodypainters are Artists. This weekend’s Artopia helped to validate that, not only for myself, but for all bodypainters in Denver. That is why you may not have known it was a big deal. A big thank you goes out to Westword and Guerilla Garden for the opportunity and acknowledgement that bodypainters are also artists.

Two-Bit Waltz DVD Review by Kam Williams Clara Mamet’s Impressive Directorial Debut Available on DVD     Maude (Clara Mamet) is a rudderless rebel without a clue, much to the chagrin of her concerned parents, Carl (William H. Macy) and Anita (Rebecca Pidgeon). Not only does the out of control 17 year-old start her day by smoking and drinking first thing in the morning, but she ends up in trouble in English class by … END_OF_DOCUMENT_TOKEN_TO_BE_REPLACED 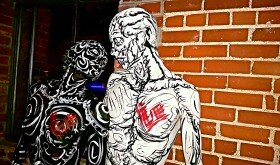 "Why was Bodypainter at Artopia a Big Deal?" It may have gone unnoticed that one of the 25 artists at Artopia in Denver, Colorado this weekend was a bodypainter. I mean there were several artists who were painting mannequins also. So when one of the 3 white mannequins turned out to be a real person a few people were surprised, or freaked out a little that "it moved" or "blinked." The actual difference was that a bodypainter was considered a … END_OF_DOCUMENT_TOKEN_TO_BE_REPLACED

Medina Vista Ranch The Medina Vista Ranch is an exceptional high fenced ranch in Medina County, Texas offers the new owner wildlife management, hunting, other recreational and agricultural opportunities. The ranch has exceptionally beautiful topography and consistent with its location where south Texas meets the hill country, the ranch exhibits a variety of habitats supporting a wide array of wildlife. The ranch has fantastic, nearly … END_OF_DOCUMENT_TOKEN_TO_BE_REPLACED

It’s official the foot in the mouth season has started… 2016 Election season!

It's official the foot in the mouth season has started... 2016 Election season!   I'm Will Roberts, and this is the daily scream, AHHH, here we go!   I don’t know why we are worried about ISIS or any other threat to America. It’s the 2016 election season, and I promise if you give these politicians a few more months, they will be eating their young, rape, pillage and pondering this great country to death.   Now … END_OF_DOCUMENT_TOKEN_TO_BE_REPLACED

Share Your Family’s Special Hunt or Catch with Tactacam

Share Your Family’s Special Hunt or Catch with Tactacam by Ted Lund   Nothing generates interest in the outdoors like building and sharing your memories of a once-in-a-lifetime hunt or fishing trip; its the best way to engage new generations of boys and girls in the sport.There’s also no better way to get that special somebody to put in time in a deer stand, duckblind or on a bassboat than by filming and preserving their … END_OF_DOCUMENT_TOKEN_TO_BE_REPLACED 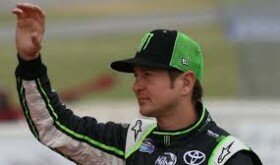 The “Outlaw” Halted in his Track Indefinitely?

The “Outlaw” Halted in his Track Indefinitely?  ~ Amy Lignor Racing has had its troubles lately. But they most likely breathe sighs of relief that the NFL and all its “Gates” seem to grab the headlines so that the world of racing can be buried on the back page of newspapers everywhere. But now that the NFL is “deflated” until next season begins, the Kurt Busch situation has reached the headlines, with more and more sports fans who are … END_OF_DOCUMENT_TOKEN_TO_BE_REPLACED

The Business of Disease Film Review by Kam Williams Alternative Medicine Documentary Extols the Virtues of Holistic Healing     The healthcare industrial complex spends billions of dollars on packaging and branding brainwash us into believing that there are no viable alternatives to Western medicine’s approach to curing this or that illness. In fact, doctors and pharmaceuticals have been so successful in this endeavor … END_OF_DOCUMENT_TOKEN_TO_BE_REPLACED 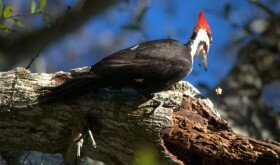 A pileated woodpecker is about 15 inches in length and is one of the largest woodpeckers found in North America. (Only the possibly extinct Ivory-billed Woodpecker in the southeastern United States and Cuba. A pileated woodpecker makes its nest in a tree cavity. The female lays four eggs. Both parents incubate the eggs during the day and the male incubates the eggs at night. The chicks hatch after a little more than two weeks and fledge … END_OF_DOCUMENT_TOKEN_TO_BE_REPLACED 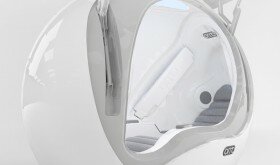 Green Technology Creates Happy Workers ~ Samantha Lewis   Now that the holidays have passed and everyone has bowed their heads and slugged back into work (yes, after the holiday come down “slugged” is the correct word for this particular action), they are met once again with…The Office. At certain times, such as after the holiday enjoyment, the words “The Office” are more apropos to a nightmare rather than a comedy on TV, but … END_OF_DOCUMENT_TOKEN_TO_BE_REPLACED