In early October I started a mid winter garden on the back porch-lanai. We’re located in Florida, about 50 miles south of

Tampa. It’s often cold and can even freeze now and then in November and January, but it’s been rather warmer than that the last two years. Thus, counting on the possibility that two years is actually a trend, I took a chance and decided to put in a small garden in pots in October, but more importantly put in some cherry tomatoes and some Roma tomatoes in Earth Boxes at the same time.

In the second week of October, I bought a set of four spindly looking Roma tomato plants for a few dollars and cleaned up two of the Earth Boxes I had used to cultivate pole beans the previous spring. I hydrated the soil which had dried out over the summer and added some mulch and then covered the mulch with the standard black plastic, fitted covers which come with the Earth Boxes. Into the center of each box I planted two young Roma tomato plants in each box — in each case about 12 inches apart. Once the plants got a good start, that is, about two weeks later, I placed a climbing cage over each plant in each box.

By mid November each of the four plants stood about two feet high. They still were not absorbing much water and, as a result, the bottom feeding water tank of each of the Earth Boxes required refilling only about once every 1-2 weeks. Thus, I felt as 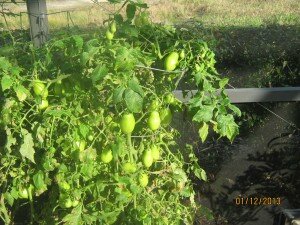 though they could be left in the hands of a friend who could take care of them and water them a few times over the following four-five weeks while we went to Tucson, AZ to visit family.

She watered the tomatoes 2-3 times and also watered the kohlrabi and Chinese cabbage somewhat more often. Everything else I had in the ground out in front of the house was watered by automatic sprinklers. When we returned in mid December the Roma tomato plants were nearly five feet high and filled with tomatoes, all green.  After another month of mostly cool weather (by Florida standards) a few of the hundreds of tomatoes are now ripening.  I expect this will continue for another month, before the spring garden goes in.