You are here: Home / Entertainment / Matchbox Twenty to Perform at the St. Augustine Amphitheatre on March 17th

Matchbox Twenty to Perform at the St. Augustine Amphitheatre on March 17th

Matchbox Twenty will perform at the St. Augustine Amphitheatre on Sunday, March 17th. 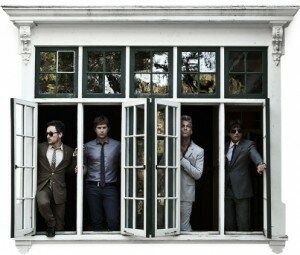 Pre-sale tickets for all dates will be available to members of the matchboxtwenty.com community from tomorrow, November 13th, through Thursday, November 15th.  All remaining tickets will then go on sale to the general public beginning Friday, November 16th.  For full details and ticket availability, please see www.matchboxtwenty.com/events.   Matchbox Twenty will also be teaming up with Tickets-for-Charity for these dates to offer fans access to some of the best seats in the house, while benefiting great causes at the same time. Every ticket purchased through TicketsforCharity.com creates a donation to charities supported by Matchbox Twenty, as well as causes fans themselves can choose to benefit.  For more information on Tickets-for-Charity visit www.ticketsforcharity.com

Matchbox Twenty recently concluded a major Australian tour, thanking their fervent fan following for also catapulting “NORTH” to a #1 chart debut.  The band received rave reviews for their live shows including Sydney’s Music Network which hailed, “…one of the world’s best groups are still having infectious fun and branching out over their long and glorious career.”  The Australian dates followed a pair of sold out London shows including this year’s iTunes Festival 2012.

The 2013 tour celebrates Matchbox Twenty’s blockbuster album, “NORTH,” which exploded into the #1 position on the SoundScan/Billboard 200 after its first week in release earlier this year.  Fueled by critical acclaim – as well as the hit singles, “She’s So Mean” and “Overjoyed” – the album’s unprecedented success marked the band’s first-ever chart-topper and #1 debut.

Matchbox Twenty’s fourth full-length studio recording and first all-new album in a decade, “NORTH” sees the band driving their pop-rock sound further forward, magnifying the indelible melodies, crafty lyricism, and glorious hooks that have defined their multi-platinum body of work.  Matchbox Twenty – Rob Thomas, Paul Doucette, Kyle Cook and Brian Yale – lived together last summer in a house in Nashville where they collaborated on the new material before once again joining forces with the Grammy Award-winning producer Matt Serletic at his Emblem Studios in Calabasas, California.  The result of their labors stands among the band’s finest, with songs like “Put Your Hands Up” and the top 10 sensation, “She’s So Mean,” marked by Matchbox Twenty’s instantly identifiable sonic approach and unadulterated high spirits.

Furthermore, Rob Thomas has proven one of the most highly decorated artists of recent years, receiving three Grammy Awards, 11 BMI Awards, and two Billboard “Songwriter of the Year” honors for both his chart-topping solo work as well as collaborations with such legends as Santana, Mick Jagger, and Willie Nelson.  Thomas’ collaboration with Carlos Santana on “Smooth” was also named the #2 “Most Popular Song Ever” on Billboard’s list of the “100 Most Popular Songs Behind ‘The Twist.’” He was also named to Billboard’s “Top 20 List of Hot 100 Songwriters 2000-2011” at #5, and was the top ranking artist/songwriter on the list.

Tickets will go on sale this Friday, November 16th at 10am at the St. Augustine Amphitheatre and Ponte Vedra Concert Hall box offices.. Tickets also will be available at findmytix.com, all Ticketmaster outlets, at ticketmaster.com, or by phone at 800-745-3000.

Superior. Renowned. Legendary. Each of these words defines Abu Garcia. From its inception on the banks of the Mörrum River in Svängsta, Sweden, Abu Garcia, then AB Urfabriken, has … END_OF_DOCUMENT_TOKEN_TO_BE_REPLACED