You are here: Home / Business / In Sports…Let’s Hear it For the Girls!

In Sports…Let’s Hear it For the Girls!

In Sports…Let’s Hear it For the Girls!

Remember that great song by Whitney Houston? Let’s Hear it For the Boys? Sure you do. We were all closet junkies when it came to watching Footloose. Anyway, the headlines of today‘s sports news got me to thinking about that song once again. And today I wish to address a song that needs to be written ASAP. Yup. Let’s Hear it For the Girls! In fact, the sports world has churned out many superstar female athletes that all of our little girls with dreams can look up to. From soccer greats to the UCONN Huskies college basketball team which, quite frankly, has seen a dynasty form that all college and professional teams in any sport wish they could emulate. Women jockeys are stealing the saddle in horse racing. I’m telling you, give it a while and soon professional baseball WILL see the big picture and put a woman on the mound in a Yankees game.

I know, I know – calm down guys. I realize that baseball and football are the men’s arena – a gift to you from the higher powers, etc. But wouldn’t you be happier if your team won? Well, no offense, but having a super powerful chick on your team might just be the trick!

Right now there is a woman in the news who competes in a sport that, of course, was once all men. Stock car racing was a man’s world. You could head out to drink beer, see the scantily-clad chick throw herself into mud; even a monster truck would be there every once in a while to get the testosterone boiling before the race. Well, this might not have been the scene you saw, but I certainly bore witness to it in the Lone Star State. 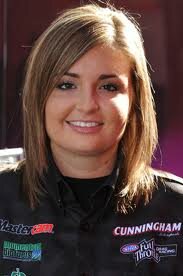 Erica Enders is a name that has been synonymous with winning where the world of revving engines is concerned. And she has now officially become the very first woman driver to win an NHRA Pro Stock Race. In fact, Erica beat Greg Anderson on Sunday – who is the four-time champion – to win the Route 66 NHRA Nationals.

Driving a Cobalt in the 200 mile per hour category, Enders struck over 207MPH, and she is only the sixth female driver in history to ever even compete in the category.

At twenty-eight years of age, Erica got to this final

which is the seventh final round of her career. Being only the twelfth woman in an NHRA pro category race, let’s just say that Erica was beyond thrilled. When she was asked about how it all felt, she replied that it was “awesome” and then she definitely gave a huge shout-out to Anderson which I, personally, loved:

“I think that if I could have planned it, I would have asked to run Greg in the final. You know that he made it very clear that he didn’t want to lose to me. He’s a very competitive guy and I love him to death, but I couldn’t wait to beat him.”

See that? All people in the world who have estrogen floating in their veins simply want to fist-pump in the air with that statement. It feels almost the same as when Buffy used to kick all kinds of male butt – dead or alive – and not even break a nail.

For those who are unaware, Erica is not the only one involved in the ‘pedal to the medal’ power. Her younger sister, Courtney, was actually a junior dragster driver, as well. Erica’s dream certainly came true considering she has become the most successful female pro stock driver in NHRA history.

Before all this happened on Sunday, Erica had actually seen other very special moments in her racing life. Back in 1992, when Erica was only eight-years-old, she began drag racing – and the car, apparently, that brought her thirty-seven career Jr. Dragster wins in her eight years of competition, is on display at the NHRA Motorsports Museum.

Three years later, Erica Enders became the “Jr. Dragster Driver of the Year.” In the year 2000, Erica saw herself become the “NHRA Sportsman Rookie of the Year” when she showed her amazing talent and advanced to her first national event final in Houston. She was only sixteen at the time and became the youngest finalist ever.

2004 was the year she claimed a national victory, becoming only the 35th female in the NHRA to do so. And as the wins mounted up, Erica saw herself become the ‘best of the best’ – going on to break the  national MPH record in Pro Stock with 213.57 miles per hour in 2011.

Enders is so amazing that it was no surprise her life was actually ‘optioned’ by the magical world of Disney and was aired as a Disney Original Movie titled, Right on Track. She is a true hero to all girls out there who were constantly told (and still are, unfortunately, constantly told) that they have no place in the world of racing.

NASCAR has also seen their list of female drivers grow since they first began in 1949. Even though as of today no female can claim a win there are those, such as Danica Patrick, who have earned the pole position. Patrick achieved this in 2012 at DRIVE4COPD 300 in the season-opening race.

You can’t blame NASCAR for not supporting the females, however. They never had a beef with them whatsoever; NASCAR allowed women drivers from the very beginning. It was actually the Indy 500 that discouraged the ‘girl’ element.

Some of the females that have made the ‘record’ books was Janet Guthrie who, in 1976, finished in fifteenth place at the 1976 World 600 (which was a position in FRONT of an Earnhardt, by the way).

Then, in 1986, a woman named Patty Moise became first female to lead in a Busch Series race. Three years later, Shawna Robinson would earn the pole position and then become the first female to win a Touring Series event as well as, “Rookie of the Year” and “Most Popular Driver” awards. Shawna was really the ‘elite’ when it came to female drivers in NASCAR, until Danica Patrick joined in 2010.

In the end, Erica Enders has joined this elite group of female power racers. With her stock car performances and sheer determination and will to win, she is THE ‘girl’ to look up to when it comes to never saying die!

This Moment in Sports is brought to you by: www.befirstinc.com

Superior. Renowned. Legendary. Each of these words defines Abu Garcia. From its inception on the banks of the Mörrum River in Svängsta, Sweden, Abu Garcia, then AB Urfabriken, has … END_OF_DOCUMENT_TOKEN_TO_BE_REPLACED