St. Johns County Fire Rescue (SJCFR) Marine Rescue personnel were recently recognized by the United States Lifesaving Association (USLA) and the Florida Beach Chief’s Association (FBPCA) with the Meritorious Act Award for their efforts in the surf rescue of a beach patron in St. Johns County during the 2013 Summer.  The award recipients were presented the award during the annual USLA and FBPCA Awards program held in Melbourne Beach, FL on March 9th 2014.  Below is a brief description of the incident these personnel were recognized for. 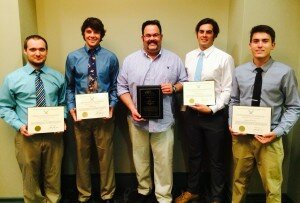 On June 15, 2013, a father and son were enjoying a day at the beach in AnastasiaState Park in St. Augustine Beach.  At some point, the father was overtaken by a wave, slammed into the bottom and did not resurface. The son immediately recognized a problem, held onto his father and signaled the lifeguard for assistance.

St. Johns County Fire Rescue Lifeguard Dylan Droege was manning a tower atAnastasia State Park during this time, saw the son waiving and immediately communicated to Fire Rescue Communications a rescue was in progress. Droege reached the patient in less than 15 seconds, recognized he was unresponsive and began carrying him back to shore. Moments later, Lifeguard Josh Clingerman arrived and assisted in transporting the patient to dry land. Once on the beach, Marine Rescue Zone Supervisor Eric Jones declared he was unresponsive, not breathing and without a pulse. Jones called a cardiac arrest and CPR was initiated including the placement of an AED. Additional personnel arrived and assisted in treatment and packaging, ultimately removing the patient from the beach to rendezvous with St. Augustine Fire Department and St. Johns County Fire Rescue paramedics.  The patient regained a pulse en-route to Flagler Hospital and has since made a full recovery.

As a result of their actions on that day, the USLA and FBPCA awards committee selected these personnel as recipients of the 2013 Meritorious Act Award.

The personnel recognized were as follows: 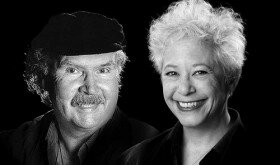 Together At Last: Folk Music Icons Janis Ian & Tom Paxton  to perform at the Ponte Vedra C Concert Hall on Thursday, April 9, 2015  Ponte Vedra Beach, FL- The Ponte Vedra Concert Hall proudly presents Janis Ian & Tom Paxton live on Thursday, April 9, 2015. Tickets go on sale to the public this Friday, August 29 at 10 a.m. Who are the great songwriters in America today? Not the most popular, not the richest. Simply the greats. Ask … END_OF_DOCUMENT_TOKEN_TO_BE_REPLACED

Thoughts from a Unicorn: 100% black. 100% jewish. 0% safe. by MaNishtana Foreword by Saul Sudin Hyphen Publishing Paperback, $19.95 392 pages, Illustrated ISBN: 978-0-61574758-3 Book Review by Kam Williams “Born to an African-American Orthodox Jewish family, MaNisshtana has spent his life being Black, being Jewish, fielding questions and accusations from all sides, and occasionally just Being. Through this witty, straight-talking … END_OF_DOCUMENT_TOKEN_TO_BE_REPLACED

Recently I have been thrust into the limelight as a contestant on Skin Wars, a body painting competition series on GSN (Game Show Network) which aired it's first episode last week, August 6th and runs for 8 weeks. I went to Las Vegas for a body painting convention this past weekend for the Bodypainting Jamtacular hosted by Suzanne Luganno of SyFy's Naked Vegas. I was recognized for being on the show first by the doorman at our hotel. Then it … END_OF_DOCUMENT_TOKEN_TO_BE_REPLACED

When owning property, there’s a list of information, rules, regulations, and rights the landowner needs to know in order to make sure that their property meets their objectives, whether it be a recreational or commercial investment. And for some, when it comes to managing resources and receiving the best benefits available, use of a tool referred to as a ‘conservation easement’ is one path to take.   By putting a … END_OF_DOCUMENT_TOKEN_TO_BE_REPLACED

Bill T. Jones The “Story/Time” Interview with Kam Williams Tiny Dancer, Dancing in the Sand Williams Tass Jones is an accomplished artist, choreographer, dancer, theater director and writer. The world-renowned Renaissance man was born in Bunnell, Florida on February 15, 1952, but raised in upstate New York from an early age. Bill began his dance training at the State University at Binghamton, where he studied classical ballet and modern … END_OF_DOCUMENT_TOKEN_TO_BE_REPLACED

*ATTENTION ANGLERS*   This is going to be a FANTASTIC weekend of fishing!The clear waters, the hungry biters – NOW is the time for anglers everywhere to enjoy life!   So…why not enjoy another added extra from your favorite boat ‘creator’?   Yes…It’s a CONTEST!   Whether you’re headed to that secret fishing hole, or casting offshore – TIDEWATER BOATS wants to see your success!!!   Head to … END_OF_DOCUMENT_TOKEN_TO_BE_REPLACED

The Tale of Two Commissioners ~Amy Lignor When it comes to the ‘bug guns’ in the world of sports, there are two men that make the headlines for many things – right and wrong decisions, as far as the public is concerned. Goodell is the heavyweight in the NFL. This is a man who always seems to be facing controversy – especially with players in the NFL getting into trouble…trouble that causes them to earn everything from suspensions to financial … END_OF_DOCUMENT_TOKEN_TO_BE_REPLACED

Recently I was invited by a friend of mine who is a photographer for the oil and gas industry to go on a tour of a Colorado local energy company, Noble Energy. I went because I am the idiot who likes to hear both sides of a story. I'd also prefer to know something first hand than hearsay. So I went to learn about Fracking. I went on this tour with the same basic knowledge that most of the people I know have about Fracking. 1. Fracking is … END_OF_DOCUMENT_TOKEN_TO_BE_REPLACED

Exploring the Architecture of Mesa Verde National Park   Not only is it a National Park, but Mesa Verde is also a well-protected UNESCO World Heritage Site, being the largest and most amazing archaeological preserve in all of the U.S..   It was President Theodore Roosevelt who, in 1903, called for protection of the area and created the Park. With some of the most well-preserved cliff dwellings in the world, our … END_OF_DOCUMENT_TOKEN_TO_BE_REPLACED

Captive is Captive No Matter How You Look at It ~ Samantha Lewis When it comes to the saving of a species – whether that be plantlife or wildlife – obstacles arise around every corner. For every no-kill shelter opened, five more dolphins seem to die in a net somewhere. For every person who helps in the courts bring down the ‘bad guys’ who kill the Black Rhino for a horn, or the Great White for some ridiculous million-dollar soup, there seems to … END_OF_DOCUMENT_TOKEN_TO_BE_REPLACED