Why is the price of gasoline in the Untied States so artificially high? Much of the explanation lies in a corporate conspiracy to deny us access to alternative fuel sources. A few years ago, the documentary “Who Killed the Electric Car?” illustrated how the auto industry had

Now, this eye-opening expose’ shows how big oil has conspired to deny Americans fuel choice for the past century. This state of affairs has persisted in the face of a Supreme Court decision which forced John D. Rockefeller to break up the Standard Oil Company by declaring it a monopoly way back in 1911.

What alternative fuels might a car run on? Well, besides electricity, there’s solar power, methanol, ethanol and hydrogen, to name a few. Who knows what other new ideas might have been encouraged if Congress hadn’t discouraged development of competing energy options by granting the gas-guzzling car manufacturers a stranglehold on research and development via tax breaks and other measures.

This wholesale sellout of the American public is the subject of Pump, an eye-opening expose’ co-directed by Joshua and Rebecca Harrell

Tickell. It is the husband-and-wife team’s sobering thesis that, “We have to come to grips with the fact that this is the end of the Oil Age.”

What more proof do you need than the sight of the devastation visited upon Detroit, a latter-day ghost town where, “the hope of the average person for a better life has disappeared” in the wake of its being abandoned by the car conglomerates for greener pastures? And the Motor City might just be the tip of the iceberg, if you believe the dire warnings issued intermittently during this powerful documentary by John Hofmeister, the former President of Shell Oil.

Today, as founder of Citizens for Affordable Energy, he indicts an unnecessary addiction to oil as the root cause of everything from political instability and war to climate change and environmental crises. His organization’s aim? A simple one, merely to make fuel choice a viable reality.

Food for thought the next time you cavalierly instruct the gas station attendant to “Fill ‘er up!”

Picture Flagler at the Florida Heritage Book Festival     St. Johns County, FL – As part of the 7th Annual Florida Heritage Book Festival, the St. Johns County Bookmobile is visiting the campus of Flagler College. The Bookmobile will be available from 9 a.m. to 4 p.m. on Saturday, September 27, between the Flagler College Library and the Crisp-Ellert Museum. It will offer fun for kids of all ages. Funds raised by the Florida … END_OF_DOCUMENT_TOKEN_TO_BE_REPLACED

Recently I made a discovery that the reason it feels that I have been swimming against the current all by myself trying to figure out what’s wrong is because I am in a vast sea of people who are all around me thinking the same thing. Haven’t you felt it too? Some strange inertia holding you back from that next realization that will give you the breakthrough financially? in your relationship, in your self worth and value? in meaningful work? … END_OF_DOCUMENT_TOKEN_TO_BE_REPLACED

Land to Table: California Grass-Fed & Grass-Finished Beef   The Piedra Blanca Rancho lords over the Pacific roughly halfway between San Francisco and Los Angeles. Grassland, native oaks, and chaparral cover its gentle slopes. Coastal prairie extends from the foothills to the cliffs above San Simeon Bay. Rainfall runs up to 20 inches at sea level, and as much as 40 inches at higher elevations. Streams flow year-round … END_OF_DOCUMENT_TOKEN_TO_BE_REPLACED

Pump Film Review by Kam Williams Eye-Opening Expose’ Explores America’s Addiction to Oil     Why is the price of gasoline in the Untied States so artificially high? Much of the explanation lies in a corporate conspiracy to deny us access to alternative fuel sources. A few years ago, the documentary “Who Killed the Electric Car?” illustrated how the auto industry had successfully lobbied politicians to discourage its … END_OF_DOCUMENT_TOKEN_TO_BE_REPLACED 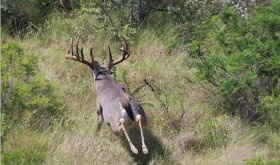 Looking Forward to the Texas Hunt   Hunters everywhere are rubbing their hands together with excitement when it comes to the dove hunting season; but it is the hunters in Texas who are even more excited, considering the already ‘good’ white-winged dove populations have shown an increase in numbers over last year.   Labor Day is when it all began, and the extremely high number of doves for 2013, according to … END_OF_DOCUMENT_TOKEN_TO_BE_REPLACED

The Bills Head to the Super Bowl!  ~ Amy Lignor Yes, this is a real headline. I know you may not remember, but the Bills ‘headed’ there many a time, guys and gals. This is the team (the ONLY team) to win four consecutive AFC conference championships. This is the part of the story that’s forgotten, because – like that guy from ‘Mad Men’ – they are also the only ones to lose four consecutive Super Bowls. However, you can’t lose if you don’t go. … END_OF_DOCUMENT_TOKEN_TO_BE_REPLACED

Recently I was invited by a friend of mine who is a photographer for the oil and gas industry to go on a tour of a Colorado local energy company, Noble Energy. I went because I am the idiot who likes to hear both sides of a story. I'd also prefer to know something first hand than hearsay. So I went to learn about Fracking. I went on this tour with the same basic knowledge that most of the people I know have about Fracking. 1. Fracking is … END_OF_DOCUMENT_TOKEN_TO_BE_REPLACED

The Mystery & Myths of the Badlands   Badlands National Park is not only one of the most amazing scenic spots in the world, but it is also one of the most eccentric. That area is a type of other-worldly experience, as if the land holds mysteries and myths hidden deep within the buttes. The high rock formations seem to dare and challenge you to reach the top; perhaps climb as far and fast as you can in order to meet the … END_OF_DOCUMENT_TOKEN_TO_BE_REPLACED

‘Love Thy Neighbor’ will be Tested ~ Samantha Lewis According to reports collected, it was between 1820 and 1830 that the United States passed over the 10,000,000 point in human population. Makes you want to get out those colonial woodworking tools and candlelit lanterns, doesn’t it? And that was just the U.S.; the rest of the world is not included in these figures.   When it comes to the ‘increasing’ of human population as it … END_OF_DOCUMENT_TOKEN_TO_BE_REPLACED