Embrace the Vegan In You!

Embrace the Vegan In You!

When speaking about the numerous ways humans can create a better earth by recycling; utilizing companies that create products, services and systems that save the environment; getting everyone from celebrities to entire countries to jump on the bandwagon and promote new gardens, wastewater management, etc., there is also a far more personal way to save the planet AND become healthier all at the same time.

As we all know, the issue of a healthy America is at the forefront of everyone’s mind, including politicians. Even corporations are now making employees get fit in order to receive discounts on their health insurance. Well, becoming a vegetarian has been around for a good, long time and it is still one of the most effective actions any person can take in order to relieve the pressure that has been placed on our planet’s resources.

Easing pollution, getting better control on global warming, saving creatures from extinction – all of this can be accomplished by changing our diets.

The way animals are bred for food is a true threat to the planet and it does cause a great deal of pollution, because to accomplish the breeding, extremely large quantities of water, petroleum, pesticides even drugs are used.

Even with the constant innovations in technology, if we really want to fix our issues, the simplest answer is still the right one: The best way to reduce the human impact on our environment is to eat less meat.

There are farming systems that literally end up devastating everything from forests to oceans, and even air, depending on the use of oil – and these systems are actually a facet that is responsible for climate change.

Groups of scientists all the way to the United Nations have done studies and research that state “human and ecological problems go hand in hand.” And we still have the issue of not having enough healthy meals to provide to over one billion mouths around the globe.

Let’s take a look at very specific issues when it comes to eating meat:

By eating approximately 230 thousand tons of animals a year, overheating the planet has become a huge issue. When breeding mostly chickens, cows, sheep and pigs, we end up emitting methane and other greenhouse gases. As with any issue, 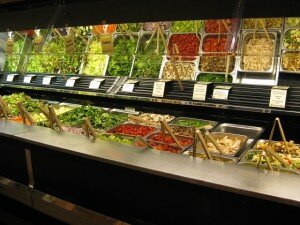 this is hotly debated by each side. It was back in 2006 that the UN calculated the combined climate change emissions of animals bred for their meat, were about 18% of the global total which was more than cars, planes, and trains combined. Oil is burned when taking animal carcasses to markets, electricity is used when keeping meat cool, gases and energy are used to harvest the crops that the animals eat – and the list goes on.

Now we come to the actual ruining of land. Our human population is expected to expand from one to three billion people; developing countries are expected to eat more meat, and global consumption of meat is on track to double in the next forty years. Available land is, quite simply, not going to be available anymore. Approximately 30% of the available area right now is used by livestock, or for growing food for those animals. Whereas a farm system for cattle and other livestock takes a great deal of land, a garden or ‘vegetarian’ world would take less than half that. There would be no gasses or emissions from the plantlife and a ‘green’ diet would enhance the soil and bring back natural habitats that have disappeared over the last decade.

Another tragic thought? If the grain fed to animals in western countries was consumed directly by people instead of using it to raise animal meat, the globe could feed at least twice as many people as it does right now, which means saving the lives of millions of hungry souls. Land has been overstocked, soil has eroded and flooding has commenced because of overgrazing.

Now…are there benefits? Yes, actually there are. Whether the other side wishes to cede this fact or not, animal manure actually revitalizes soil and there are millions of animals that are raised on what scientists refer to as marginal land; land that is completely unsuitable for vegetation or crops in the first place.

Deforestation is a problem that we are just starting to find solutions for. For thirty years agribusiness across the globe actually destroyed tropical rainforests. But it wasn’t for the trees, like you would first believe; it was actually for the land so that cattle could graze.  Millions of hectares of trees have also been taken down to provide hamburgers for the United States, believe it or not, and even more devastation was happening on a regular basis three decades ago. Forests and land masses were wiped out that can never be replaced.

When you speak about polluting the air, ask anyone who has ever lived near a factory farm and they will tell you about the extreme scents that they receive. Greenhouse gases, such as methane and carbon dioxide, as well as other gases that the cows and pigs produce, create air that is simply not breathable. Manmade ammonia is a major contributor to acid rain and is also generated by livestock. In addition, concentrated factory farming of animals is a huge contributor to ozone pollution.

All of these issues bring humans illnesses that are getting worse and worse all the time. In a globe that is striving to be healthy and to get fit, obesity, cancers, heart diseases – all of these illnesses can come from a meat diet.

Therefore, before thinking about ordering that piece of steak, take a look at the salad bar. You will not believe the excellent food that’s just waiting there for you!

Ok. I know this may be hard to believe but some of you didn’t know that I was a contestant on the GSN (Game Show Network) new bodypainting reality contest show, Skin Wars. Produced by Michael Levitt and Jill Goularte. Hosted by Rebecca Romijn. Judges were RuPaul, Craig Tracy (my personal hero) and Robin Slonina of Skin City. It is still currently airing Wednesday nights 9pm eastern/8 central on GSN. If you want to find the channel in your area go … END_OF_DOCUMENT_TOKEN_TO_BE_REPLACED

Thoughts from a Unicorn: 100% black. 100% jewish. 0% safe. by MaNishtana Foreword by Saul Sudin Hyphen Publishing Paperback, $19.95 392 pages, Illustrated ISBN: 978-0-61574758-3 Book Review by Kam Williams “Born to an African-American Orthodox Jewish family, MaNisshtana has spent his life being Black, being Jewish, fielding questions and accusations from all sides, and occasionally just Being. Through this witty, straight-talking … END_OF_DOCUMENT_TOKEN_TO_BE_REPLACED

Ok. I know this may be hard to believe but some of you didn’t know that I was a contestant on the GSN (Game Show Network) new bodypainting reality contest show, Skin Wars. Produced by Michael Levitt and Jill Goularte. Hosted by Rebecca Romijn. Judges were RuPaul, Craig Tracy (my personal hero) and Robin Slonina of Skin City. It is still currently airing Wednesday nights 9pm eastern/8 central on GSN. If you want to find the channel in your area go … END_OF_DOCUMENT_TOKEN_TO_BE_REPLACED

When owning property, there’s a list of information, rules, regulations, and rights the landowner needs to know in order to make sure that their property meets their objectives, whether it be a recreational or commercial investment. And for some, when it comes to managing resources and receiving the best benefits available, use of a tool referred to as a ‘conservation easement’ is one path to take.   By putting a … END_OF_DOCUMENT_TOKEN_TO_BE_REPLACED

Bill T. Jones The “Story/Time” Interview with Kam Williams Tiny Dancer, Dancing in the Sand Williams Tass Jones is an accomplished artist, choreographer, dancer, theater director and writer. The world-renowned Renaissance man was born in Bunnell, Florida on February 15, 1952, but raised in upstate New York from an early age. Bill began his dance training at the State University at Binghamton, where he studied classical ballet and modern … END_OF_DOCUMENT_TOKEN_TO_BE_REPLACED

*ATTENTION ANGLERS*   This is going to be a FANTASTIC weekend of fishing!The clear waters, the hungry biters – NOW is the time for anglers everywhere to enjoy life!   So…why not enjoy another added extra from your favorite boat ‘creator’?   Yes…It’s a CONTEST!   Whether you’re headed to that secret fishing hole, or casting offshore – TIDEWATER BOATS wants to see your success!!!   Head to … END_OF_DOCUMENT_TOKEN_TO_BE_REPLACED

The Tale of Two Commissioners ~Amy Lignor When it comes to the ‘bug guns’ in the world of sports, there are two men that make the headlines for many things – right and wrong decisions, as far as the public is concerned. Goodell is the heavyweight in the NFL. This is a man who always seems to be facing controversy – especially with players in the NFL getting into trouble…trouble that causes them to earn everything from suspensions to financial … END_OF_DOCUMENT_TOKEN_TO_BE_REPLACED

Recently I was invited by a friend of mine who is a photographer for the oil and gas industry to go on a tour of a Colorado local energy company, Noble Energy. I went because I am the idiot who likes to hear both sides of a story. I'd also prefer to know something first hand than hearsay. So I went to learn about Fracking. I went on this tour with the same basic knowledge that most of the people I know have about Fracking. 1. Fracking is … END_OF_DOCUMENT_TOKEN_TO_BE_REPLACED

Exploring the Architecture of Mesa Verde National Park   Not only is it a National Park, but Mesa Verde is also a well-protected UNESCO World Heritage Site, being the largest and most amazing archaeological preserve in all of the U.S..   It was President Theodore Roosevelt who, in 1903, called for protection of the area and created the Park. With some of the most well-preserved cliff dwellings in the world, our … END_OF_DOCUMENT_TOKEN_TO_BE_REPLACED

Captive is Captive No Matter How You Look at It ~ Samantha Lewis When it comes to the saving of a species – whether that be plantlife or wildlife – obstacles arise around every corner. For every no-kill shelter opened, five more dolphins seem to die in a net somewhere. For every person who helps in the courts bring down the ‘bad guys’ who kill the Black Rhino for a horn, or the Great White for some ridiculous million-dollar soup, there seems to … END_OF_DOCUMENT_TOKEN_TO_BE_REPLACED