Though nearly empty Thursday afternoon, mission control at NASA’s Jet Propulsion Laboratorywill be packed with more than 100 people when the Mars rover Curiosity is 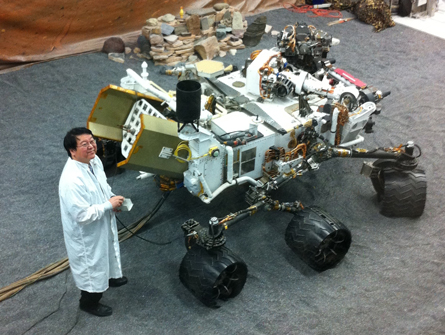 set to touch down this Sunday, August 5.

But for now, the control room is quiet, illuminated by a dim, soothing blue light. Data and images flash across the enormous screens hanging at the front of the room, which also serves as the nerve center for the Deep Space Network, an array of telescopes tasked with tracking the spacecrafts JPL sends zooming around the solar system.

One of the displays tells the team which of these 24 spacecraft are currently phoning home and where on Earth the call is received. At this moment, the Mars Reconnaissance Orbiter is talking to a telescope near Madrid. The Dawn spacecraft, in orbit around the asteroid Vesta, is listening as an antenna in Canberra, Australia, relays instructions. And Juno, on the way to Jupiter, is phoning in to Goldstone, Calif. “There’s a minimum of five engineers here at all times,” says Jim McClure, the facility’s operations manager. “They’re monitoring the data flow from the spacecraft.”

The mission control room at JPL in Pasadena, Calif., will be buzzing on the night of August 5, when the NASA rover Curiosity is set to touch down on Mars. Before the big day, the room’s screens relay information about the status of JPL’s 24 interplanetary spacecraft.N. Drake

Staffed 24 hours a day since 1964, the Space Flight Operations Facility — which houses mission control — is now a U.S. historical landmark.

In the next room over is the cruise mission support area, a space lined with rows of computers set in front of a large American flag. Here, engineers are responsible for shooting the Mars Science Laboratory spacecraft toward Gale Crater like a well-aimed, cone-shaped meteorite. “We actually picked it up just a few minutes after it launched from Florida, and have been controlling it from here ever since,” says flight director David Oh.

An hour before landing on Sunday evening, a can of peanuts will be popped open and passed around the room — scientists too, it seems, are superstitious and adhere to decades-old rituals. “It’s always been a lucky charm for us,” Oh says. “I think missions have always seemed to work out better when we had the peanuts there.”

In another building on the JPL campus, a mock Curiosity rover is trundling around atop a seeming paradox: clean dirt, a grayish substance that serves as a stand-in for Mars’ red sands. “It’s actually crystals. Small, crushed crystals,” says Eric Aguilar, systems integration and tech manager for the Mars Science Laboratory. “It doesn’t cause as much dust.”

Here, in the In-Situ Instrument Laboratory, scientists test drive landing strategies and practice rover maneuvers. Years ago, the airbags that cushioned the Mars Exploration Rovers Spirit and Opportunity once filled the room to its ceiling. And later, when Spirit found herself stuck on a rock, scientists rolled out her Earthly twin and began sorting out how to free the rover from hundreds of millions of kilometers away.

Now, the team is getting ready for Curiosity’s surface operations — under the watchful eye of a rubber chicken perched atop a pile of rocks. The chicken moved in while the team was testing the Mars Descent Imager, a camera mounted on the rover’s belly. “We needed something to take an image of,” Aguilar explains. “We like to surprise the operations team as they get the data down and take a look.”

Superior. Renowned. Legendary. Each of these words defines Abu Garcia. From its inception on the banks of the Mörrum River in Svängsta, Sweden, Abu Garcia, then AB Urfabriken, has … END_OF_DOCUMENT_TOKEN_TO_BE_REPLACED