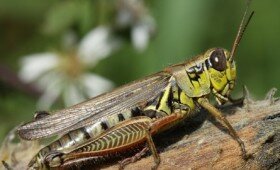 A Terrified Insect Can Haunt Their Homeland After Death

Terrified insects can haunt their homeland after they die. Chemical remnants of fear in the rotting corpses of grasshoppers slow the decomposition of dead grass and other debris important for fertilizing new plant growth, a new study finds. Spiders that frighten grasshoppers may thus play an unrecognized role in shaping ecosystems, adding a menacing presence [...]

Is it the Bestseller Fifty Shades of Grey?

Is it the Bestseller Fifty Shades of Grey? Or, Are the  Sexual Habits of Penguins Really Just THAT Interesting?   In an ‘off the topic’ announcement, there is a previously unreleased study that details the lewd and more than slightly lascivious sexual behaviors of penguins that has been released to the world. (No, I’m not [...]

The CEO of one of the world’s most popular social networks has apparently joined a high-end, consumer-focused image-sharing website and rival to Pinterest, and this seemingly innocent news has led to some speculation that his involvement may run deeper than just being another user of the service. The webpage in question, The Fancy, describes itself as “part [...]

The Materials Of What Shrimp Are Made Of Help Engineers

Engineers at the University of California, Riverside are looking to nature for inspiration in creating stronger vehicle frames and body armor. They may have found a key structure in the club-like claw of the sea floor-dwelling mantis shrimp, according to a report published online this week in the journal Science. The 4-inch crustacean, also known as a stomatopod, [...]

What’s In The Applesauce?

WWDC is right around the corner — should the weekend be a corner to be rounded — and the internet is abuzz with excitement. For those of us unable to make the pilgrimage to the beautiful Bay area, following along on the various tech-themed blogs and news sources will simply have to suffice. Seeing as this [...]

‘One-Size-Fits-All’ The Cloud Are They Serious

There are several different cloud types such as cumulus, stratus, cirrus and altostratus; and so too there should be different shapes and flavors of cloud computing. That’s the findings of a report, “Negotiating Cloud Contracts – Looking at Clouds from Both Sides,”  released by researchers of the Cloud Legal Project at the Centre for Commercial Law Studies [...]

Do Not Track Measures By Microsoft Are In Hot Water

It was really sweet of Microsoft to want to protect us from online ad agencies and any other organizations who may wish to watch our online activities and behaviors. After all, online privacy and security is a hot-button topic right now. Surely the Redmond-based company wanted to get ahead in this arena and be forever known as [...]

Mysteries Of Space Are Being Tackled By New Supercomputer

The University of Leicester has been awarded funding to establish a multi-million pound national supercomputer which will make it possible to study space in unprecedented detail and provide new insights into the history of the Universe. It will allow astronomers to address some of the most challenging problems in physics and astronomy – such as What is [...]

Facebook’s new App Center is now up and running on a number of iPhones, which the social network says are being used as a trial for its store. “Since we announced the App Center to developers last month, we’ve been testing it with a small percentage of users. We have no further details to share at this [...]

Will Our Mobile Internet Will Only Get Faster From Here!