You are here: Home / Entertainment / Big Time Rush to Offer Fans the Hottest Ticket of the Summer with their National “Summer Break Tour” Tickets on Sale April 6th 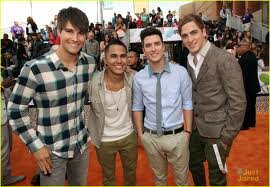 Big Time Rush will stop at the St. Augustine Amphitheatre on Saturday, July 6. Olivia Somerlyn will be support for this tour.  Tickets for the tour go on sale to the public April 6th at LiveNation.com, Ticketmaster.com or by calling 1-800-745-3000.  For more information on the tour, please visit www.SummerBreakTour.com.

Big Time Rush has taken their on camera careers to the stage with the help of the global partnership between Columbia Records and Nickelodeon. Big Time Rush is currently recording their highly anticipated third album set to release in early Summer 2013. The release will feature brand new music that will debut on the upcoming season of the TV series, “Big Time Rush,” which averages 3.6 million total viewers. Big Time Rush was the most watched live-action series premiere in Nickelodeon’s history, with 6.8 million viewers. Elevate, Big Time Rush’s second album released by Columbia Records/Nickelodeon, was the follow-up to the group’s blockbuster debut, 2010’s gold-certified BTR. The band’s 2012 summer anthem single “Windows Down,” has garnered over 15 million video views and quickly climbed the radio charts becoming their third consecutive charting single at Pop radio. To date, Big Time Rush has sold close to 4 million singles.

Tickets priced at $65.00, $45.00, and $29.00 will go on sale to the general public this Saturday, April 6th at 10am at the St. Augustine Amphitheatre and Ponte Vedra Concert Hall box offices. Tickets also will be available at findmytix.com, all Ticketmaster outlets, at ticketmaster.com, or by phone at 800-745-3000.

Superior. Renowned. Legendary. Each of these words defines Abu Garcia. From its inception on the banks of the Mörrum River in Svängsta, Sweden, Abu Garcia, then AB Urfabriken, has … END_OF_DOCUMENT_TOKEN_TO_BE_REPLACED