For those who love history, or just extremely good movies, you have already set your eyes on the Skyrian horse. Sometimes referred to as the Skyros pony, these semi-wild creatures are legendary. Since well before what many believe to be the beginning of creation, this elite horse was responsible for carrying Man into battle – from simple men to the gods, themselves. In fact, the Skyrian horse was supposedly responsible for pulling Achilles’ own incredible chariot. Seeing their plight in 2016, however, it would be safe to say that all the gods on their mount want nothing more than to send thunder and lightning down on us mortals for the simple fact that the stunning horse is on the verge of becoming extinct. 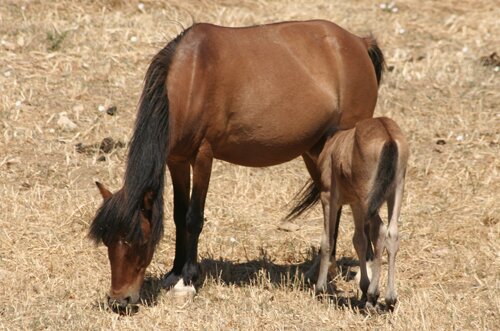 These creatures have lived on the Greek island of Skyros for two thousand years, and now one organization – the Skyros Island Horse Trust – has made it their mission to save this extremely rare animal. From the overgrazing of sheep to interbreeding with donkeys to the one problem that is plaguing all species around the world – disappearing habitats – there are only 200 Skyrian horses left on Earth.

The Skyros Island Horse Trust is trying to not only save but also bring back the species ten-fold. Through welfare, conservation and education initiatives, this nonprofit is striving to make sure that one of the few creatures carved on ancient friezes, do not perish.

As with all of the creatures sitting on the Endangered Species list, the Skyrian horse needs to have their quality of life improved. And the Trust is also working overtime to create the widest genetic pool of the equines on the island while staying true to the Skyrian type. The Skyros pony has an extremely friendly demeanor, making them perfect for equine-assisted therapy as well as teaching children how to horseback ride, yet another “hobby/sport” that has declined.

A compelling animal, the Skyros pony is thought to be featured on the actual Parthenon in Athens, as well, which makes them very much a living, breathing facet of history. To see them go extinct would be a horror.

When speaking with scientists, it is stated that the Skyros pony descends from equines brought to Greece as far back as the fifth century B.C. Once the isles were filled with them, yet the animals grew smaller in number as well as in size, evolving to island life. Solid in color, the Skyrian horse has a thick, plush mane. Standing 3.5 feet at the shoulder, they are classified as a pony because of their stature, yet have similar proportions to full-size horses with small, strong hooves.

It is more than time to turn our gazes toward these loving animals and try to find a way to all come together in order to bring back conservation in Mediterranean countries, which is difficult because of all the daily problems they are facing. With the country of Greece stuck in a very difficult economic situation at the moment, the Skyrian horse is even worse off than other animals’ trying to be saved globally. Even though this particular horse has status and is a truly rare breed, Greece has no government resources or funding to help save them.

In the end, the people are the ones that must stand up and fight for the animal’s survival. Even though in politicians’ eyes the complete extinction of the Skyros pony falls far down on their list of things that must be done, sitting back and doing nothing will most definitely lead to another Greek tragedy. One that is most definitely not fiction, and one we can definitely stop from happening.