The multi-billion dollar daily fantasy sports industry has come under scrutiny this week following a release of information on teams built from National Football League players before their week 3 games began.

The New York Times broke the story Monday after a user on an online fantasy forum site recognized that an employee of the daily fantasy sports company DraftKings released data on player ownership for its Millionaire Maker contest before those NFL games started. The employee, identified as Ethan Haskell, won $350,000 that same week playing on FanDuel, a rival daily fantasy sports company.

Officials from both companies released a joint statement saying the data release was inadvertent, and declaring that the integrity of their games is intact. The companies, while acknowledging that their employees play at rival sites, claim to have protocols in place to detect employee misuse and that none has been detected. On Tuesday DraftKings pulled its advertising from ESPN.

The incident underlined the possibility that these high-dollar fantasy game stakes could be rigged.

New Jersey Congressman Frank Pallone (D-3rd District) has called for a congressional review of the industry for its exemption from gambling laws. “It’s clear now, with million dollar jackpots and the advertising that goes on, that this is straight-out gambling,” Pallone said.

It is certainly big money. The Fair Trade Sports Association estimates there are 42 million players in the United States and Canada. On average, they spend about $465 per year. FanDuel and DraftKings reportedly spent $100 million on advertising in September alone, attempting to capitalize on the new NFL season and bolster the number of people playing their games.

With Dallas Cowboys owner Jerry Jones and New England Patriots owner Robert K. Kraft as investors, DraftKings has signed a three-year deal with the NFL as a partner of its International Series in Britain. Sports gambling is legal in the UK. FOX Sports has invested hundreds of millions of dollars in DraftKings. FanDuel investors include Comcast and KKR.

Fantasy sports players act as owners who build a team of players in a given sport. They accumulate points based on each player’s statistics. Traditional fantasy sports leagues stretched over a sport’s entire season. That’s where daily fantasy sports differs. Players at DraftKings and FanDuel pay an entry fee to build a team of professional athletes for a particular day or week. Entry fees range from 25 cents to $1,000. Those who accumulate the most points win money from that day’s entries.

Here’s the rub: Employees at DraftKings and FanDuel have access to data that tells them which professional players have garnered the most bets, allowing them an advantage for making tactical decisions before making their own bets. Haskell’s winnings during week 3 of the NFL season raise the question about who has access to such valuable data when millions of dollars are at stake.

A fantasy player’s odds of winning are low – way low. Research released in July by Sports Business Daily showed that over a three-month period 91 percent of profits collected by players at DraftKings and FanDuel were won by just 1.3 percent of the players. FanDuel claims to have paid out more than $2 billion in winnings; about $6 million of that went to DraftKings employees. 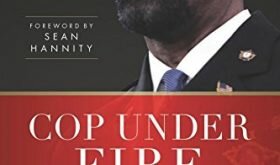 Cop under Fire Moving Beyond Hashtags of Race, Crime and Politics for a Better America by Sheriff David Clarke, Jr. with Nancy French Foreword by Sean Hannity Worthy Publishing Hardcover, $21.99 272 pages ISBN: 978-1-617-95857-1 Book Review by Kam Williams “David Clarke refuses to bow a knee to political correctness, and he refuses to give his party over to the hands of black activists whose politics would destroy America. … END_OF_DOCUMENT_TOKEN_TO_BE_REPLACED

The Day After the Day Of by Paul Ilechko   The sky sheds its tears. This morning is the morning of the day after. The day of mourning, the day after the day of.  I beseech the sky to shed tears in order to wash away the tears on my face.   This is the first day of the time after. This is the beginning of a new time, the days of pain, the days of sorrow. We are in mourning. The sky looks down and sheds its tears for … END_OF_DOCUMENT_TOKEN_TO_BE_REPLACED

History Being Sold to the Highest Bidder by Amy Lignor   For the longest time, scientists and archaeologists have been confused and bemused by various discoveries they’ve unearthed that offer little or no explanation as to the who, what, and why of the people who created these things or left them behind. Even now, in 2017, there are discoveries being studied; stories that were once legends now have actual bits of proof being found that … END_OF_DOCUMENT_TOKEN_TO_BE_REPLACED

Amandla Stenberg The “Everything, Everything” Interview with Kam Williams Stunning Stenberg! Amandla Stenberg first gained recognition for her role as Rue in The Hunger Games, alongside Jennifer Lawrence, Liam Hemsworth and Josh Hutcherson. After the success of that film, Amandla earned the 2012 Teen Choice Award with Jennifer for Best Film Chemistry. She was also nominated for NAACP Image and Black Reel Awards for that … END_OF_DOCUMENT_TOKEN_TO_BE_REPLACED 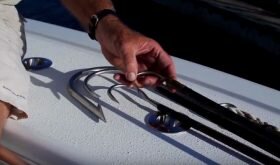 Get the Right Gaff!

Get the Right Gaff! By Capt. Gus Cane Nets work well for handling smaller inshore species, but for big, powerful adversaries gaffs are the preferred tool for landing fish. There are several sizes, lengths and even styles of gaffs though, so getting the right one is important. Gaffs handles are usually made of aluminum or fiberglass. The hook end of the shaft is often tapered for less resistance in the water. The butt end is thicker … END_OF_DOCUMENT_TOKEN_TO_BE_REPLACED 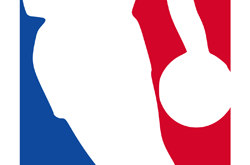 Would Curry Versus James be the Ultimate NBA Championship?

Would Curry Versus James be the Ultimate NBA Championship? By Amy Lignor   Yes…there are questions, quite a lot of them this year when it comes to “Who will take it all in the end?” But the most talked about continues to be whether or not LeBron James will reach his 5th straight finals, and, if he does, could Stephen Curry finally top a spectacular season with the Warriors by beating the ultimate LeBron and his Cavaliers and taking … END_OF_DOCUMENT_TOKEN_TO_BE_REPLACED

The Best Car Investments of 2017…So Far

The Best Car Investments of 2017…So Far by Amy Lignor   When the automobile industry ushered in its ‘best’ with the New Year, the rankings were released by U.S. News & World Reports, as well as other critics out there. And some have most definitely lived up to the hype. As we get ready to place the first half of 2017 behind us, and more and more buyers are looking to invest in a new automobile, it’s time to review what can … END_OF_DOCUMENT_TOKEN_TO_BE_REPLACED 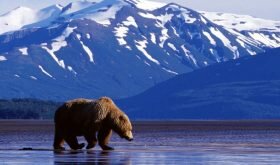 It’s Time to Travel to These Wonders of the World that May Soon Disappear by Amy Lignor   When it comes to travel, there are many locations you and your family should take the chance to see. However, there are also a few that should be seen now, before they become listed among the “missing” Wonders of the World. It is a fact, no matter how you look at life, that the Earth is in danger when it comes to global warming, air … END_OF_DOCUMENT_TOKEN_TO_BE_REPLACED

Creating the Perfect Vegetable Garden by Amy Lignor   Many are still dealing with that wintery mix Mother Nature just loves to toss down from the sky this time of year. Yet, that gardener living inside the soul – the one just dreaming of the sunny skies and lazy rainy days that are must-haves in order to grow the best vegetables possible – is already jotting down the facts, tricks and tips they need to know in order to make that … END_OF_DOCUMENT_TOKEN_TO_BE_REPLACED