Anne Perry Brings Back William Monk in A Sunless Sea

Anne Perry Brings Back William Monk in A Sunless Sea

It’s never a surprise to say that Anne Perry has created yet another unforgettable book featuring William Monk. For those of you who have been on an island with no libraries or Kindle service, Monk is the Commander of the Thames River Police, and his longtime friend is Barrister Oliver Rathbone.

It is November, 1864, and Commander and Mrs. Monk, along with Oliver Rathbone, are investigating the murder of a very expensive prostitute on the London docks. In addition they are looking into the apparent suicide of Dr. Joel Lambourn. It seems that Dr. Lambourn had supported Zenia for many years, and was also creating a report to send to the government on the abuse of opium in England; he’d just finished and was about to unveil the horrific issue and ask for regulations of this very dangerous drug.

It would seem that most Londoners wouldn’t care very much about the murder of a prostitute, except for the fact that her demise occurred very openly and was horribly done. And finding out that the person who’d paid all her expenses each month had also turned up dead, well…the people want to know more.

Barclay Herne, who is the brother-in-law of the dead doctor, is part of the Commission and involved in the whole case; and Dr. Lambourn’s widow, Dinah, tells Commander Monk that he did not commit suicide, and insists that he investigate. Little does she realize that by making Monk reopen the case, she will end up being arrested and charged in her husband’s murder. But did she do it? And who, exactly, took out the prostitute, and why? Was someone afraid of the government report, or is this a crime of jealousy?

The cast of characters are fascinating as always and there’s a whole lot of courtroom drama from Rathbone, who’s worried one minute and intensely  brilliant the next.

A truly entertaining novel (as always) and full of intrigue. Readers of Victorian suspense will eat it up! 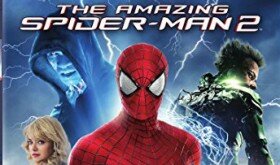 The Amazing Spider-Man 2 DVD Review by Kam Williams   Scintillating Spidey Sequel Set for DVD Release               If the idea behind a sequel is to up the ante in terms of bombast and intensity, then The Amazing Spider-Man 2 certainly fits the bill. This installment is bigger and better and louder and longer, featuring more villains, next generation special f/x, more captivating action sequences, and even a fully-blossomed romance … END_OF_DOCUMENT_TOKEN_TO_BE_REPLACED

Thoughts from a Unicorn: 100% black. 100% jewish. 0% safe. by MaNishtana Foreword by Saul Sudin Hyphen Publishing Paperback, $19.95 392 pages, Illustrated ISBN: 978-0-61574758-3 Book Review by Kam Williams “Born to an African-American Orthodox Jewish family, MaNisshtana has spent his life being Black, being Jewish, fielding questions and accusations from all sides, and occasionally just Being. Through this witty, straight-talking … END_OF_DOCUMENT_TOKEN_TO_BE_REPLACED

For our March Walk on White, we will be feauring works by Elizabeth Devries, Coco Eriksen, Helen Harrison, Vera Vasek, and more of your favorite Harrison Gallery artists. Like us on … END_OF_DOCUMENT_TOKEN_TO_BE_REPLACED

Republic Ranches: A Brokerage Firm Dedicated to the Land & Devoted to the Client   Large tracts of land perfect for the outdoor pursuits whether rattling deer in the brush country, calling ducks on the prairie, casting top waters for bass on an East Texas lake or working cattle in the big country - ranches, farms, and rural settings that are found across all the eco-regions of  the Lone Star State and Oklahoma. These … END_OF_DOCUMENT_TOKEN_TO_BE_REPLACED

Laugh Until You Cry ~ Amy Lignor I was a kid. I had the best family imaginable, yet I felt out of place. The only thing I could really do well was make up jokes when others weren’t feeling all that good. Even today, as my Mom struggles with retirement and getting older, she’ll cry at times because she feels like a burden (which, by the way, she is not). But even at those times, I can tell a joke, or change my voice in such a way that makes the … END_OF_DOCUMENT_TOKEN_TO_BE_REPLACED

Tidewater Boats Leads Way in Value Segment Center Consoles by Capt. Ted Lund   Whether it’s the diminutive 1784 Skiff or the flagship 2800CC, Tidewater Boats is leading the way for boaters in the market for a center console. Few —if any manufacturers —offer the combination boat lengths, horsepower, performance and materials and craftsmanship in this market segment, according to Tidewater’s Marketing director, Jai … END_OF_DOCUMENT_TOKEN_TO_BE_REPLACED

A Summer of Prodigal Sons

A Summer of Prodigal Sons ~ Amy Lignor There hasn’t been this much ‘buzz’ about prodigal sons returning home since…well, the actual prodigal son returned home. But within the ridiculous web of intrigue that LeBron James has brought to the sports arena – a man who is now heading back to a new ‘welcoming’ fan base who once thought that LeBron’s face on urinal mats was a home décor item that could not be lived without – comes a prodigal son of the … END_OF_DOCUMENT_TOKEN_TO_BE_REPLACED

How Can YOU be Part of the GROUND FLOOR Mega Hit, Nerium, in Canada?  ~ Betsy R. Smith Sales hit $1 million in just 2 weeks as Nerium International hit the ground running in Canada!  And that was just in 2 provinces.  Now open throughout Canada, momentum is building and the operation is running smoothly.   Ever want to be in the right place at the right time?  This is it.  Check out some of the news from the Nerium Blog about Canada … END_OF_DOCUMENT_TOKEN_TO_BE_REPLACED

FIRST PEOPLES BUFFALO JUMP, Southwest of Great Falls, MT   The Interpretive Center wasn't open @ 8 a.m., I just drove on and found signs for the higher access to the Buffalo Jump off the rocks, over the ledge ~THE Buffalo ran and their legs, necks, backs were broken in many places and the People finished them off! I took many pictures and the first animal besides a small flock of Raven was a big fat Rock Chuck who posed for me, … END_OF_DOCUMENT_TOKEN_TO_BE_REPLACED

A Glass Stadium for the NFL Causes Environmental Issues  ~ Samantha Lewis The NFL is all about hitting, ensnaring the QB and building up the number of sacks on your resume. Football is a contact sport, and most certainly would be boring if Manning, and others, simply wore a flag at their waists and nobody ever went down on the turf. However, there are environmental issues to consider when it comes to the NFL. No, we are not talking about … END_OF_DOCUMENT_TOKEN_TO_BE_REPLACED