An Evening with Janis Ian at the Ponte Vedra Concert Hall Wednesday, May 1 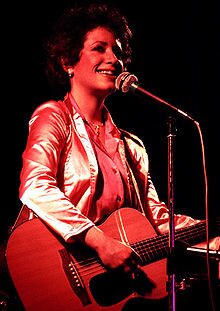 Ian began her journey into the folk music scene age of 12 when she wrote her first song “Hair of Spun Gold” and was published by Broadside Magazine. At age 13, she played her first New York show at The Village Gate and headlined at Greenwich Village’s Gaslight Cafe at 15. She received her first Grammy nomination in 1966 as Best Folk Performance. In 1975, Janis won a Grammy Award for Best Pop Female Vocalist with her song “At Seventeen”. The album, Between the Lines, hit #1 on Billboard’s Album chart. It was quickly certified Gold and later earned a ‘Platinum’ certification for sales of over one million copies sold in the US. 1975 continued to be a stellar year for Ian as she peformed on the very first episode of Saturday Night Live.

Her song “Fly Too High”, from the soundtrack to the Jodie Foster film “Foxes”, reached #1 throughout Europe, Africa, Israel, and Australia. Her album Night Rains goes paltimum and double platimum in those territories. She is also became very popular in Japan. Her album Aftertones was #1 in Japan for an entire year. Janis’s music was also featured in a Japanese film “Virus”. She has received a total of nine Grammy nominations throughout her career. Janis performed a new version of “At Seventeen” about Jerry Seinfeld on The Howard Stern Show. In 2002, “Society’s Child” was inducted into the Grammy Hall of Fame and “At Seventeen” was inducted in 2008.

Tickets for this seated show will go on sale this Friday, January 18th at 10AM. Tickets will be available for purchase at the Ponte Vedra Concert Hall and St. Augustine Amphitheatre box offices, findmytix.com, and all Ticketmaster outlets.