The conventional wisdom for shooting a sequel to a successful action flick is that “bigger is better.” In the case of  this bigger-budgeted follow up to Olympus Has Fallen, that translates to bigger guns, more elaborate chase scenes, a higher body-count and more bombastic pyrotechnics, including my favorite staple of the genre, exploding cars careening off cliffs in flames.

At the point of departure, we find the Bannings picking out paint samples for  their first baby’s nursery. Leah is due in a couple weeks, and the prospect of fatherhood has Mike seriously contemplating retirement. But before he has a chance to tender a letter of resignation, word arrives that the British Prime Minister has just passed away unexpectedly.

Over his worried wife’s objections, Mike grudgingly agrees to join the detail accompanying the President  to the funeral. Despite very heavy security in London, all hell breaks loose when radical Muslims disguised as Bobbies and Beefeaters open fire, assassinating several of the 28 leaders of the Free World in attendance.

Mike instinctively springs into action, endeavoring to escort the President via limo from Westminster Abbey back to Air Force One. Of course, this is easier said than done, since it’s almost impossible to tell the good guys from the bad, and terrorists armed with automatic weapons and RPGs are lying in wait at every turn. Also aboard for the hair-raising, roller coaster ride are Director Jacobs , Agent Bronson (Andrew Pleavin), and an MI6 Agent (Charlotte Riley) they encounter along the way.

With the help of cartoon physics and a bulletproof physique, Mike ultimately manages to prevail against the army of bloodthirsty jihadists doing the bidding of the diabolical mastermind, Aamir Barkawi (Alon Aboutboul). Let’s just pray that he’s up for a third round of heroic exploits to keep the world safe for freedom and democracy.

Criminal DVD Review by Kam Williams Ryan Reynolds' Brain Swap Drama Arrives on DVD CIA Agent Bill Pope (Ryan Reynolds) was in London on assignment to deliver a ransom to a computer hacker called the "The Dutchman" (Michael Pitt) when he was assassinated en route by a terrorist (Jordi Molla) with a vicious gun moll (Antje Traue). This would ordinarily be a big loss for the Agency, given the veteran spy's talents and … END_OF_DOCUMENT_TOKEN_TO_BE_REPLACED

From #Black Lives Matter to Black Liberation by Keeanga-Yamahtta Taylor Haymarket Books Paperback, $17.95 286 pages ISBN: 978-1-60846-562-0 Book Review by Kam Williams “The eruption of mass protests in the wake of the police murders of Michael Brown in Ferguson, Missouri, and Eric Garner in New York City have challenged the impunity with which officers of the law carry out violence against Black people and punctured the illusion of … END_OF_DOCUMENT_TOKEN_TO_BE_REPLACED

ACRONYM TO FOLLOW by Peter Brav   Finally Our Day has come There’s a Day for everything For doughnuts, siblings, eight track tapes Grilled cheese, daughters and sons to work Encouragement, Alzheimer’s Coffee, math, chewing gum Blasphemy, yo-yos And now finally One for us Truly a Day to celebrate National Don’t Shoot An Unarmed Brother Doctor King Not Seeing Progress George Orwell Laughing It Is So About the … END_OF_DOCUMENT_TOKEN_TO_BE_REPLACED

New Home Sales Jump in April By Burt Carey Sales of new homes hit their highest rate since 2008 in April, according to the Commerce Department’s U.S. Census Bureau. April sales increased 16.6 percent over March figures, which correlates to a seasonally adjusted rate of 619,000 home sales projected for the year. The median price of those new homes was $321,000, the highest median price ever recorded. That’s up 9.7 percent … END_OF_DOCUMENT_TOKEN_TO_BE_REPLACED

FEMA Says: Open Your Eyes or…No Cash by Amy Lignor The horrible news coming out of South Florida is endless, as sea water enters and overpowers the Biscayne Aquifer. Salt water has already been recorded as being located six miles inland in Broward County, but is not likely to stop there. It’s not only the fact that this is a highly populated area, it is also a fact that ninety percent of all South Florida receives its drinking water … END_OF_DOCUMENT_TOKEN_TO_BE_REPLACED 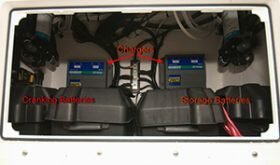 Understanding How Marine Electrical Systems Work   The electrical system on your boat is the power behind the power. Without it, the outboards won’t start, the pumps won’t pump, the lights won’t illuminate and the navigational electronics show only black screen. Many boat owners don’t have a basic knowledge of the electrical system on their vessels and that lack of knowledge can result in lost days on the water or worse. Today’s … END_OF_DOCUMENT_TOKEN_TO_BE_REPLACED

Tiger Woods Opts Out of U.S. Open, Quicken Loans By Burt Carey Tiger Woods isn’t ready to stage a comeback just yet. The 14-time major champion sent messages via Twitter and his website Tuesday that he would not be competing at either the U.S. Open at Oakmont next week or the PGA Tour’s Quicken Loans tournament the following week. "While I continue to work hard on getting healthy, I am not physically ready to play in this year's … END_OF_DOCUMENT_TOKEN_TO_BE_REPLACED

Feds Eyeing a Crackdown on Predatory Payday Lenders By Burt Carey The federal Consumer Financial Protection Bureau is proposing new regulations designed to place limits on excessively high-interest loans issued by short-term lenders. The CFPB proposal would require so-called payday lenders to prove borrowers have an ability to repay a loan by the time it comes due – usually by the borrower’s next pay period – without having to … END_OF_DOCUMENT_TOKEN_TO_BE_REPLACED

While Chasing the Red, White & Blue You Can Chase Aliens Too! by Amy Lignor   There are moments in history that made various locations memorable, for one reason or another. And in a small town, in the blistering heat of New Mexico, one incident – THE incident, if you will – occurred in 1947 and changed that small town into a strange little mecca. This incident still brings thousands of visitors every year to “see” if … END_OF_DOCUMENT_TOKEN_TO_BE_REPLACED

The Best in Sustainable Architecture for 2016 by Amy Lignor   With each new day, each new climate change report, each new testament that the Federal government will no longer help an individual state if the states don’t realize that climate change is a serious issue, more and more people are starting to understand that the world around us needs human help in order to continue to grow and stay healthy for the next … END_OF_DOCUMENT_TOKEN_TO_BE_REPLACED