A New, Young No.1 in Golf Has Tiger Snapping at His Heels!

A New, Young No.1 in Golf Has Tiger Snapping at His Heels!

As all golf lovers know, the Honda Classic is a PGA Tour tournament that’s played every March in the sunny state of Florida. Founded in 1972 as the Jackie Gleason Inverrary Classic, it was in 1981 that American Motors (AMC) backed the tournament. Ever since, the American Honda Motor Co., Inc. has been the title sponsor.

Well, this past weekend a man we have spoken about before in the past few weeks, Rory McIlroy, made sure to win that Honda Classic and become the new No. 1 golfer in the world.

This guy is what one would call extremely calm. If he is nervous on the inside he certainly has found a perfect way to cover it up. Apparently, Rory did not even set eyes on the scoreboard in the final round until he walked out on the eighth green and looked up at a large video screen. There, Tiger Woods – who had started the day at nine shots behind – was already tied for fourth place, just four shots behind McIlroy.

McIlroy didn’t seem to bat an eyelash with this information. In fact, his game showed absolutely no ‘wobble’ whatsoever until he was lining up a putt on the 13th green. His 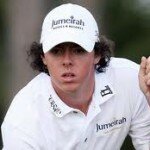 never-ending concentration was broken by a huge cheer that could be heard a mile away from the 18th green. This scream was louder than drunken head-bangers at a Motley Crue concert back in the 1980’s. McIlroy did not have to think long and hard to know that this particular scream came from the fans of Tiger Woods; fans that will never disappear no matter what the guy does.

Now, you have to understand that some seriously celebrated golfers have won this tournament in the past, including two-time winner, Jack Nicklaus. The tournament did, however, acquire a reputation for struggling to attract the top players in the country when it moved from course to course in South Florida. It has only been since 2007 that the Honda Classic has seen a vast improvement in their player field, due mostly to the PGA National’s decision to be the permanent home for the tournament.

The prize money is comparable to other PGA Tour events however, with the total purse in 2012 being $5,700,000 (not exactly the right price though, considering all you have to do is walk around and hit a ball without having to duck and run a defense that could kill you. But…to each his own).

McIlroy stated that Tiger Woods wasn’t really on his radar until that grand cheer. In fact, he stated that he wasn’t really paying much attention to any of the players until Woods sunk that eagle on 18. McIlroy said: “I heard the huge roar, and it definitely wasn’t a birdie roar. That’s when I knew he probably got to 10.”

McIlroy was correct. A 10-under par occurred for Woods – a 62 – his lowest score ever in a final round in his fifteen years on tour. The birdie-eagle finish, just like the Tiger Woods that everyone remembers and seems to want back with a passion, brought him to within one shot of the lead, and McIlroy was still faced with a stretch of golf that included water in play on every shot over the last four, frightening holes. But those four holes are what proved to the world that, even if you want Tiger, McIlroy is beyond worthy of the No. 1 spot in golf.

Making an 8-foot birdie putt on the 13th, McIlroy got back his cushion. Standing over 65-feet away, in grass so deep that Crocodile Dundee would’ve had a hard time getting through it, McIlroy gouged out a wedge to 4-feet for a par. On No. 15 and 17, he came out of the bunker towards the water and saved par both times. He didn’t even think to play it safe until the very end was in front of him, making par on the last hole for a 1-under 69. Yes, the crowd seemed a bit upset and maudlin that Tiger would not be the winner for the day, but this performance did make McIlroy the 16th player in the No. 1 spot in the world and the second-youngest – behind Woods, of course, who was only a mere twenty-one when he reached No. 1 after the U.S. Open in 1997.

This was McIlroy’s fifth career win, with three of those coming on the PGA Tour. This includes his record-setting and unforgettable performance last year at Congressional to win the U.S. Open, as well as a 62 in the final round to win at Quail Hollow.

McIlroy was beyond beaming as he stated: “It was always a dream of mine to become the world No. 1…but I didn’t know that I would be able to get here this quickly. Hopefully I can hold onto it for a little longer.”

Maybe he will. But with the Masters only a month away and good, old Tiger hitting the ball so well that he should never be counted out or tossed aside when it comes to this game, McIlroy may have to work even harder the next time around.

Did Tiger have something to say? Oh, yes. As humbly as possible, Tiger stated that: “It feels good, because I felt like I was close. I’ve been close to shooting this score, or scores like this, and it was just a matter of time before things all fell into place.”

What McIlroy and all the rest of the golf world will need to be prepared for is the fact that Tiger Woods isn’t over. In fact, it is just a matter of time before it all falls into place for him and, most likely, begins to steal those headlines as he raises his trophies in the air once again – taking back his triumphant world of victories.

On to the next tournament where McIlroy holds that No. 1 spot with the intention of keeping it as long as he can. We’ll just have to wait and see how long that ‘calm’ façade lasts, and how long it will take for Tiger’s face to appear triumphant once again.

Recently I made a discovery that the reason it feels that I have been swimming against the current all by myself trying to figure out what’s wrong is because I am in a vast sea of people who are all around me thinking the same thing. Haven’t you felt it too? Some strange inertia holding you back from that next realization that will give you the breakthrough financially? in your relationship, in your self worth and value? in meaningful work? … END_OF_DOCUMENT_TOKEN_TO_BE_REPLACED

Jeff Boswell of Republic Ranches: Increasing Return by Enhancing the Land   In the real estate realm, people will find just about everything. But when it comes to finding the right real estate brokers who not only know the area they represent, but are also true land stewards at heart, it is Republic Ranches that stands alone at the top of the pack. There are many reasons for this, but the one that definitely makes them unique … END_OF_DOCUMENT_TOKEN_TO_BE_REPLACED

Darryl and Tracy Strawberry “The Imperfect Marriage” Interview with Kam Williams Team Strawberry!   Darryl Strawberry was a prodigious home run hitter who won four World Series as a member of the New York Mets and New York Yankees. The retired baseball great was also the National League Rookie of the Year in 1983 as well as an 8-time All-Star over the course of his storybook career. Today, Darryl’s purpose and passion is … END_OF_DOCUMENT_TOKEN_TO_BE_REPLACED

Effective Shotgunning for Deer: A penetrating argument for using quality slugs   The buck steps from behind a tree.  There’s your shot—broadside, a mere 50 yards away, a clear path.  Your shotgun barks, and the big deer drops in its tracks, perfect shot placement just behind the shoulder…exactly the way it’s supposed to be. Trouble is, few things in hunting turn out the way they’re “supposed to be.”  More likely the … END_OF_DOCUMENT_TOKEN_TO_BE_REPLACED

NFL: Forget the Experts & Break Out the Crystal Ball ~ Amy Lignor It is already fun to look back on the experts original picks for this NFL season and see how they have begun. This is no crystal ball…right? After all, experts know the rookies, the oldies, the challenges, the coaches, the stats, and everything in between – so the picks by the experts should definitely be far more educated than ours would be if sitting around a table … END_OF_DOCUMENT_TOKEN_TO_BE_REPLACED

Recently I was invited by a friend of mine who is a photographer for the oil and gas industry to go on a tour of a Colorado local energy company, Noble Energy. I went because I am the idiot who likes to hear both sides of a story. I'd also prefer to know something first hand than hearsay. So I went to learn about Fracking. I went on this tour with the same basic knowledge that most of the people I know have about Fracking. 1. Fracking is … END_OF_DOCUMENT_TOKEN_TO_BE_REPLACED

The Mystery & Myths of the Badlands   Badlands National Park is not only one of the most amazing scenic spots in the world, but it is also one of the most eccentric. That area is a type of other-worldly experience, as if the land holds mysteries and myths hidden deep within the buttes. The high rock formations seem to dare and challenge you to reach the top; perhaps climb as far and fast as you can in order to meet the … END_OF_DOCUMENT_TOKEN_TO_BE_REPLACED

The ‘Green’ of the Gaming Industry  ~ Samantha Lewis ‘Green’ comes in two forms with the gaming industry in 2014. The ‘green’ – as in cash – is what the gaming industry is seeing more and more of these days. There have been huge deals announced in the marketplace just this past week – with Amazon buying Twitch for $970 million dollars. Twitch is a service, by the way, that is actually based on allowing users to watch and broadcast video game … END_OF_DOCUMENT_TOKEN_TO_BE_REPLACED