A ‘Bow and a Curtsy’ to the London People!

A ‘Bow and a Curtsy’ to the London People!

Rio looks as if it will be a blast; a fun ‘party’ atmosphere for the 2016 Olympic Games. But before we get our ‘samba’ on, we need to take a moment to look back and thank the United Kingdom for a truly fantastic global event. The 2012 Olympic Games was a job well done! 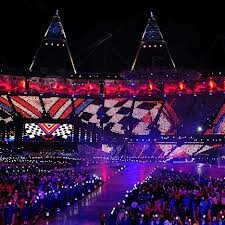 As a watcher from home, although there were slight ‘bumps in the road’ every once in a while, I am stepping away from the 2012 Olympic Games with a full heart and a new love for London and her people. And, no, I’m not being sarcastic at all. From the UK’s ‘green’ initiative that they implemented in their pre-planning stages in order to help the environment while also giving everyone an Olympic Games to remember; to their stunning ‘kick-off’ which offered historical moments as well as some of the most amazing characters from literary history ever created – London certainly pulled out all the stops! They also were kind enough to add their legacy of music and, frankly, focused on politeness to the ‘common’ man that this side of the pond has actually been missing during this here election year.

As the huge event came to an end last night, I was thrilled to have been a part of this truly cool city that I now want to visit for more reasons than just to hope I run into Mr. Darcy (No, not Firth, MacFayden).

The closing ceremony for the very first time at the Olympic Games was fast; it was entertaining and did NOT bore anyone at all. You know how hard that is to say about an Olympic Game closing ceremony? Most cities tend to go overboard, but London kept this ceremony extremely interesting. Winston Churchill got his kudos (as he should), as well as a celebration for the beautiful Union Jack (the Union flag dating back to 1603 when James VI inherited the thrones uniting the crowns of England, Scotland and Ireland in a ‘union.’ As a person who loves her own flag, it was a stunning and lovely sight to witness.

Bands we all know and love like the Pet Shop Boys (who are truly fun) were there, and the star-studded music kept everyone singing and dancing and happy to be alive, which is what the coming together of nations should always accomplish.

I personally loved the monochrome creations of London’s coolest landmarks covered in newsprint. Big Ben, Tower Bridge, everything was just amazing and a thrill to see. Not to mention, London accomplished something else with all this hard work. They made us all want to visit over there in the coming years to see this incredible city up close. In fact, missing out on a trip to London would be something that we’d all regret. I have a feeling that this is a city and a country that should be explored.

Another favorite moment was when the athletes converged into the stadium where they all stood together on the field. I wish everyday life could be held like the Olympics, with no anger, war, nothing. Just a firm belief that all countries can work together and play together in peace.

Alas, since that is not going to happen within my lifetime, I do want to also give a shout out to the Brazilians who took a few minutes to show a little bit of what all could expect when the Olympic Games went to Rio in 2016. The sambas were cool and truly did give that vibe that it would be a party to remember.

This is one Olympic Games that will be seen by Londoners, as well as the rest of the world, as a complete triumph. Even the British athletes can scream out loud and proud for collecting many medals this time out, and even a world record in the mix.

Usain Bolt became an actual legend by repeating his magnificence as champion in the 100-meter and 200-meter sprints. Michael Phelps left London as the most decorated Olympian in history, and Mo Farah (a British runner) became London’s ‘it’ girl when she took home the gold for the 5,000 and 10,000-meter races. Jessica Ennis, as well, will forever be remembered for her phenomenal victory! You must also add in Great Britain’s Men’s Team Pursuit event in cycling, which was where their squad broke the world record and in the final came back to take the gold by leaving Australia in the dust.

The UK can now get some much-needed and well-deserved rest. I’m sure most of the locals can’t wait to get rid of all the visitors so they can take a deep breath and head out to work to resume normal life. But their chests should definitely be filled with pride because of all they have accomplished. Any goal set was done with perfection!

Yes, the United States did walk away with a total of 104 medals this time out, but the British came in third with a fantastic 65, and they were all fought for with passion and drive that I now see as a huge part of British culture. Again, no, this is not a knock. I am literally a person whose exposure to ‘across the pond’ was limited to Jane Austen novels. But after this Olympic spectacular, I find London’s people to be among the most honorable, skilled and devoted people out there.

Ok. I know this may be hard to believe but some of you didn’t know that I was a contestant on the GSN (Game Show Network) new bodypainting reality contest show, Skin Wars. Produced by Michael Levitt and Jill Goularte. Hosted by Rebecca Romijn. Judges were RuPaul, Craig Tracy (my personal hero) and Robin Slonina of Skin City. It is still currently airing Wednesday nights 9pm eastern/8 central on GSN. If you want to find the channel in your area go … END_OF_DOCUMENT_TOKEN_TO_BE_REPLACED

When owning property, there’s a list of information, rules, regulations, and rights the landowner needs to know in order to make sure that their property meets their objectives, whether it be a recreational or commercial investment. And for some, when it comes to managing resources and receiving the best benefits available, use of a tool referred to as a ‘conservation easement’ is one path to take.   By putting a … END_OF_DOCUMENT_TOKEN_TO_BE_REPLACED

Tested: Wicked Ridge Crossbow's Invader HP For a company that's been around for less than a decade, Wicked Ridge Crossbows has stormed onto the hunting scene with an impressive array of equipment, and its most recent introduction, the Invader HP crossbow, is perhaps its most remarkable product yet. If you read the company's advertising, you know Wicked Ridge to be "TenPoint Tested, TenPoint Tough," a less than subliminal message … END_OF_DOCUMENT_TOKEN_TO_BE_REPLACED

The ‘Invisible’ Manning WILL Be Heard! ~Amy Lignor Yes, we all hear about Peyton and his Broncos almost every minute of the day. But it seems, thus far, that his little bro (the one with more rings than his brother, but far less press), is having the time of his life right now. He is setting the Giants up to look good – very good – as contenders this season. And he has one thing his poor brother doesn’t have, receivers he knows and can work … END_OF_DOCUMENT_TOKEN_TO_BE_REPLACED

Recently I was invited by a friend of mine who is a photographer for the oil and gas industry to go on a tour of a Colorado local energy company, Noble Energy. I went because I am the idiot who likes to hear both sides of a story. I'd also prefer to know something first hand than hearsay. So I went to learn about Fracking. I went on this tour with the same basic knowledge that most of the people I know have about Fracking. 1. Fracking is … END_OF_DOCUMENT_TOKEN_TO_BE_REPLACED

The ‘Green’ of the Gaming Industry  ~ Samantha Lewis ‘Green’ comes in two forms with the gaming industry in 2014. The ‘green’ – as in cash – is what the gaming industry is seeing more and more of these days. There have been huge deals announced in the marketplace just this past week – with Amazon buying Twitch for $970 million dollars. Twitch is a service, by the way, that is actually based on allowing users to watch and broadcast video game … END_OF_DOCUMENT_TOKEN_TO_BE_REPLACED