Irina Muschik Takes Adventure Science to the Next Level

The night was clear, I saw all the beautiful stars up there, I listened to some night birds, saw a praying mantis right next to my head and in the morning I saw the sun rising over this red-brown-gray-green semi-desert.” – Irina Muschik

Irina Muschik is on a mission to meet some truly incredible people. Irina has been backpacking on her own from Germany to the far eastern portions of Russia, and interviewing researchers and conservationists along the way. 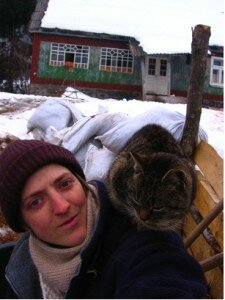 Her cross-continental journey is as inexpensive as possible; she has been hitchhiking and using buses and trains while camping and staying on couches whenever possible. From Eastern Europe through the Caucasus, Russia and Northern and Central Asia, her goal is to show a lesser seen side of conservation by documenting the people who have dedicated themselves to science and research in these areas.

Irina is a trained wildlife biologist, specializing in raccoon behavior in one of Germany’s national parks. This background gives her a passion and an understanding for conservation that facilitates her work as she meets a wide variety of people in her travels. It has also enabled her to visit some field sites, and even participate in the work of local researchers. On her website, www.greentrousers.org, Irina has already posted many of her interviews. The questions and responses paint a portrait of each researcher, providing insight into the many diverse and fascinating projects currently underway. What’s more, Irina’s interviews bring out the human side of wildlife research by questioning researchers on goals, feelings about conservation, and favorite places and experiences.

As valuable as this is, Irina recognized that there was even more potential in her experiences as a traveling biologist. Working through Adventurers and Scientists for Conservation, she has been paired with Suzanne Leroy and Andrew Smith to collect data in hard to reach places. Leroy is studying the Caspian Sea, an environment that has changed a great deal over time, but is rarely studied due to the difficulty of accessing the area. Leroy is attempting to reconstruct the climate, salinity, and vegetation changes that have occurred in this environment since ancient times, but in order to form a complete picture she needs current data. Irina collected mud samples and notes on her observations from Azerbaijan, Kazakhstan, and Kyrgyzstan. These will give Leroy an idea of current conditions and any fossils she finds in the samples will aid her in developing an understanding of how ancient conditions have evolved into the current environment. “Collecting mud in kind of semi-arid landscapes was quite challenging,” Irina said. “But I´m a passionate observer of my surroundings and therefore I found enough signs in nature (to) lead me to a bit of mud.”

Andrew Smith is a pika researcher at Arizona State University, and Irina is collecting information for him as well. Pikas are being poisoned in Asia, due to their reputation as pests. In her quest for pika sightings, Irina is also talking to locals about their perceptions of the rodents and why and how they are being poisoned in various areas. Additionally, she has collected information on “mumeo,” a product often containing pika feces that is used to treat rheumatism as well as a number of other ailments.

With pika research, mud collection, and interviews, Irina is certainly staying busy during her travels. She is currently in South Korea and has plans to spend several months in China after that, with Mongolia on the horizon for March or April. Due to the remote nature of the areas through which she often travels, Irina frequently spends weeks at a time without access to the internet. However, continue to check back on her website as she posts more interviews, and watch for more updates about her here on http://www.adventureandscience.org/blog.html/, as she contacts ASC when she can.