Boxers to be Euthanized in Monroe for Defending Owner’s Property

Since April this year, four boxer dogs have been held at the local animal control in Monroe, MI, as they are accused of being vicious for biting a teenage girl who happened to be on their property while the owner wasn’t home. 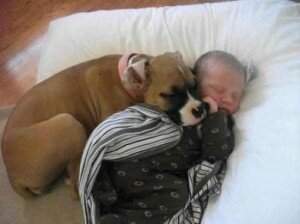 One of Timothy’s accused boxer dogs in Monroe

The story did not get media coverage except for a brief report on Action News Channel 7 which did not include the owner’s side of the story. But now, after months of struggling to get justice and failing in his quest, the owner is turning to gather public support before his dogs are killed by the animal control.

The Journal of Humanitarian Affairs published the untold story of how Timothy Iocoangeli’s pet dogs were seized by the Monroe County Animal Control in April this year when two teenage friends of his son – a boy and a girl – tried to get inside the house while neither Iocoangeli nor his son was home. Acting on their defensive instincts, a female boxer named Brooklyn inside the house bit the girl who tried to enter the house; the Channel 7 story tells she was inside the house when the Brooklyn, the mom of 5 young pups – attacked her. Yet, says the owner, the animal control, seized all his dogs including the litter of 5 pups and caged them at the pound where he has not been allowed to visit them.

Iocoangeli’s appeals were turned down by the animal control and courts and he says that no independent assessment of the dogs was made by an expert in dog behavior. A source present in the court says that testimony was brought against three dogs to have bitten the girl – which was accepted as true without evidence. But even if the three were dangerous, why the fourth one is being euthanized and why the puppies were seized and whether they will be killed too – if still alive – are questions unanswered, even unasked by media or explained by authorities as is the question of trespassing in which case the dogs can’t be deemed dangerous by the city’s own laws.

With no more appeals at hand, the declared-dangerous boxers are helplessly waiting for help – which perhaps won’t come except in from of death. As a final effort in the desperate struggle for the dogs, an online petition addressing City of Monroe, Mayor Robert E. Clark and County Commissioners has been launched to ask the authorities to spare the dogs’ lives. It is feared that Monroe Animal Control will euthanize all the dogs this week and even continue to hold charges of keeping dangerous dogs in home against Timothy Iocoangeli. But how dangerous are his dogs? Perhaps the picture of one of them included with this post shows better.