As early in the spring as possible, let’s say within a few days of the last possible frost, one should begin to plant as many kinds of lettuce and greens as possible. I usually throw in some seeds into close proximity to one another at 3-4 day intervals so that the greens are coming up, ready to eat all the way from mid-spring until almost mid summer. Over time you will find some varieties in your region that resist bolting to seed when the hot weather comes. You’ll want to plant those toward the end of your successive plantings.  In some locations like Florida you can also have late Fall lettuce. Just wait to plant until the very warm summer weather starts to decline–early to mid October.

In a separate but nearby location you can put in some lettuce that will produce heads or at least some nicely folded back leaves before the summer heat sets in. I like 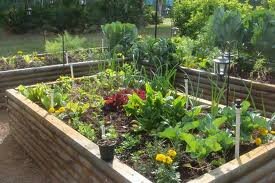 Romaine lettuce for that purpose. Also, somewhere in there you’ll want to plant arugula, cilantro, Italian and curly leaf parsley, basil and dill as well as any kind of spinach that produces tender young leaves. All of the above are excellent additions to tender, mostly leaf salads, before other salad vegetables come to harvest. Of course you may have a few early radishes and green onions to add in as well. A tender harvested early small kohlrabi is also a delicious addition to early salad greens, especially for those seeking something mild and crunchy in the salad greens. Perhaps a little Chinese cabbage works for you as well.

The greens can also be topped with a little cottage cheese and/or cut-up cold chicken, salmon, oysters, clams. The chicken or salmon can be cut up and briefly warmed before adding them to the top of the salad. A few sprigs of dill and/or fresh basil leaves are especially good added on top of the cottage cheese and meat or fish. You can add a little olive oil and balsamic vinegar as well, but when salmon is used the oil from the fish is usually enough for a dressing. A few finely cut nuts are also an excellent addition to such as salad–especially almonds or walnuts. In general, in these salads you can mix any of the lettuces together in any proportion with arugula, spinach, basil, dill, cilantro or parsley. The basil, dill and cilantro are usually quite aromatic in spring and will thus enhance flavor substantially due to their collective smells.

Probably not too long into the early summer your cherry tomatoes should begin to mature. I always plant a couple in an EarthBox and push them along a bit if possible. These are great for tomatoes as they never run out of a continuously fed water stream in an EarthBox.  The early green onions also may be used in early salads even before the early tomatoes come along, but the onions should be planted as early as possible also as late in the season when the early plantings of red onions start to get larger, they can be cut up and put into the salad as with the leeks or other onions. Late season red onions are very sweet and mild particularly if use right away. Otherwise, the larger onions and mature leaks are best used in soups and stir-fry dishes.

Later the cucumbers and the small zucchini will be in and can be cleaned and sliced directly into the salad, as can be the shavings of sweet carrots. As the greens start to wear down mid summer, you can prepare lunch plates of harvested sliced vegetables such as slices from large tomatoes, zucchini, cucumbers, topped with cut up green onions, leeks, and various colors of green or other colored sweet peppers, all covered with olive oil and vinegar to taste with maybe a little sea salt. You can top off with a small mix of cut up fresh basil leaves and dill sprigs before adding the olive oil-vinegar and sea salt. You can also cool this salad in the refrigerator for a half hour or so to let the flavors mix, usually with good effect. You can also add in a little cut-up, freshly harvested kohlrabi or celery to these vegetable mix salads as they mature or later in the season. Whatever they are composed of these vegetable plates offer a great table-centering group salad that can be portioned out as part of dinner or onto a salad plate as the main course is served. Another great table center salad is the well know Italian dish, Caprese, made from intervening slices of Mozzarella, and fresh garden tomatoes topped with sliced basil leaves and seasoned with an oil-vinegar-salt mixture.

Later in the season when the broccoli, cauliflower, summer squash come in they can be added as well to make some nice combination raw vegetable salads. The cabbages can in part be turned into a constantly available coleslaw to everyone’s delight.

All of these vegetables from greens to cabbages can be part of every garden, planted in a simple connected sequence to facilitate harvesting through to summer’s end. Following a straw, and some green manure, and leaf mulching we are ready to begin again