In 2007, the number of people living in the cities of the Earth for the first time ever began to exceed the number living in the countryside. This trend is expected to continue, and as the population expands will inflame the competition for critical resources. In some cases, competition between cities and farmers for water rights may affect the ability of farmers to feed the growing populations of cities particularly in drought-afflicted areas. When the city wins the battle, they get the water, but, at the same time, they may face food shortages as farmers in the region may not be able to grow as much. However, a vibrant economy in the city may allow it to go elsewhere for to purchase food. Cities will buy food and other commodities around the world as it is economical for them to do. Still, this policy may bring about shortages of food and other commodities elsewhere in the world.

Cities in the American Southwest, for example, already face looming water shortages, but they are not alone. In many areas of the world it is becoming increasingly difficult 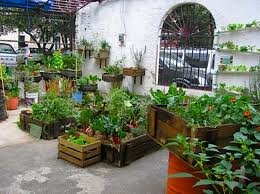 We must begin to face such issues now, not a century from now. However, there are few general solutions on the horizon. Not surprisingly, cities and their surrounding farming communities tend to see problems as they arise. As city, county and state governments  start doing something about those problems, we may begin to see some solutions that apply more generally. Maybe we won’t see anything general enough to be directly applied elsewhere, but others may learn from solutions that work to determine how to adapt them to their particular situation.

In some American cities, there is a growing trend toward gardening. People in cities have always taken advantage of the space they have to grow something in a window, on a back porch, in a back yard, on a roof, wherever. Rarely, however, are gardens of sufficient size to meet individual or family needs for subsistence. However, that could change. Some cities are starting to put vacant land to use for small or large individually tended or community gardens. In some cities like Seattle, Washington, gardening in available designated spaces has been an established policy for some time, and in Seattle the policy has been regulated since at least 1970.  People apply for designated gardening spaces. Indeed, there is a waiting list, and it may take a few years to be approved for a desired space. One then farms or gardens the space, agreeing to follow designated rules.

In Detroit, Michigan, the situation is a little different. While many in both the city and surrounding suburbs, have large enough back yards to have modest to substantial gardens only recently has city gardening and state agricultural policy become challenging. Hard economic times have strained city policies. Before that and as the city expanded outwardly both Detroit and the surrounding suburbs were crossed at many points by major freeways. Being the auto capital of America, it seemed a contradiction to construct any kind of rapid transit system: no subways and few train systems in and out or town. The property tax base of Detroit has been reduced by the multiple freeway systems significantly flowing through the city, and by dead and decaying industrial plants that have been abandoned and not yet replaced. Many neighborhoods have been stressed by people leaving, houses being abandoned and eventually torn down. The city population has significantly declined in the last ten years. Many vacant lots have now been cleaned up and leased or simply used by local residents for farming or gardening opportunities. In some cases, people have started neighborhood co-operatives. In others, they sell home grown produce at the roadside or in front of their houses. In Detroit, there may be already some attempts at multiple-family subsistence farming, but these are not yet widespread.

In some neighborhoods in the city there are only a few shops where either staples or vegetables and fruits may be purchased. Over time these neighborhoods have been partially abandoned and commercial shops have left. The community have been slow to set up alternatives.

Neither Seattle nor Detroit fit into the original premise I started with here, namely that cities fighting for water rights might be forced to grow some or much of their food, particularly if their economic circumstances preclude them from going far and wide to buy food and other commodities. However, both Seattle and Detroit show that cities may in the future adjust their living spaces to facilitate a wide development of gardening and farming strategies within their own borders. In many cases, or at least in some neighborhoods where there is sufficient land a form of subsistence farming may be possible.