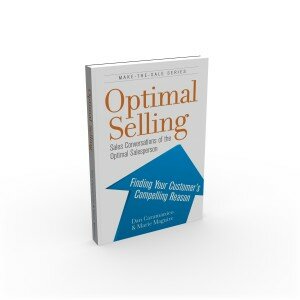 He is (or should I say was) in a business with a three month sales cycle and an average sale that should be around $$40,000 to $50,000. He had personal goals that he could attain if he sold one of those per month. If he had done that, the company would have been ecstatic and he would still have a job. His first few weeks in the field he wanted to make a good impression and get a few quick hits. So he chased the first few projects that crossed his path. The problem is they happened to be $10,000 deals without too much urgency to close. Chasing these unqualified prospects cost John valuable time. Of the four he pursued only one closed and that took four months. So at the four month mark he had one small sale and an anemic pipeline. Now his focus changed. Instead of a quick hit he needed to show a growing pipeline so he focused on the wrong thing again. This time he went after the right sized projects but he didn’t care whether they were qualified or not he just wanted them in his pipeline to show management he was making progress. So six months in, he has a pipeline bloated with prospects that will never close and he is starting to attract some adult supervision from his manager. More meetings meant more time away from prospecting. At this point he was doomed and it was only a matter of time.

John had his priorities mixed up on a daily basis. His manager and the company were not expecting a sale for the first 4 months. One month for training and tree months to build the pipeline and close his first deal. John was interested in being a hero in the first few months and forgot about a few things. He forgot about his income goals and focused on the psychic goal of being the star. He forgot about the target prospect and allowed himself to be distracted by the promise of a quick hit. Then when he got behind, he forgot everything he knew and went into panic mode which is never good. What he should have done is keep his focus on his personal goals and his selling process and his target prospect. If he had only done those three things he would never have gotten off track. This video will help explain.

To get more sales tips click here to sign up for the free OPTMAL SELLING™ weekly video sales tip.