During an extended period of global warming there is likely to be a significant movement of many biological species in addition to humans to the new habitat developing in the North. In addition to the warming itself, major physical changes in the landscape will encourage some species to leave, some to move in while some may even completely die off before they can leave.

In the Arctic, for example, a retreat of sea ice during the summer months is causing significant changes. The 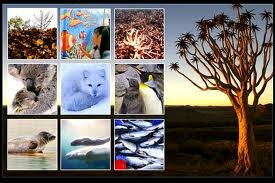 warmer weather allows evaporation rates to increase and release sea moisture into the atmosphere. This process lowers river and lake levels as well. Warming permafrost moves toward the North Pole perhaps by as much as several hundred miles over the century. Tundra vegetation will overtake some of the disappearing permafrost while the treeline will advance as well. Tundra vegetation and new trees will gradually replace the polar desert like landscape of frozen winter permafrost.

The developing forest and underlying vegetation will advance slowly, and will have problems with insects that may move in from the south, will also experience fires, tree growth stresses will appear due to milder winters, and warmer summers will influence the length of growing seasons.  A new ecology will develop as many new organisms and new plants and animals move in and battle for a place in the new forest. But all over the Arctic landscape new species will come and go.

As new species try to adapt, they will all compete and forage for the available food in a changing landscape. Some will be quite successful. Some will find it highly difficult to be successful. New animals and plants may be harassed by insects or even wiped out by parasite infestations. In the North, for example, both Caribou and Muskoxen are already affected. The size of their herds are being reduced. They also suffer from the new changing weather conditions.

With time, as the Arctic warms, freeze-up along the coasts may be delayed more and more as the century proceeds. This will also delay those species who prefer PAC-ice in winter from returning to the ice–when polar bears, for example, may die at sea attempting too lengthy a swim in the late fall as they try to return to the ice.

In the spring, ice break-up delays along the coasts could lead to flooding of the rivers attempting to release increasing melt from snows dumped more often now by the warming ocean over the land in winter. Fresh water ecosystems  will be affected as Atlantic salmon, brook trout and rainbow trout and other species will likely all extend their range. Some inward movement of non-native animal and avian species will occur as the winter snowfall increases while the winters shorten and the summers expand. At the same time, many species that had adapted to a much harder north will die off as they are replaced by new more adaptable species.

In most ways the Arctic North will become an easier place for humans to survive as the more intensely cold winters will be more and more rare, but also tics, sand flies and

black flies will extend their range into the expanding forests in the North.

Lyme disease, for example, may extend its range far into the North as the tic  which harbors the bacterium causing the disease extends it current range, which currently ends in the far south of Canada. Many other disease-bearing organisms may make inroads in the North. Most classical diseases which are currently found in very hot places and typically carried by mosquitoes  may expand also, but are unlikely to move all the way into the Canadian North. However, some have suggested West Nile virus could make its way to the Western Canadian coasts, but likely not farther to the North. As algae blooms may become more common in the Arctic as warmer and more extended summers become common, toxins associated with them–like Red Tide, but likely quite different forms as well, may also become more common. Fresh water cyanobacteria could also become an issue in lakes and streams of the North. Expanded nematode populations and other parasites entering lakes and streams, and thus into animal drinking water, could also affect humans directly from the water or indirectly through the animals.

Thus, as humans increasingly populate a more accepting and less harshly cold Arctic, the ecology will be changing and precautions will likely have to be taken where they may not have been necessary in the past. The landscape will be different, but the Arctic ice will never be completely gone, especially during winter when the Sun is completely absent.

The coasts will be fragile but expanding seas may still be quite manageable for the next several centuries, though placement of coastal villages and the increasingly warming permafrost may increasingly need to be taken into account as will the new ecology of the North. More people carving out a vastly changing culture in the North will be part of the fascinating new future possible there well into the 22nd century.