Here I raise mine Ebenezer;

hither by thy help I’m come;

and I hope, by thy good pleasure,

safely to arrive at home.

Beginning sometime in late 2011, people began going to a portion of the beach in Galveston, Texas and building things.  They began building cairns, stacks of stones.  It is wonderful public art and an expression of creativity.  I mean if God gives you rocks you make cairns right?

Cairns themselves have a long history.  Stacks of stones to commemorate special events,  special places, to mark the burial ground of someone important, or to mark the way on the path date back to early man.  Cairn is a Celtic word but the object itself cuts across cultures and time.  People have been building memories and marking extraordinary places for a long time.

“Here I raise mine Ebenezer,” comes from an evangelical hymn, “Come Thou Fount of Every Blessing.”  The idea that the author expresses in the words comes from an Old 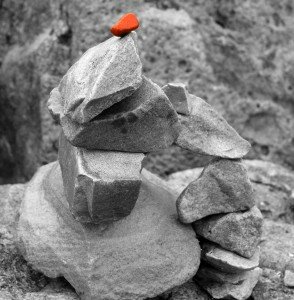 Testament passage, I Samuel 7:12.  “Samuel took a single rock and set it upright between Mizpah and Shen. He named it “Ebenezer” (Rock of Help), saying, “This marks the place where God helped us.”  (From the translation, “The Message”)  Samuel built a cairn to remember God’s help.  When I was walking through the area looking at the cairns and photographing them, that song came to mind.

We all need places to remember, places to mark the way in our lives.  We even say I have reached “a milestone.”  People used to put down stacks of rocks to mark how far a mile was.  A hiker and backpacker shared with me that they are still used on many wilderness trails today in exactly the same way.  We remember the marks along the way and arrive safely home.  Besides that, God knows we all need a little help sometime.  Perhaps the simple act of stacking stones becomes a simple way of saying grace.

The Galveston Beach Cairns tell stories about people.  They are stories where we have to fill in the blanks sometimes, but the stories told in stacked stones are wonderful.  People went down to a rocky part of the beach and took time to stack rocks in just a certain way as a work of popular art.  While we usually make things from rock so that they last, sometimes things just tumble in.

Isn’t that the way life is though?  We think we build or are building something and suddenly it just crashes down.  At times I think these cairns fell over because of the elements, the wind and surf.  Sometimes I think just the very weight of the rocks balanced one on the other caused things to just fall.  Sometimes I am sure, people built beautiful creations only to see them fall like sand castles before their eyes.

If life gives us rocks, why not build a cairn?  Why not build something that says to everyone I am here and this is me, at least the me of this moment.  But like the wind, surf and gravity, our lives sometimes are just tumbled down or get tumbled down.  What we think is solid falls apart.  What we feel is a beautiful creation seems to just slide apart.  We just cannot make it work. 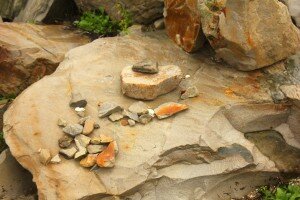 I have learned some things out of life though.  What gets tumbled down can be rebuilt.  The things we want to be solid that fade, can be picked up, rebuilt, and made new.  It is hard work doing that.  Some things that were in the first thing won’t be in the last.  Some rocks just get set aside, but what happens finally is a new creation.

Cairns are ways of remembering and have been for years.  Cultures all over the world stack up rocks and stones and say: come here, see this, and remember this person or that event.  I love Teotihuacan in Mexico, just outside of Mexico City.  It was a city at one time of over 100,000 people when the largest city in Europe perhaps had 10,000.  That is where you find the famous Pyramids of the Sun and Moon.  What did the last indigenous person think as he was walking away from that abandoned city?  Did he wonder if it would ever get rebuilt?  Did he wonder if the gods had truly abandoned him and his people?  Did he wonder if those stacks of stones would ever live again?

Like what happens in life, some of the Galveston cairns have fallen over.  I wonder if the beauty is in what was, in what is right now or what those same stones could be in the hands of someone else.  I found one place where stones were laid out, not stacked; just more like someone was doing a puzzle and had laid out all the pieces.  Did the person want to say: “Hey sometimes the beauty is in the getting ready?”  Did they want to say “Hey this is my life it just isn’t made yet?”  Or did they want to say “Hey, make of this what you will.” 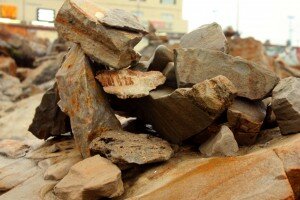 Tumbled down things and lives are not just junk.  They can be the pieces of the puzzle in the next work of art.  You just have to be willing to build it up again.  Arriving safely at home sometimes does mean we need a bit of help to get there.

Write me about any of my posts at