CBS Scot Paulsen on “2016: The Movie” The Right Politics

Interesting – CBS gives an honest, but disturbing, assessment.
CBS Scot Paulsen on “2016: The Movie” The Right Politics
This past week, 2016: The Movie about President Barack Obama opened in the Chicago area, and I chose to get more of an education about Obama by seeing the movie. After the inundation of canned hype for the movie on conservative talk shows across the Chicago radio dial that sounded more like commercials than honest endorsements of the movie, I was skeptical of what I was going to see.

While some talk show hosts sounded like they were genuinely impressed with the documentary and honestly endorsing the film,there were 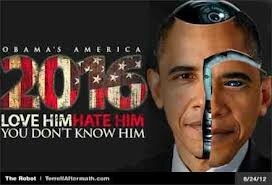 those who were obviously reading a commercial script which was not coming across as sincere to the regular listener at least not to this often-skeptical listener. Perhaps, in future promotions of the film, it would be wise to have pre-recorded commercials done by the professional commercial-makers rather than having the likes of Mark Levin and Sean Hannity doing script after script to promote the movie. After all, the listeners arent stupid and resent any attempt at being conned. After many reads by the talk show hosts, the readings of the commercial script were no more enthusiastic than another Life-Lock commercial read another commercial that ought to be professionally done.

Yet, Im glad I saw the hyped-film because it was more informative than I had thought it would be and included less propaganda than I had predicted. If anything, it was nearly too informative as there was an enormous amount of information condensed into the nearly one-hour-and-a-half documentary. Fact after fact is put forth which shows that President Obama definitely has many skeletons in the closet that have not been released prior to the nations trust in him with the Oval Office.

To watch this movie and realize or simply be reminded of all that is unknown about President Obama is of concern. Much of theinformation has been ignored by the American media totally. When appropriately reminded as to what is still unknown about Obama to date, one has to ask: How can any logical-thinking person give a damn about Romneys taxes while not asking any questions regarding our current Presidents past? The man influences the entire globe, but liberal Americans want to know how much Mitt Romney paid in taxes in the past rather than learn about the man who they have entrusted with the country. Unbelievable.

The movie undeniably links Obama to persons of suspicious-interest due to their past actions and statements, such as formerradical activist and Chicago educator Bill Ayers. While the media and blinded-liberals cast such facts aside, the movie does not. No, this portion of the movie is not propaganda it is the display of factual information about relationships between people that cannot be denied. Yet, the left does deny the facts that are right in front of them.

Quite disturbing is the talk of the United States economy in the film. The current national debt which has increased two-fold during Obamas presidency and the horrendous economy is suggested to be part of the plan to strip the nation of democracy reasonable cause to make citizens totally dependent on the government. The left is aghast at this suggestion of the current economy. They actually believe that Obama is unintelligent enough to let this economy just happen. Ironically, its many of the people on the right who know Obamas not stupid, and much of what has happened to the United States in the past four years is part of Obamas plan.

How could one so-highly educated and intelligent as Obama not know what he was doing when he incurred such debt? I left the movie thinking more strongly than I had in the past that the current debt and this economy was part of Obamas plan all along. Increasingly making Americans dependent on the government is the plan. Whats more, he knew his blind followers would believe it was not the plan and, of course, was all Bushs fault.

He must be laughing at his blind followers all the way to the new America theyre allowing him to create. My belief is that Obamacontinues to prey on his die-hard followers stupidity to accomplish his personal goals for America.

The most disturbing part of the film to me was the interview with President Obamas half-brother George Obama from Nairobi, Kenya. How can Obama claim to want to help people when he has done absolutely nothing for his own family? It makes me wonder if he really cares about anybody if he cant find it in his heart to help his own family.

As the closing credits started to role upward across the screen, the audience applauded. Me, I just walked out reasonably upset.
Those who have already decided to vote for Obama will probably not even see the movie. Its sad but they probably dont want to know the truth when it is laid out so clearly for them in this documentary. The independents who are still deciding who they are going to vote for ought to see this film. Im quite confident that any undecided voter who sees this film will know who to vote for after viewing this documentary. If you know youre not going to support the left in this coming election, see the film out of interest if you like. But, fair warning, its disturbing and quite frightening to say the least.

One Response to CBS Scot Paulsen on “2016: The Movie” The Right Politics