This broccoli rabe-portabella mushroom dish is an excellent full-flavored side. But is it also ideal for a light lunch accompanied by a small salad built on a large lettuce leaf,with a dollop of cottage cheese and a few halved cherry tomatoes. It’s also great for breakfast on a weekend morning accompanied with a couple of 3-min poached eggs. 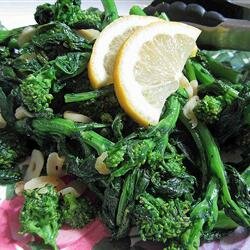 However you choose to eat it, make this broccoli-portabella dish first, timed to finish when everything else is ready. Heat a half cup of olive oil in a large skillet. Stir in three peeled garlic cloves and one-half cup of chopped red onion. This should take about 8-10 min on medium heat or until the garlic turns light brown. Stir in a few sprigs of fresh thyme and thick slices of two large portabella mushrooms.  Reduce the heat to low and let the mushrooms cook down, covering and uncovering at intervals while you cook. Season with a little salt and pepper and be careful not to overcook the mushrooms.

On the side, trim the ends from 2-3 bunches of broccoli rabe and cut it into 1-2  inch sized pieces. The amount of broccoli rabe used is partly a matter of personal preference. Some like the broccoli rabe to dominate the dish, others the portabella. Put all the broccoli rabe pieces into the steamer inside a large pot with an inch or so of boiling water at the bottom. Cover and steam until the rabe is mildly crunchy (not mushy).  You can check consistency after 3-4 minutes.   Take the broccoli rabe directly from the steamer and add to the slow-cooked portabella mixture just as it is about to finish cooking.  Stir everything and lay it all onto a warmed serving dish. Immediately sprinkle on top at least one quarter cup of freshly grated Parmesan cheese. Serve immediately or cover loosely but immediately with a little aluminum foil if it’s going to be more than 5 minutes until you eat. Usually you will have everything ready to go unless you are just beginning to poach your eggs, in which case you should finish in under five minutes–but cover the broccoli rabe-portabella dish all the same.