Separate the yokes from a dozen eggs. Mix the whites with one-quarter to one-half cup of shredded cheddar or Swiss cheese and set aside while you compile remaining ingredients. 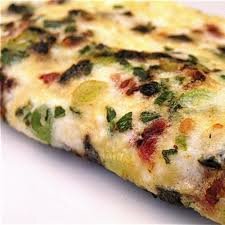 First, slice thinly one-half or more of a large Portobello mushroom into a fry pan. Add a little butter or oil alternative and reduce over moderate heat alternatively covering and removing the cover from the pan. As mushroom pieces darken reduce heat to very low and cover the pan. Add a cup of greens. These can be a mixture of baby spinach leaves, a few leaves of freshly picked and cut-up basil, and a few cut-up scallions. Chives, dill sprigs and cilantro may be cut from the garden and added toward the end for taste. Turn off the heat after mixed greens and green herbs have been reduced a bit–about 30 sec-to- one minute and let the mixture stand covered for another 1-2 minutes.

Cut up 4-5 cherry tomatoes in small pieces and set aside.

Add a little butter or oil and heat a medium sized fry pan. Add the egg white-cheese mixture and heat under medium heat for about 30 seconds. Drain the mushroom-greens mixture and add it down the middle of the developing omelet. Place the cut cherry tomatoes on top and sprinkle with a mix of your favorite dried herbs. Add a little salt and pepper to taste–you won’t need much. Herbs will carry the day.

Flip one half of the omelet over the other and continue cooking over low heat, covering to trap in juices, until done. This may take a few minutes. Be patient. Greens-mushroom-tomato mix will be warm, not cold.

Cut omelet in half. Half for you and the other half for your friend. Omelet goes well with a thick slice of whole grain toast. For those who have trouble with any kind of mushrooms, try garlic toasted tofu as an alternative. Just follow about recipe replacing the sliced Portobellos with garlic roasted tofu–cut in smaller pieces if you prefer.

Richard A. Hudson is a writer, reader and blogger committed to exercise, proper nutrition and health.  He’s interested in politics, economics, alternative energy, gardening and sustainability and has written brief essays on many of these topics on his blog http://richlynne.wordpress.com.  Despite his generally positive and optimistic views about globalization, he wonders whether we will survive current destructive forces that increasingly promote warfare among political and social classes. He is also beginning to think about the declining influence of the know-it-all baby boomer generation just as the next generation born in the 60s begins to slowly stumble into a dominant position in the U.S.