Roxanne Porter recount some of the main health benefits Greek Yogurt has to offer. 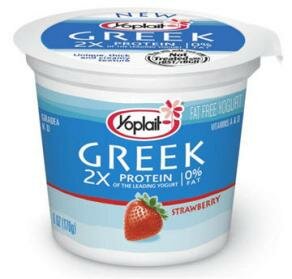 While yogurt on its own has been a big health food option for quite some time now, Greek yogurt has only recently entered the scene as a major player. It has seen a huge spike in popularity over the past few years and is showing no signs of slowing down anytime soon. It’s easy to think of this as the next big diet fad that’s likely to peak and then fizzle, but the nutritional stats on the food are hard to beat, especially when paired with its creamy, almost dessert like texture.

Greek yogurt boasts almost double the protein content of regular yogurt, making it a stellar post-workout recovery snack, frozen yogurt substitute, and an easy way to sneak in extra protein throughout the day. The high protein content keeps you feeling fuller for longer, and each eight ounce serving clocks in with anywhere from 13 to 20 grams.

While the yogurt does have a higher fat content than its regular yogurt counterparts, if you stick to the low-fat or non-fat versions you skip the fat and still get the protein punch. Low fat combined with high protein make it the perfect choice for anyone watching their calories.

The unique straining process that Greek yogurt goes through that eliminates the whey normally found in yogurtsgives it a very thick and creamy texture that mimics frozen yogurt and ice cream more than regular yogurt. The denser texture gives it a richer feel than regular yogurt, which is like a more watered down version.

For anyone following a low-carb diet Greek yogurt is a welcome slam dunk. In the same way that it packs almost double the protein content as regular yogurt varieties, it also slashes nearly half of the carbs, usually coming in under 10 grams.

Following suit with the carbohydrate count, Greek yogurt decreases the sodium content by almost half the amount as traditional yogurts. Since the average person’s diet usually includes much more sodium then you should be taking in, finding healthy, low-sodium foods that can be added into your normal diet is huge.

Plain Greek yogurt has the added benefit of being incredibly easy to substitute into dishes, whether they’re sweet or savory. It tastes similar to sour cream so it easily folds into dips, cheeses, and even as a topper for savory dishes. When it’s mixed with berries, honey, or any other sweet counterparts it easily compliments the sweeter tastes. In both situations you end up getting an extra boost of protein that sour cream or dips typically lack.

When you look at the stellar nutritional stats that Greek yogurt offers it seems unlikely that the food will end up being a fad that doesn’t last. From the rich, indulgent texture to the high protein and low carb content, you just can’t argue with what it brings to the health food table.