The New Football Season QB’s – Are We Focusing on the Wrong Ones?

The New Football Season QB’s – Are We Focusing on the Wrong Ones?

Yes, there is Tebow. Will he rise up to slap Denver in the face, proving that they never should have let him get away? There is Manning. Will he make sure to show Denver that he IS the end all and be all of a megastar they hired to save the day? Or will the other Manning simply head straight back to the Super Bowl in his own quiet way and win yet another ring? Well…what if none of these QB’s matter one iota in the big scheme of things? And, before all Denver and New York fans throw something at their computers and try to figure out how to behead me by the end of the day – what I mean by that statement is, what if the QB of the hour is someone else entirely? Because it’s becoming clear that the 2012/2013 season is  destined to be one of pure and utter ‘Luck.’ 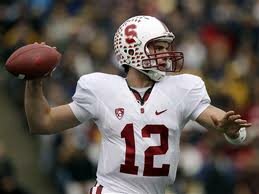 Skill and talent is a must; strength and accuracy is necessary, but a little luck doesn’t hurt. It is Andrew Luck – the rookie QB sitting in Indianapolis – who may just walk away with the whole thing: Rookie of the Year, the Super Bowl…who knows what this guy can do? Seeing as that he’s putting on megastar shows for the fans and is still extremely nice and humble when spoken to – Andrew Luck may just make this the most interesting football season that we’ve seen in a good long time.

Right now Andrew Luck can chalk up two preseason games. I know, that and a bus token right? Maybe he’s hitting on all cylinders way too early for him to carry his team into the final games where his skill will be needed the most. Somehow, I don’t think so. In fact, many people don’t think so. Every once in a while a player will come along that makes people gasp. Even when they don’t like him and are totally routing for their team, there is a sense of wonder about these QB’s that tells the people watching that they will one day join the ranks of the Joe Montana’s of the sports world.

Yes, the Colts actually did lose to the Pittsburgh Steelers but losing wasn’t really what fans walked away with after the game was over in Pittsburgh. In fact, when asked, they actually held a bit of awe in their voices for the rookie – as if Andrew Luck was someone that Pittsburgh needed to really watch out for in the near future.

In a situation where most rookies would be more than a little down and way more than a little confused, Andrew Luck seemed to pull something from inside himself. Fans watched his rookie eyes turn into the eyes of an old, hardened QB who knew exactly what he was doing. In fact, if you believe in possession, this could be it. It was as if the rookie left and Bart Starr came into Andrew Luck’s body as he led the Colts on three scoring drives. Luck showed that it didn’t matter if he and his team was down because they weren’t out – no matter what the Steelers did on the other side of the ball. In fact, if there was more time on the clock I have no doubt that Andrew Luck and the Colts would have won the game.

In a way, watching this young man is a lot like watching Montana back in the day. It is sheer and utter ice water you can feel running through the veins of this guy that Montana used to show every single time he stepped out on the field. It was as if everything else faded around Luck during this game – there was no noise, no fans screaming, no cheerleaders squawking – just Luck and his team in utter quiet as they moved yard by yard down the field. Am I saying he’ll always be perfect? God, no. With Luck being a rookie he will make mistakes. Let’s be honest, even the seasoned QB’s make at least one mistake per game and usually more. The odd part in Indianapolis, however, is the fact that Andrew Luck seems to have the power to make the question, “Peyton, who?” become an absolute reality even quicker than the coaches originally thought.

This preseason is actually (or was actually) all about building for the Colts. A new foundation had to be laid for the team, yet with Andrew Luck’s quick responses and the maturity that he’s showing every time he steps out onto the field – this ‘foundation’ year may end up to be a miracle season that no one was expecting.

Luck has as much poise and determination as the ‘best of the best’ who fall into the category of QB, so it truly will be interesting to see him go from a rookie to a legend – which is basically the only path he can walk. Even the players talk about Luck as having innate ability and timing when it comes to their practice sessions. He can immediately read the coverage and put the ball where it has to go in order to score…without seeming to think.

Luck did waver; he did seem more than a bit angry watching his underthrown pass be intercepted, but the Bart Starr in him kicked in almost immediately and his goal to be the best seemed to hit him square in the eye.

As the preseason continues and the beer starts flowing, there will be many an argument at people’s houses all across the land on Sunday afternoons. The debate of Tebow versus Manning, I have a feeling, will end pretty much as soon as the season starts unless Tebow can pull a strange miracle from somewhere. But Andrew Luck is a name that will be cropping up every single weekend for a long time to come.

Do not be surprised to see the Colts heading into yet another legendary, record-breaking era simply because they are operating behind a leader with strength, patience, talent and…luck!

This Moment in Sports is Brought to you by:  To Gain the “Slight Edge to Get Noticed”  Be First Inc can take you there.