U.S. Basketball was an Unstoppable Force in 2012!

U.S. Basketball was an Unstoppable Force in 2012!

Although it was not a huge surprise when having the names of Durant and James on your roster, it was a nice feeling to see the U.S. Men’s Basketball Team redeem the gold medal by winning their second straight Olympic title on the final day of the amazing London 2012 Olympic Games.

The opponents were from Spain and the score was close – 107-100 – in fact, closer than most people assumed it would be. But when the music came up and the flags rose high 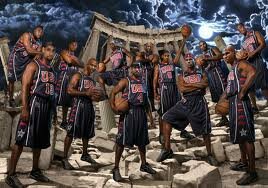 in the sky, LeBron James and Kevin Durant seemed to be on cloud nine as they celebrated their win (for James, his final gold medal, seeing as that there is little hope for the US that he will be in the basketball realm when the next Olympic Games rolls around.)

But it’s not only the men’s basketball team that can celebrate; the U.S. women’s team went five straight this year in their fight for the gold! Of course, with UCONN’s amazing coach, they really were firing on all cylinders before even heading on to the court for their very first game.

Yes, the men are what is the buzz this morning. With Durant and LeBron being the names on everyone’s lips. And in the final countdown, it was actually the closest that the medal game has come in forty years in the Olympics.

As most people say, and I have to agree, even with the ‘big names’ most likely heading away from the Olympic Games when the next Summer Olympics comes to pass in Rio in 2016, the United States ‘talent’ with all its new, young stars coming out of the woodwork, will certainly allow America to have the ‘best of the best’ when it comes to the men’s basketball team going for a three-peat. In fact, a cast of superstars is waiting in the wings already; thus, other countries will always have a big hurdle when it comes to beating the U.S. in men’s and women’s basketball.

A shout out has to be given to the ladies of the hour. After all, the U.S. women’s team didn’t have a close game. Not even close, by the way. They actually produced a full-on rout by beating France 86-50 in order to claim their fifth straight Olympic gold. So, when you think about them heading to Rio in 2016, they will certainly come in as the favorites no matter what superstar shows up in what country across the globe.

They are beyond dominant and have been for sixteen years. Winning 41 consecutive games in the Olympics, the U.S. women haven’t just played basketball they have shown everyone around the globe HOW to play basketball, winning by close to or over thirty points in every game. And as long as the names don’t change on those red, white and blue uniforms (which they won’t in 2016) then the medals will be shiny and gold for America in more Olympics to come. This is most definitely what you would call a legacy.

Back to the men…it was really all about James and Durant. From a huge dunk shot to a must-have three pointer in the final minutes of the game, James showed his skill. And Durant, his ultimate teammate, showed his as he built up his ‘points scored’ to thirty.

Oddly enough the final game was a carbon copy of the one four years ago. Back then their opponents were also Spain in the Beijing Olympics and it took the final minutes to see America come out on top. But, just like four years ago – they did!

LeBron can step away from the Olympics knowing that he and Mr. Michael Jordan are the ONLY players to ever win the NBA title, regular-season MVP, NBA Finals MVP and Olympic gold in the exact same year. Therefore, that is quite an extraordinary accomplishment to say the least. The feelings however that seemed to be filling LeBron’s eyes was that when everything was all said and done, this Olympics is most likely, the end of the road.

Now, for the 2016 games, the U.S. is in a little bit of a mess because the coach is now retired. This was his last Olympics, so not only players’ roles will have to be filled, but also a new leader will need to be found.

In 2016, the leader on the court may just be Kevin Durant, who certainly has proved he’s up for the job and a true star. At 23, he has the gumption, ability and talent to go for the gold yet again, even if some of his teammates will no longer be wearing the red, white and blue.

So…in the end, along with the spectacular job that the UK did in putting on these Olympic Games, the athletes had a ball showing their skills and extreme amount of talent and teamwork in order to create some of the best and most exciting Olympic Game moments that we’ve ever seen.

Will the U.S. keep on winning the gold? Well, the women should unless they all suddenly break their ankles for some reason. And the men…even if they don’t have the firepower they had this year in 2016, they will have the legacy to live up to and the American determination that never seems to go out of style. No matter what critics wish to say, the U.S. of A. is still very much the team to beat! And if you don’t believe me, just look at the 104 medals they’re bringing home!