Jennifer J.L. Jones and Enrique Mora to be Featured at Stellers Gallery of Ponte Vedra 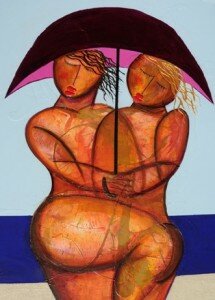 Stellers Gallery of Ponte Vedra will exhibit the work of nationally-recognized painters Jennifer J.L. Jones and Enrique Mora during the upcoming new exhibit. The exhibit opening will be held on Friday, September 7 from 5:30 p.m. until 8:30 p.m. at Stellers Gallery at Ponte Vedra, 240 A1A North, Ste. 13 in Ponte Vedra Beach, Fla.

Jones and Mora each have a body of work that is widely collected and displayed at galleries and private collections. Stellers Gallery has represented Jones since 2004 and Mora since 1988. “We are very excited to bring Jennifer and Enrique together at the gallery and we’re honored to host them in person during the opening. The work will hang in the gallery until the end of September,” said Hillary Tuttle, gallery owner.

Jones is an American artist raised in rural Virginia and the central east coast of Florida. She received her Bachelor of Fine Arts from the School of the Art Institute of Chicago, Illinois. Jones utilizes nature as inspiration for her mixed media paintings, exploring energy and beauty. Nature, as she sees it, is found not only in recognizable organic objects such as leaves and flowers but also in the intangible moments of change. Her paintings appear to be a meditation on this dichotomy with identifiable shapes and forms that float within a mist of color, drips and texture. Through multiple layers of abstraction and combined mediums including a refined glazing technique, she creates rich organic patinas that evoke emotions, thoughts, and universal connecting points in the observer.

Through the layers of paint the viewer will discover an ever-shifting meaning behind each individual work. Jones’ elegant paintings combine a poetic, sensual grace with consistently bold execution.

Jones’ long-established career is highlighted by exhibitions in select international galleries and project collaborations with noted interior designers and art consultants. Her paintings are highly sought after and can be found in numerous private and corporate collections world wide such as the Atlanta Botanical Gardens, Oprah Winfrey/Harpo Studios, Scana Energy, and the U.S. Embassy in Lisbon, Portugal.

Jones currently resides in Atlanta, Georgia and recently published her first book based on her prolific 2011 “Serenata” series, influenced by her month long residency in Italy.

Her newest “Radiant Flux”, series debuted in a solo exhibition in New Mexico this year and will be shown at the upcoming exhibition at Stellers Gallery. She is scheduled for her next artist residency in Provence, France. The paintings inspired by her time in Europe will debut in Jones’ first exhibition in Paris, France, in the spring 2013.  Her work may also be seen at the Besharat Gallery in Barbizon, France beginning December 2012.

Internationally-recognized artist Enrique Mora is a self-taught painter. Mora comes from a family of well-established artists from the island of Puerto Rico. His artworks present a unique mixture of the female form, love and passion, vibrant colors, and an attraction to the ocean.

Mora is a self-taught painter with the use of voluptuous shapes and an appreciation for women that has led to his unique interpretations. He focuses on the many roles of woman as fighters, caretakers and lovers. Growing up in the Caribbean, he was exposed to the lavish shades of the lush islands surrounded by a vast deep blue sea. Color plays a vital role in his art with his unique interpretations of wind-blown hair, a pouting set of ruby red lips, or a cobalt blue skyline.

As a young man, Mora arrived on the Puerto Rican art scene through solo exhibitions and corporate collections, and his father’s gallery in Old San Juan. With a demand for his work and a desire to expand his audience, Mora spent much of the late 1980′s touring numerous cities throughout Puerto Rico, and the United States and Europe while exposing art patrons to his brilliant and sensual tropical flair. Never deviating from the islands and his Spanish legacy as central influences, Mora continues with his curiosity for different landscapes and cultures including the Caribbean, South America, Germany and the United States. He maintains a gallery in San Juan, Puerto Rico and includes Jacksonville as the city where he established himself an artist. Collectors of his work include an international following that extends as far east as Japan.