16 year-old claims achievements are the product of hard work and a unique talent, hot-housed in a ‘medal factory’ since primary school

She is the teenage torpedo, the Chinese swimming prodigy whose devastating performances have already made her the Games’ most talked-about new star. 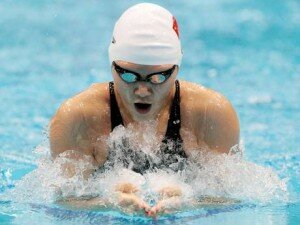 But 16 year-old Ye Shiwen was today forced to deny that her Gold-medal winning achievements are the product of anything other than hard work and a unique talent, hot-housed since primary school.

The whispers began after Shiwen’s phenomenal performance on Saturday, winning the 400 metres individual medley in a world-record time of 4 minutes, 28.43 seconds. Not only did Shiwen shave five seconds off her personal best, her final 50m freestyle was quicker than Ryan Lochte, the winner of the men’s equivalent.

The swim was described as “insanely fast” by the previous world record holder Stephanie Rice. Clare Balding, the BBC Sport presenter, asked: “How many questions will there be… about somebody who can suddenly swim so much faster than she has ever swum before?”

Leonard, also executive director of the USA Swimming Coaches Association, compared Shiwen to Irish swimmer Michelle Smith (now de Bruin), who won Gold in the same event at the Atlanta Olympics in 1996 but was later was banned for four years after testing positive for bodybuilding drug, androstenedione.

Shiwen “looks like superwoman. Any time someone has looked like superwoman in the history of our sport they have later been found guilty of doping,” Leonard said, describing her final 100m on Saturday as “impossible”.

After destroying another field in the heats for the 200m medley, the distance in which she is World Champion, Shiwen addressed the doping question directly. “There’s absolutely no problem with the doping,” she said, according to a translation provided by the official Olympic News Service. “The Chinese team has always had a firm policy about doping.”

That is what concerns many. Chinese swimmers, including a clutch of World Championship winners, failed 40 drug tests between 1990 and 2000, ending a brief period of dominance.

A further five Chinese swimmers were banned for failing drugs tests in 2009 and in March of this year, 16-year-old Li Zhesi, a hot prospect for London, tested positive for EPO in an out-of-competition test.

The Chinese say they have operated a stringent drug-testing regime in the run-up to the London Games. Their current success, which reverses national failure in the pool in Beijing four years ago, is attributed to a scientific method of identifying medal-winning prospects which would be alien to Team GB.

Shiwen, from a working-class family in the Eastern city of Hangzhou, was sent to one of China’s 3,000 “medal factories”, where strength training and dietary advice is prioritised, after a primary school teacher spotted that the seven year-old had unusually large hands and long legs.

She was first selected for the Chinese national team aged 12 and triumphed in the in the 200m and 400m individual medley events at the 2010 Guangzhou Asian Games.

Shiwen denies that she and her compatriots, who include Sun Yang, winner of China’s first ever men’s Gold in the pool, and who was fast-tracked Communist Party membership as a pre-Games “incentive”, are trained like robots. “I think we have very good training, very scientific-based training, that’s why we all have progressed,” she said.

The swimmer, who admitted she was “very satisfied and a little bit surprised by my result” in the 400m medley, could dominate the next three Games. She believes there is “much room for improvement” since she is “very bad at turning”.

Arne Ljungqvist, the IOC medical commission chairman and veteran anti-doping competitor, refused to condemn the new star without evidence: “I have not personally any reason other than to applaud what has happened, until I have further facts. To suspect someone for having done something because he (or she) performed extraordinarily is a bit sad for Olympic sport.”

However Dr Ross Tucker, a doping expert at the Sports Science Institute of South Africa, who analysed Shiwen’s performance, concluded that the prodigy was actually holding back.

“The fact that Shiwen could close as fast as Lochte suggests to me that her efforts over the first 300m of that final took very little out of her. If that is true, then her overall performance is a significant underperformance.”

Writing on his Science Of Sport blog, Tucker argued that drug suspicions were inevitable. “The doping allegations of the 1990s were largely confirmed by officials and sources who reported that doping within Chinese swimming programmes were widespread and institutionalised.

“Does anyone who knows China’s ethos and attitude towards Olympic sport actually believe that they would NOT deliberately dope their young athletes to win medals?”

Although we should be “suspicious” of such a significant improvement in a 16 year-old’s performance, “that is NOT the same thing as condemning someone as a doper, and I would not do that based solely on performance.”

The performance-enhancement innuendo prompted an angry response from Chinese supporters on Twitters. “Don’t suspect other people’s success while you never saw how hard they fought for it,” wrote one. Another asked: “Why doubt her success? She has won the match and that’s it, disgusting BBC.”

The People’s Daily, the Chinese Communist Party’s official newspaper, hailed Shiwen’s “rocket-like” career and called her “one of the great discoveries following the 2008 Beijing Olympics.”