The likelihood of a worker exploding in a burst of toxins increases with age, at least in a species of tropical termite.

Sudden, toxic self-rupture is a mutually destructive move in fights with enemies of the South American termites Neocapritermes taracua, reports ethologist Robert Hanus of the Université Libre de Bruxelles in Belgium. Biologists have described some other termite species with an explosively self-sacrificing caste. But the N. taracuaworkers blow up in a way researchers have never seen before, Hanus and an international team report in the July 27 Science. 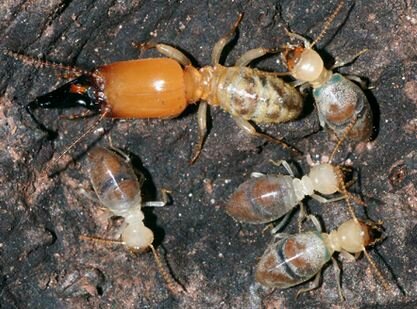 An exploding termite’s body suddenly bulges, ripping open two pouches riding like packs on its back. Their contents, blue nuggets of a copper-containing protein, mix with a product of termite salivary glands that’s released as the inner flesh splits open. The combination turns into a toxin that can quickly immobilize and kill an attacker. “It’s a question of minutes, sometimes seconds,” Hanus says.

Workers don’t start out with dangerous backpacks but develop a pair of blue spots that grow as the termites get older and build up their protein reserves. Younger workers that are spotless, or minimally spotted, do rupture, Hanus says, but it isn’t as effective in killing enemies. And it takes a lot more provocation than it does for the older nestmates.

The likelier sacrifice of the older workers makes sense in the save-the-queen, save-the-colony world of termites, the researchers note. Individual workers can’t reproduce. Their value to the colony is in their foraging and other chores.

Their mouthparts gradually go dull with wear and tear, and their efficiency at feeding decreases. The more worn the mouthparts, the bigger the reserve of the toxin ingredient, Hanus and his colleagues found. So as their other contributions to the colony dwindle, older workers’ likelihood for self-sacrifice in battle increases.

“In contrast, humans are sending the young men to war,” Hanus says. From the termite perspective, “old men should go to war, or old women.”

These termites do have a soldier caste, but its members aren’t numerous enough for all emergencies, Hanus says. The soldiers have such specialized mouthparts that they can’t eat on their own. Workers have to feed them, a limitation on the proportion of soldiers in the colony.

This new study “falls into the ‘amazing natural history’ category, in which social insects have many examples,” says entomologist Francis Ratnieks of the University of Sussex in England. The exploding termites’ suicidal attack is akin to one so familiar that people may forget how self-sacrificing it is: the honeybee sting.