Online Snaps Of Comet Used To Determine Its Orbit

Some people scour the Internet for pictures of celebrities and cats.

Others search for comets.

After performing a Yahoo! image search for photos of Comet Holmes, which whizzed by Earth in 2007, a team of astronomers used the returned images to reconstruct the 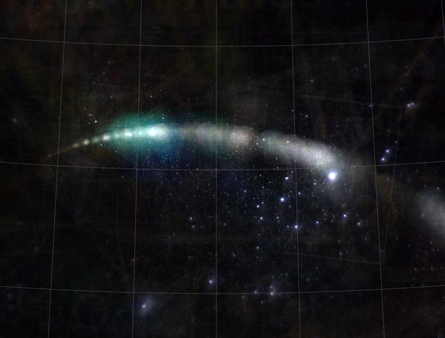 comet’s orbit in three dimensions — proving that astronomers can take advantage of data provided by an unwitting group of participants.

“I think it’s the beginning of something really, really important,” says Harvard University’s Alyssa Goodman of the study, which appears in the August Astronomical Journal. “The biggest deal is the availability of all this data that isn’t being collected for the purpose it was used.”

Though the Internet is crammed with freely available information — trends on Twitter, for example, can point toward breaking news — organizing it into something useful for science takes a bit of skill.

When Dustin Lang, a postdoctoral research associate at Princeton University, decided to harness the power of picture-posting astro-observers, he asked an online computer program called Astrometry.net to filter through the images. Astrometry.net uses the objects in each image — stars, for example — to determine where in the sky the image is located.

Initially, the Yahoo! search returned more than 2,400 images. Those included the comet, as well as pictures of completely different things.

“There were two cats in the original search results. That’s one in a thousand,” Lang says. “I wonder if that’s the going rate for images of cats on the web.”

Lang and coauthor David Hogg of New York University used Astrometry.net to narrow the results to 1,299 usable images — a motley collection of photos snapped in different locations, with different cameras and different exposures. Then the team reconstructed the comet’s orbit in three dimensions — and came very close to the orbit determined by NASA’s Jet Propulsion Laboratory in Pasadena, Calif.

“This is a look at what we could do with really, really heterogeneous data, that we don’t really know anything about,” Lang says.  “It was more work than we expected.”

The team also noticed a spike in the number of images of Comet Holmes posted online during the flyby.

“The one thing this paper exploits is that people really like interesting things,” says Robert Pless, a computer scientist at Washington University in St. Louis. Pless notes that there might be some issues with the method used to track the comet, but he calls the team’s approach “compelling.”

Now, astronomers are assembling an image-based map of the entire sky, an endeavor that will focus on every astronomical object mentioned in the scientific literature over the last 100 years.

And it’s not just astronomy that could benefit from such unwitting crowd sourcing. “There are many other fields where it will apply later,” Goodman says, suggesting that medical images and weather data could also be mined for information. “Astronomy is often the first to do these things — the data are economically valueless, astronomers are very smart, there isn’t a lot of competition.”